This new paper by Dr Laura Mumaw from RMIT in Melbourne and Prof. Christopher Raymond explores the factors that promote or inhibit the proliferation of wildlife gardening. They studied the Gardens for Wildlife Victoria network in Australia, which supports citizen-agency co-development of municipal wildlife gardening programs.  Over the past 3 years, it has expanded from one program to 39 initiatives in various developmental stages in 49% of the local government areas in the state of Victoria, Australia. Six interlinked factors influenced the rapid scaling of the program: empowerment of actors; a civil-agency co-design and delivery model; conservation framing; links to and between landscapes and communities; resources – particularly time; and the network’s role in promoting innovation and shared learning. For more information see: https://doi.org/10.1016/j.jenvman.2021.112745 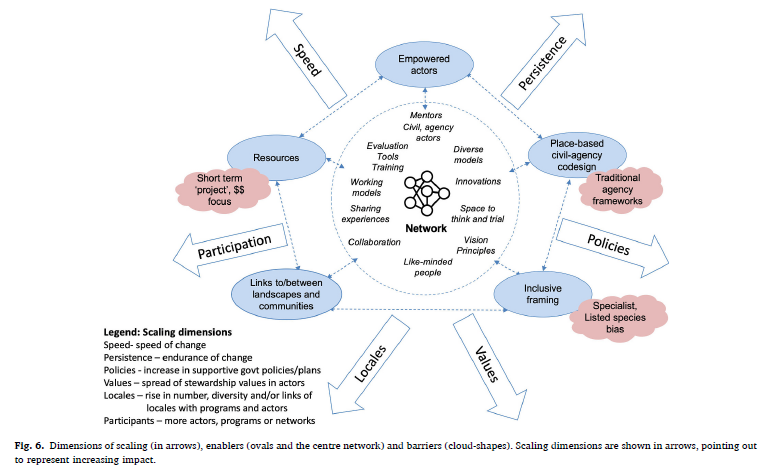 Urban green spaces are central to human well-being. Parks, playgrounds, remnant forests and grasslands are platforms of aesthetic, restorative and social experiences and provide the backdrop for many human-nature relationships in cities. However, it has long been recognized that green spaces also take part in the dynamics of carbon capture and storage in urban areas. Urban vegetation, whether planted or spontaneous, captures carbon dioxide from the air and, in time, either releases it back to the air or helps accumulate it to the soil. This capture and potential storage of carbon links urban green spaces to studies on mitigating the consequences of climate change in urban areas.

Without inclusive and just approaches to green space planning and design we run the risk of creating green spaces that are efficient in carbon capture but enjoy little support from local communities. The key to avoiding this and pinpointing sustainable, long-term policies for advancing the capture and storage of carbon in urban green spaces is understanding what makes green spaces efficient in carbon capture and storage and simultaneously respecting other needs and desires associated with green spaces. Equally important is to implement these policies in ways that respect the needs and desires of not only the majority of urban residents, but also minorities and those less represented in decision-making.

Quite the complex mess, right? Research at the CO-CARBON project, a Strategic Research Council (SRC)-funded consortium combining several universities and countries, aims to untangle this complex issue. The project revolves around the concept of carbon-smart green infrastructure, and Work Package 3 of the project focuses especially on the social understanding and acceptance of “carbon-smartness” as a feature of green infrastructure. Carbon-smartness here refers to features or qualities of green spaces that advance carbon capture and storage but also provide co-benefits to ecosystems and human wellbeing. Already this spring, surveys concerning the understanding and valuation of carbon-smartness are under way in Helsinki. For a peek at what is perceived as carbon-smart, have a look at the picture below: 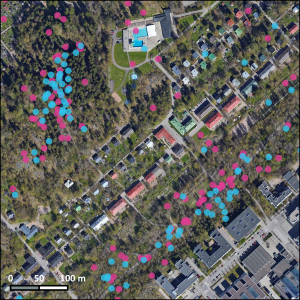 Examples of green spaces perceived by residents to be personally important (pink) or carbon-smart (blue) in a city district in Helsinki, Finland. Aerial image © GoogleSatellite.

Pink dots represent green spaces local residents in a specific area in Helsinki consider as personally important, while blue dots represent those that the residents consider carbon-smart. There is still much to analyze, but one thing is already clear: carbon-smartness is something residents value in different ways, with both positive and negative connotations, and something that they are able to identify in their local neighborhoods. Personally, I cannot wait to dive into the survey responses properly – this is research at its most satisfying!

More information about the CO-CARBON project may be found here: https://cocarbon.fi/en/

More information regarding carbon capture and storage in urban green spaces, the environmental justice aspects of green space design may be found, e.g. in these articles:

ENVISION is a 3-year Biodiversa project funded under the Horizon 2020 ERA-NET COFUND scheme, with additional support from the Belmont Forum.  It seeks to create  more inclusive approaches to protected area management that enhance biodiversity conservation and human well-being.  This week we held our Sierra de Guadarrama National Park site meeting via Zoom given the COVID-19 situation.  We learnt about how the various ENVISION tools could support protected area management, and how to better align our new tools and processes with applied outcomes. 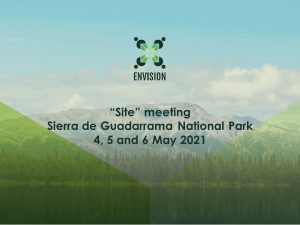 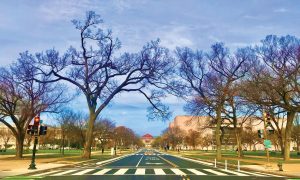 Outdoor recreational areas provide us a range of experiences especially when we find ourselves surrounded by nature. There has been a focus in research and planning on the visual features of urban landscapes. Yet, we hear places as much as we see them.

Researchers from the Human-Nature Transformations group are studying how citizens perceive and experience their everyday living environment through different senses. How pleasant, disruptive or restorative are views of the forests or views of the sea? How pleasant or unpleasant are the sounds of children playing in a residential yard or bird songs along a daily walk?

In the study, Public Participation GIS (PPGIS) data is collected from local residents living in the two rapidly developing neighbourhoods in Helsinki – Kalasatama and Kuninkaantammi. Residents are asked about the importance, values, and meanings of different green and blue spaces in these areas. They are also asked to map pleasant and unpleasant sounds in their neighbourhood. The survey collects valuable social data on how to plan and manage healthy and attractive urban green spaces, while also accommodating for citizens’ well-being and recreational needs.

The survey is open from March 2021 until May 2021. It is conducted by University of Helsinki, in partnership with the Finnish Environment Institute (SYKE) and Forum Virium Helsinki (City of Helsinki).

For more information about the survey, contact Silviya Korpilo at silviya.korpilo(at)helsinki.fi.

Let’s get right down to the basics: what do we mean by human-nature transformations, anyway? Our interpretation is that the relationships between humans and nature are inherently diverse, dependent on the infinite interactions between cultures, times, environments, technologies, and humans themselves. Because of this, our research operates on the belief that transformations towards a more sustainable future require inter- and trans-disciplinary approaches, which recognize these diverse relationships.

We started this blog as a platform for sharing our research with a wider audience, including those outside of the scientific community. Ultimately, we find that as researchers in our respective fields, we tend to speak to other researchers in those same fields, a cycle that limits the impact of our work and the validity of our ideas. These silos create boundaries not only within the research community, but also between researchers and members of the community, including residents and policy makers. Our group is working with the goal of positively affecting sustainable lifestyles around the world, and our aim with this blog is to make our work accessible to a wide range of individuals.

Our group’s research interests and methods are diverse, and we intend to reflect that in our writing here. We are also engaged in multiple research projects internationally and within Finland, including ENVISION, SMARTer Greener Cities, VIVA PLAN, and CO-CARBON, in addition to our own work. With this blog, we hope to produce something that scratches your interest, and helps stimulate discussion about the future of research for human-nature transformations.