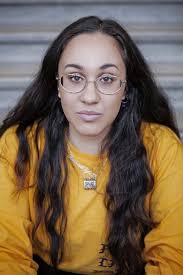 When confronted with the idea of a “dream job” I was unsure of what this actually meant and had a lot of trouble identifying what kind of position would be my ideal job. Having embarked on my own complex and winding professional journey, I found myself a little lost with which direction I should head after completing my studies. However upon doing a little “soul searching” I concluded that I wanted to interview someone who had forged their own career path. Luckily I was able to find someone who has not only created their own website and but is also opening up opportunities for others along the way, Koko Hubara.

Koko Hubara is the editor-in-chief of Ruskeat Tytöt, “Brown Girls”, the first Finnish website for Brown People by Brown People. She also has worked as a freelance journalist, in the field of social work, as the Executive Editor for Basso Magazine and recently published her first book, Ruskeat Tytöt. I was incredibly inspired by our conversation as she explained how her work and career path was cultivated through her own personal vision and drive.

Before getting into blogging and creating Ruskeat Tytöt, Koko pursued a career in social work and communications, specializing in child protective services. She worked on creating online services for children whose parents suffered from addiction. At the same time she also worked as a free-lance journalist, eventually became the Executive Editor for Basso Magazine.

During our interview we spent a lot of time discussing the origins of Ruskeat Tytöt. Koko said that it started on a whim, as a blog where she could discuss issues important to her.   For example what it is like being a person of color in Finland and feeling like an outsider in your own country. As the blog began to gain more readers and more exposure she realized that she was carving out a much needed media space for people of color in Finland.

Transitioning the blog into a website meant that Koko had to use all of her resources and pour them into the site. This meant using all the savings she had and recruiting writers and graphic designers she knew. Koko discussed how when creating her website she needed to learn how to balance doing things by herself and getting help from others. This venture was a huge risk for her but has proved to be successful as Ruskeat Tytöt launched in March 2017.

Throughout our talk Koko explained that even though she has worked in different fields, in each job she collected a certain set of skills that could be used in the future. For me this directly correlates with what we have been discussing throughout the course, being able to recognize, understand, and promote your own skills. My biggest takeaway from our conversation was that to be successful you have to be passionate about your work, always consider the skills you have acquired, use every connection you have and take risks. Although I began this assignment at a lost with which direction I should head in the future, after the interview I found myself incredibly inspired to start working on my own projects and constructing my new career goals.