The INTERTRAN Research Group is an interdisciplinary research group for sustainable law and business. The group’s central idea is to contribute to sustainable development while maintaining a strong focus on a sustainable circular economy, international transport and global value chains.

Throughout the academic year the INTERTRAN Research Group organizes a variety of events. On a monthly basis, we hold a research seminar where members of our group present ongoing research and recent publications. At irregular intervals, we organize guest lectures with speakers from a variety of fields on topics related to transport law and logistics. The InterTran group also organizes a lecture series on international and maritime law in collaboration with the Finnish Maritime Law Association (CMI). 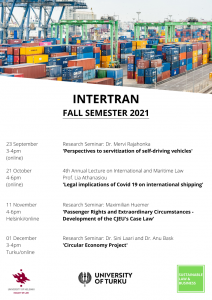 The US and the whole Western Alliance withdrew from Afganistan by the end of August this year, markedly to avoid being present there during the 20th anniversary of 9/11 strikes to the World Trade Center twin towers in New York back in 2001. The US together with its allies invaded in Afganistan to defeat the Taliban administration and to squeeze terrorist organisations, most notably Al Qaida, using Afganistan as its base.

The strikes in New York launched something that was politically called ´a war against terrorism´, which led to real warfare in Afganistan and Irak. In the home front, governments and international organisations took extensive efforts to make logistic chains more secure, and largely succeeded in doing so.

Who takes care and who pays what?

Unfortunately, there is always the other side of the coin in that those involved in international trade must comply with new regulations and red tape. Usually, these measures have coincided with export or import clearance and have been ordered by governments.

The Incoterms trade terms, nowadays Incoterms® 2020, establish a division of tasks, costs and risks between the seller and the buyer in an international sale of goods transaction. This also applies to measures to tackle security concerns. Each Incoterm defines, whether it is the seller or the buyer to take care of the security measures, or at least to pay the costs. Although the rules do not mention it, freight forwarders and other middlemen such as customs brokers usually take care of the tasks on behalf of their clients, sellers or buyers, or often both at the same time. Costs and risks are obviously borne by the clients although freight forwarders and other middlemen have their liability.

The events of 9/11 led to the establishment of new protocols for tracking and screening cargo both in the United States and in foreign countries. These protocols have been incorporated into international frameworks such as those under the World Customs Organization (WCO), and in country-specific programs such as the Container Security Intiative (CSI) and the Customs-Trade Partnership Against Terrorism (CTPAT) administered by the United States. In addition, many countries, including Australia, Canada, Sweden and New Zealand introduced new cargo security programs following 9/11 or have strengthened previously existing programs.[1]

The events of 9/11 precipitated a change in cargo security measures at national borders. Prior to 9/11, customs authorities were responsible primarily for clearing imported goods after such goods arrived at the border. They did so through the review of entry documentation accompanying such goods at the time of importation and, if necessary, their physical inspection. In contrast, the cargo security programs developed after 9/11 emphasize preshipment examination of exports. In particular, these programs require that exporters provide customs documentation in advance of their shipment of goods to the importing country. Such advanced documentation assists customs authorities employing sophisticated and multilayered risk assessment techniques to determine whether to admit goods at the border or to hold them for further inspection.[2]

The European Union has implemented the AEO program through its customs legislation, most lately in the Union Customs Code that entered into force in 2016. Under the AEO program, reliable and customs-compliant traders will benefit from the streamlining of EU-Member State customs procedures and/or from facilitation with customs controls related to supply chain security or from both. Benefits for operators granted AEO status—dependent on the type of AEO certificate granted—include, among others, the simplification of customs procedures, fewer physical inspections and documentation requirements, and priority treatment for shipments.

Under the program, EU-Member States grant AEO status to an economic operator involved in the international supply chain that is able to demonstrate a history of compliance with customs requirements, appropriate record-keeping standards, proven financial solvency, and adequate security and safety standards. Economic operators eligible for AEO status include manufacturers, exporters, freight forwarders, warehousing firms, customs agents, transportation firms, and importers. The program is voluntary; economic operators may apply for AEO status through an application process to determine program eligibility based on the criteria outlined above. The application process involves a security self-assessment followed by a formal assessment by the customs authority of an economic operators’ risk.

On top of the WCO, the World Trade Organisation (WTO) has adopted an Agreement on Trade Facilitation, which entered into force in February 2017 and applies only to the WTO members that have accepted it. The Agreement calls for member states to adopt or maintain a risk management system for customs control and design and apply risk management in a manner as to avoid arbitrary or unjustifiable discrimination, or a disguised restriction on international trade.[4]

Acknowledging the importance of the maritime sector to international trade, the International Maritime Organization (IMO) established new security measures following the events of 9/11 to ensure the safety of maritime ports and cargo. These measures are outlined in the International Ship and Port Facility (ISPS) Code, which entered into force on July 1, 2004. The code is divided into two parts: the first part contains mandatory guidelines on security plans to be established by ships, shipping firms, and ports. National governments are responsible for overseeing the implementation. The second part of the framework provides recommendations on how to execute port security plans.

On a practical level, the ISPS system effectively closed port areas from outsiders. Shipowners contribute financially to the system but swarm it over to their transport clients through an ISPS fee levied together with the freight. Moreover, as from 2011, all shipments to the European Union ports must be accompanied by an Entry Summary Declaration, ENS.

Post-9/11 security measures on air cargo have been discussed both at the national and international level, but unlike measures for maritime cargo, such measures have not been codified under a single agreement. Prior to 9/11, the International Civil Aviation Organization (ICAO) established standards for shippers, freight forwarders, and transportation firms to maintain the security of cargo while in transit.

The first set of Incoterms published after 9/11 was Incoterms® 2010. Security measures were dealt with under the heading ´Licences, authorisations, security clearances and other formalities´ (A2-B2) The starting point was that security requirements are as a rule established by the country of import requiring documentation. As it is the buyer, who normally is responsible for import clearance (save the DDP), the buyer is responsible for the security checks and declarations. The problem is that these measures either precede the shipment, or the carrier, often contracted by the seller gives the ENS. Incoterms® 2010 prescribed cooperation requirements in Articles A10-B10 for the parties to meet the obligations as well as an obligation to cover the the trading partner´s costs (Articles A6-B6) in doing so.

Incoterms® 2020 has continued the policy adopted in Incoterms® 2010. The system makes sense on a theorical level but may cause too many difficulties on a practical level and thus becomes ignored.

It is submitted the same system could work well with security checks and declarations.

New frontiers of security and safety

The words security and safety have a less sinister meaning connected to transport technology. Traders act as shippers in maritime transport and must contribute to transport safety in various ways. The shipments of dangerous cargo are subject to a special legal regime. Container weight has an impact on the stability of a container vessel. The IMO SOLAS Convention was amended by CHAPTER VI – Carriage of Cargoes provisions (the so called SOLAS VGM), which came into force on 1 July 2016.  The shipper is obliged to notify the verified gross mass of the container to the master of the ship. Also in road transport, security concerns are relevant, and the party loading the goods on truck is normally contractually obligated to take care of lashing and securing the goods although the carrier normally bears the ultimate responsibility for transport security.

Early this year, there were far-reaching plans in China make the sanitization of containers mandatory to tackle Covid-19. To my knowledge, such measures have not been put in practice. Nevertheless, the issue may still become reality in this context or in a future one.

On the initiative of ICC Finland, Incoterms® 2020 now recognizes a new concept, namely ´transport-related safety measures´, which is now detached from the articles covering licences, authorisations, security clearances and other formalities (now A6-B6) and added to Articles A4-B4 covering transport. Either the seller or the buyer is thereby responsible for transport-related safety measures, including costs arising therefrom. Incoterms® 2020 is unfortunately silent on what these measures and costs are. Moreover, it is stated in the Introduction of the publication that the Rules do not address the SOLAS VGM obligations or costs.

It is possible that sellers and buyers will be subjected to new obligations, for instance relating to CO2 emissions or other environmental charges, connected to the transportation or importation, due to which careful classifications must be made when drafting the next version of the Incoterms. The division of tasks and costs must be both logical and practical. It does not make sense for companies to invoice small sums from each other to meet their obligations under Incoterms. As this is invaraibly not done, such provisions become dead letters.

Personally, I would like to reserve the word ´security´ to the combat against terrorism and address in parallel transport ´safety´ meaning technical safety such as ship stability after the measurement of           container weights. But this is a matter of language, which should not dominate the discussion. In the Finnish language, both words namely translate into ´turvallisuus´.

[4] See the Agreement at https://www.wto.org/english/docs_e/legal_e/tfa-nov14_e.htm.