Due to the COVID-19 pandemic, the conference has been postponed and will take place online in 27-29 October 2021. More information on the conference site! 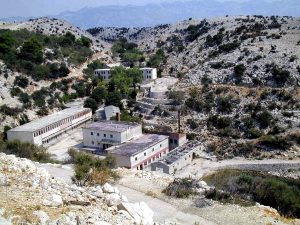 In three different parts of the Balkan Peninsula, one can find the remnants of island prisons.

Perhaps the best-known prison island is Goli Otok (naked island, pictured) off the Croatian coast. This island hosts a prison that was established in the early days of Socialist Yugoslavia.

The island had no other inhabitants. It has been used a prison previously, during the First World War, Austrians kept captured Russian prisoner of war there.

Following the dramatic Tito-Stalin ‘split’ of 1948, a prison camp was established for political prisoner suspected of loyalty to the USSR. However, a broad category of political prisoners were incarcerated there; veterans of the Spanish civil War, even of the October Revolution. Some were losers in power struggles within the Yugoslav Communist Party, and were feared as potential rivals by Tito.

The camp was in use from 1949 until 1956, when tensions with the USSR eased. The camp was thereafter used as an ordinary prison, and closed in the 1980s.

There was a smaller prison island nearby called Sveti Grgur (Saint Gregory), which housed female prisoners.

In a grim way, the Goli Otok camp was an exercise in Tito’s vaunted workers’ self-management (radničko samoupravljanje). In this particular case, it meant that the first prisoners on the island had to build the facilities – barracks and workshops – but also the inmates themselves would run the camp, though supervised by exterior guards. This led to a brutal hierarchy with the camp. The supposed idea behind the camp was ideological re-education, and the collective beating that greeted new arrivals (‘running the line’) was to impose conformity. The prisoners that cooperated rose in rank.

The term ‘camp’ (logor) was forbidden, as it would associate the site with Nazi or Soviet camps, which it, of course, resembled.

The camp’s existence was kept a secret for many years. Secretive too is whose idea it was to establish it. According to historian Martin Previšić, who has published a book on the history of the camp, it seems that no one individual can be identified. Its location was surely a factor; there was both a port and a railway close by on the mainland.

Goli Otok is now a tourist destination – day trippers on the coast can organize boat trips to see the “Croatian Alcatraz”. Unlike the famous site off San Francisco, nobody – despite rumors that cling to all prisons – ever escaped from the naked island.