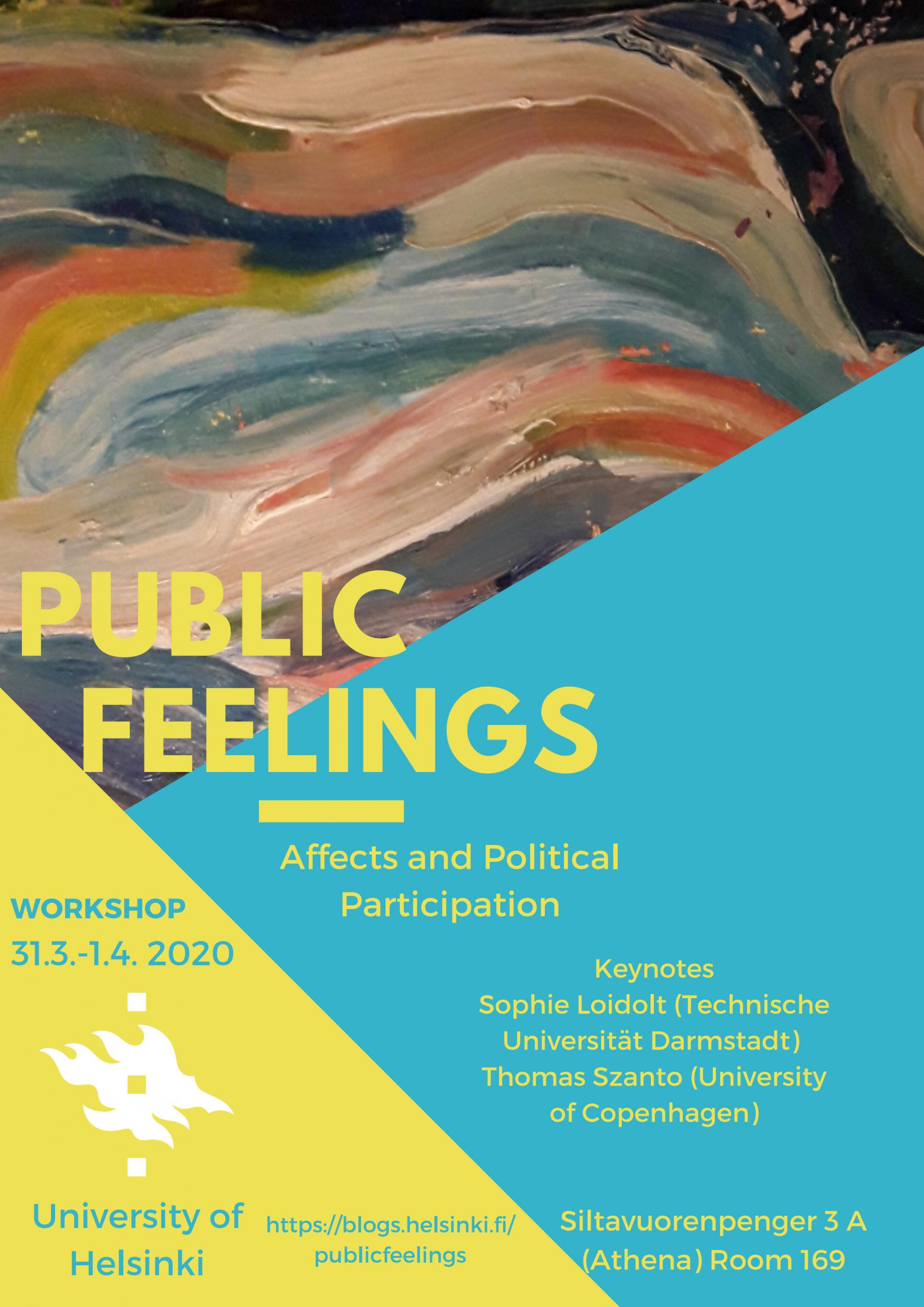 16:15-17:45 Public feelings
Minna-Kerttu Kekki (University of Oulu): Reproducing and renewing meanings by affective encounters with others in public discussion
Mattias Lehtinen (University of Helsinki): Feeling political change? The role of affects in the transformation of political ontologies

In the 21st century, the motivation to transform and renew political theory seems to be self-evident. The “populist backlashes” across European countries combined with the rise of right-wing parties and governments around the globe has given impetus to talk about a crisis of democracy. In the workshop we are interested in examining a broader transformation in political theory that addresses the underlying problems behind democratic crises in the 21st century. Instead of analysing different challenges to liberal democracies, this workshop focuses on the foundational question of affects and political participation in political theory.

In this workshop we will discuss the public sphere and political participation from the perspective of affects. Since the early 2000s there has been significant interest in affects and the role played by them in democracies and political participation. Focus on phenomena such as “affective regimes” have enabled theorists to critically assess democratic theory and its presuppositions, such as the Habermasian emphasis on rationality. Instead of making normative claims about how emotions impair deliberation, the focus on affects enables us to deepen our understanding of democratic participation and to reflect critically on our assumptions about contemporary politics.

The aim of the workshop is to bring about a more profound understanding of where the true critical junctures of democracy may lie. The affective register is present in the democratic fervour of individuals participating in public discussion, the various strategies of representatives when appealing to the public as well as in the collective efforts to form political subjects that act on, and in, democratic decision-making. Understanding the role of affects is thus vital to the analysis of our current democratic situation.

The conference will be held at the University of Helsinki, March 31. – April 1. 2020 and is open to everyone without registration. If you have any questions concerning practicalities, do not hesitate to contact tuukka.brunila (at) helsinki.fi. The organizers are unfortunately unable to aid in either travel or accommodation arrangements or the cost of travel or accommodation.