RECOGNITION-project hosted a NOS-Hs funded workshop “Rethinking Youth Employment– Work, Policy and the Changing Welfare State in the Nordic countries”, May 18-19th in the University of Helsinki. 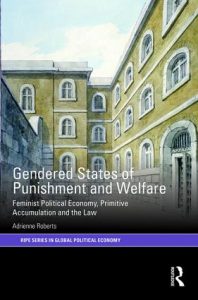 Criminalizing Poverty: Unexplored Dimensions of the Gendered Neoliberal State’. Building on the arguments developed in her recent book Gendered States of Punishment and Welfare, the keynote lecturer of the workshop Adrienne Roberts (University of Manchester) talked about the gendered nature of the governance of poverty and criminality under neoliberalism. Roberts argued that the analysis of the punishment of the poor should take into account not only the dynamics of production but also social reproduction to see how restructuring of the state produces specifically gendered forms of precariousness, which has resulted in an increase in women’s criminalisation.

Johannes Kananen (University of Helsinki) discussed recent trends in the Finnish workfare policies. Kananen discussed how current reforms’ rationale increasingly draws on neoclassical economic theories with a belief that employment rates can be increased through the management of the supply of labour.

Josien Arts (University of Amsterdam) presented a co-authored paper with Marguerite van den Berg titled ‘Pedagogies of Optimism’. The paper discussed how the control over and the management of the unemployed in activating welfare programmes in the Netherlands are based on mobilisation of affects and affective citizenship, when the unemployed are taught to ‘look forward’ and be optimistic – despite being channeled to very insecure jobs.

Lisa Adkins‘ (University of Newcastle, University of Tampere) and Hanna Ylöstalo‘s (University of Turku) presentation was dedicated to the case of Universal Basic Income in Finland. According to Adkins and Ylöstalo, the experiment with UBI is based on the application of behavioural economics to manage the unemployed via working on their ‘wellbeing’. UBI should be thus understood as an attempt to enhance immaterial capacities of labour supply, as Adkins and Ylöstalo argued.

Elina Paju, Daria Krivonos, Lotta Haikkola and Lena Näre (University of Helsinki) presented a joint paper, which is an outcome of RECOGNITION-project’s multi-sited ethnography of young people’s employment in Helsinki region. The paper proposed the notion of ‘human capitalisation’ to understand how youth activation programmes saw young people as being ‘human capital’, which should be maintained at all times. While labour market is becoming increasingly flexible and deregulated, young people involved in activation programmes are taught to embrace themselves as being ‘human capital’ through investment in their bodies and selves.

Jaana Lähteenmaa (University of Helsinki) discussed different types of coping strategies in relation to activation that unemployed young people develop. Lähteenmaa showed how young people learn to navigate activation not as a possibility structure but a ‘structure of impossibility’, and how some young people prefer to drop out from the benefits programme not to feel humiliated and controlled.

Based on the papers, the workshop participants are preparing a Special Issue on Labour Activation edited by Lisa Adkins and Lena Näre.

The workshop was funded by a 2016-17 workshop grant from the Joint Committee for Nordic research councils in the Humanities and Social Sciences (Nos – HS).