Till my undergraduate degree, my knowledge of Finland was very limited. I knew that Helsinki was its capital, it was in Northern Europe and days were short and cold in winter and long and warm in summer. I certainly did not think I would have a chance to experience those short, cold winter days and long, warm summer ones first hand or that I would find myself in circumstances that would expand my awareness of the country I now call home.

So how does a girl from Bangalore, India end up doing a research masters in social psychology in Finland? I would like to think that the stones were set in motion when I made the decision to do my undergraduate degree at the University of York, England. On arriving at my student accommodation in York, one of the first people I came into contact with was a Finnish girl who ended up being one of my closest friends at university. She also introduced me to her brother who I have been in a relationship with for over three years so you can probably guess part of my motivation behind my choice to pursue a master’s at the University of Helsinki. However that wasn’t all. In the course of my undergraduate degree, Finland kept coming up in a lot of my lectures on Social Policy as the ideal country that could teach other countries a thing or two about progressive policies particularly pertaining to maternity leave, childcare, gender equality and free education.

I admit, the prospect of living in a country that was held up as a measuring stick for other countries did appeal to me particularly as gender equality does not really exist in India. Moreover, I have always believed that education should be free as it is a right, not a privilege and the fact that Finland extends this right not just to its own citizens but to international students as well is what really cinched the deal. I applied for the research master’s in social psychology and crossed my fingers. I did not think life could get any better when I got my acceptance email and then I was informed that as an international student, I could apply for a grant that would ease the financial stress of living in Helsinki. I did so right away as receiving such a grant would mean that I would not be such a drain on my parents’ resources who are still help me out financially. Months went by and I did not hear back about the grant so I forgot all about applying for it until I received an email telling me that I had been awarded the funding. I remember my mother’s shock on hearing that not only was my education free, but the university was actually giving me money to study in Helsinki. 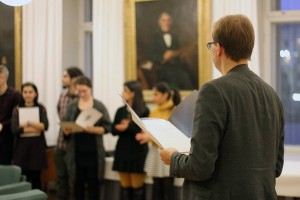 The grants were presented to awardees at a formal ceremony in November held at the University main building. I could not believe that out of 122 applicants, I was one of the lucky 46 to have received it. Champagne was popped, hor d’oeuvres were served, a pianist played in the background and inspiring speeches were made, the main message of which was that the university genuinely needs and wants international students, not to boost ratings or add to a token international quota but because international students come with different perspectives and cultural backgrounds that enrich the university both culturally and academically by stimulating innovative research. The awarded students represented 21 different nationalities and I felt genuinely valued as an international student then because prior to that, I had never seen my potential to give something back to the university. In fact, I was almost suspicious that the university wanted to give me so much as I felt I had no way of reciprocating their generosity. It was a nice feeling to know that my ideas, world view and culture had the potential to contribute to the university and I feel more motivated to use this potential. And in my free time, I plan to make the most of the grant by experiencing more of Finland (I’ve heard Lapland is beautiful in autumn).

This piece was written by Keshia Dsilva, a first year REMS student.

701 thoughts on “International love: Getting the International Student Grant and how I ended up in Helsinki to begin with (by Keshia)”