During this spring, the STRAPPA team has hosted visiting scholars from our UK partner project “Reframing Russia for the Global Mediasphere” (University of Manchester and Open University). On May 17, our most recent visitor Dr Rhys Crilley (Open University) held a lecture titled “Understanding RT’s Audiences: A Cluster Analysis of RT Followers on Twitter” at Aleksanteri 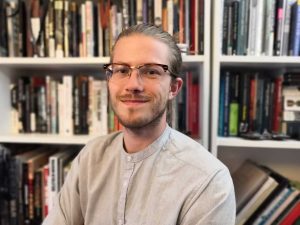 institute. After the lecture, Rhys gave us an interview about his ongoing research with Dr Alistair Willis and Professor Marie Gillespie as part of the Reframing Russia project. For more information about the project and an overview of recent publications, visit the project website.

You recently gave a lecture in Aleksanteri institute on RT’s audiences in Twitter that you and your research team have examined with cluster analysis. What can we learn with this research?

Our research is still a work in progress so our findings are quite tentative at the moment! Basically, there is a growing sense of controversy around RT in places like the US and the UK. In the US, RT has had to register as foreign agent, and in the UK RT could potentially lose their broadcast license as they have breached broadcasting rules around impartiality in their coverage of the Skripal poisoning. In this context, there are lots of claims from ‘western’ politicians, intelligence agencies and journalists about how RT is helping to ‘hack elections’, with some even claiming that RT has a ‘huge western audience that wants to believe that human rights are a sham and democracy a fix’. However, there is very little reliable information about who exactly RT’s audiences are. Even though there is a burgeoning body of academic research on RT’s broadcast and social media content, there is still very little that looks at their audiences.

This is where our research comes in. By using computational methods and sociological analysis we’re attempting to understand who RT’s audience is. One way we’re doing this is to study RT’s twitter followers. We can gather information about RT’s twitter followers, and we can see who else they follow. So what we are trying to do is to group similar followers together based on their interests.

When we started, we kind of expected to find big groups of RT’s twitter followers following lots of other anti-elite, anti-western, and politically radical accounts, but this has turned out to not be the case. The majority of RT’s twitter followers are mainly interested in following other news sources such as the BBC, CNN, and the Washington Post. The size of the cluster predominantly following anti-elite and right-wing accounts such as Julian Assange, Wikileaks Alex Jones, and Infowars (our data is from before these last two were kicked off Twitter) includes approximately 5% of their followers. So, the main thing we seem to be learning from the research we’ve done so far is that RT’s audience isn’t as politically radical, polarised, or in an echo chamber as one might think.

Do you think RT might have conducted similar research on their audience groups?

Presumably. Most international broadcasters do audience research to understand what makes their audiences tick, and what makes them click – and by using the metrics provided by social media platforms they can see what content performs well and goes viral. From what we gather, RT’s journalists do seem to be motivated by the number of shares and likes that their content generates. Though this is hardly specific to RT, as most international broadcasters use social media metrics to judge their reach and performance.

We’ve just started to add a comparative element, so our sample size for the twitter followers of the BBC World Service, Al Jazeera, and CNN is a lot smaller. Compared with these broadcasters, RT has a larger proportion of the audience who follow celebrity accounts – so this seems to suggest that RT’s twitter audience is perhaps a bit more interested in ‘soft news’. This also reflects RT’s somewhat informal style, and how, for example, many of their best performing videos on YouTube are about human interest stories or natural disasters.

Other than Al Jazeera, RT also has more twitter followers who follow Arabic language accounts and news outlets, and this suggests that RT has been effective in gaining a following in the Middle East.

What are the most interesting follower clusters?

Our research suggests that RT’s anti-elite cluster of followers is small (only about 5% of their twitter followers) and so far, we haven’t found this cluster with any of the other broadcasters. We think this is interesting, and it seems to suggest that RT’s audience is slightly more anti-establishment than those of the other broadcasters. However, the small size of this cluster appears to undermine claims that RT’s audience is mainly composed of radical conspiracy theorists who don’t believe in democracy.

While RT is famous due to its political content, it also include soft news to their coverage. Does this help them to attract more audiences?

I think so. RT’s informal style, use of humour, and its willingness to innovate seems to gain them a following. For example, their 1917LIVE project which re-enacted the Russian Revolution of 1917 as if it was happening on twitter throughout 2017 has proved to be quite a hit. It gained a large following online has won multiple awards. Through focus groups with followers of this project we found that people enjoyed how RT used modern technology to tell stories about a historic event. Through a few other case studies we’ve found that people also like how RT uses humour, although we have also spoken to some people who have suggested that they find some of RT’s media coverage ‘too tabloidy’ – so the soft news aspect can attract, but also repel certain audiences.

I am really enjoying working with colleagues on the Reframing Russia project, and we’re doing lots of exciting interdisciplinary research as a team. We currently need to finalise our cluster analysis paper, and we’ve got a paper nearing completion on RT’s representation of the World Cup and audience response to that. We’re also working on RT’s coverage of the Syrian conflict, so we have a diverse range of insights into RT’s media coverage and audience responses to different events and issues.

Ultimately I’m interested in the politics of digital media, popular culture, and the everyday, and I’ve explored these things in different contexts. I love collaborating with wonderful colleagues such as Dr Precious Chatterjee-Doody, who I have worked with on many things including RT and populism, as well as a few other things we have forthcoming. Professor Marie Gillespie and I have recently written about social media’s impact on journalism, whilst with Ilan Manor I’ve studied the relationship between framing theory, narrative, and digital images through a focus on the Gaza War of 2014. With Professor Robert Saunders, I have also written about popular culture, Scottish identity and resistance through a study of a pub toilet! In the future I hope to keep collaborating and studying the intersections of media, culture, and everyday understandings of global politics.

Through my thinking about the age of ‘post-truth’ politics, my research is currently developing in a way that pays further attention to emotions, and how people feel about issues in global politics. So hopefully I’ll get to do more work on that in the near future.