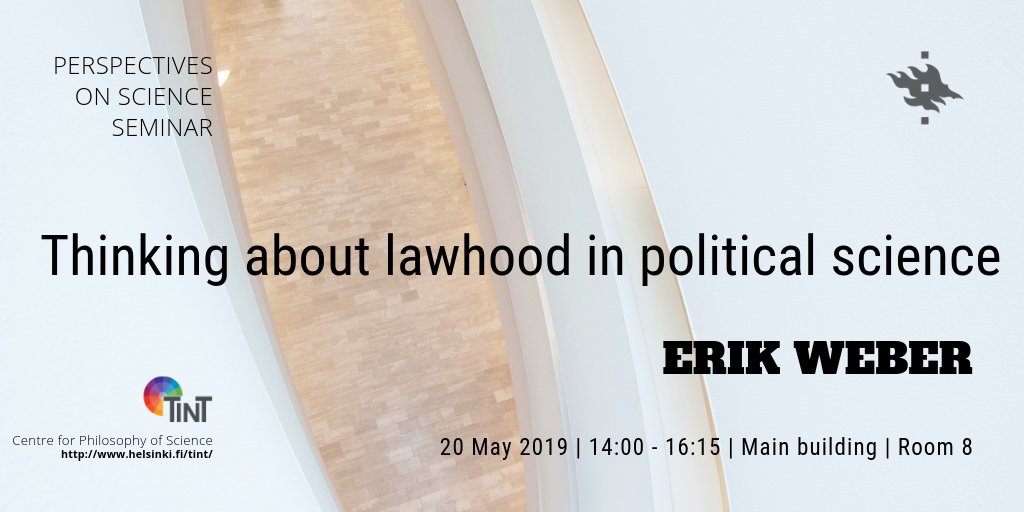 At the next Perspectives on Science seminar (Monday 20.5.), Erik Weber (Ghent University) will present his paper entitled “Thinking about Lawhood in Political Science”.

Perspectives on Science is a weekly research seminar which brings together experts from science studies and philosophy of science. It is organized by TINT, the Centre for Philosophy of Social Science at the University of Helsinki.

There are several theses in political science that are usually explicitly called ‘laws’. Other theses are generally thought of as laws, but usually without being explicitly labelled as such. There are still other claims that are well-supported and arguably interesting, while no one will be tempted to call them laws. This situation warrants some philosophical reflection. In this paper we develop a strategy for thinking about lawhood in political science, starting from the work of Sandra Mitchell. The proposed strategy is a set of guidelines that political scientists can use to reflect on and argue about specific cases, not a clear-cut demarcation criterion. We defend and motivate this strategy and apply it to two cases (one with respect to state repression, one about parliamentary elections). Finally, we compare our proposal with the reflections on laws in the social sciences of Harold Kincaid and Mark Risjord.