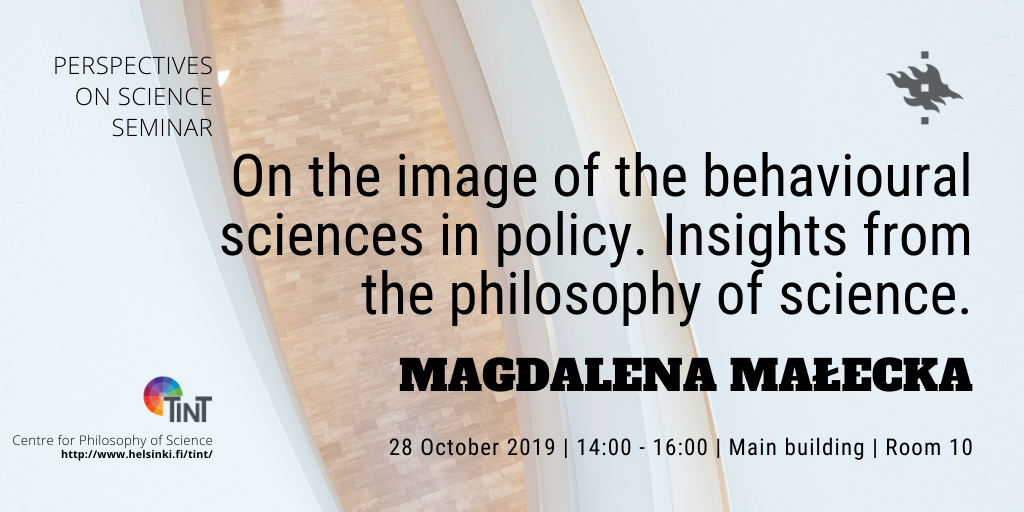 At the next weeks Perspectives on Science -seminar (28.10.) Magdalena Małecka (University of Helsinki & TINT) will present her paper “On the image of the behavioural sciences in policy. Insights from the philosophy of science.“

Magdalena Małecka is a Marie Skłodowska- Curie Global Fellow (Stanford, Helsinki). Now she works at the University of Helsinki, TINT – Centre for Philosophy of Social Science. She works at the intersection of modern and contemporary philosophy, philosophy of science, legal theory, and the social and behavioural sciences.

Recently, we are facing an increasing interest in applying findings of the behavioural sciences to policymaking. This phenomenon has been sometimes called ‘the behavioural turn’ in policy. Its proponents claim that the behavioural sciences provide us with knowledge that could and should be used to design public policies. Until now more than a hundred policy units which rely on insights from behavioural research have been created across the globe, at all levels of government. These institutions mostly promote ‘nudging’ – a new tool of public policymaking that influences people’s behaviour by changing contexts in which people act (so-called ‘choice architecture’).
Most general philosophical treatments of behavioural policy can be found within moral and political philosophy, as well as in philosophy of science. The work proposed by philosophers of science has mainly contributed to discussions on causation, evidence, modelling policy targets and randomised controlled trials, all of which have focused on epistemological and methodological questions about the reliability of scientific evidence and on asking under which conditions we can predict that a policy informed by behavioural research will work, that is will achieve a goal which a policymaker sets for herself. Thus, philosophers of science discuss philosophical problems related to studying impact of policies on behaviour.
I intend to initiate a new discussion on the ways in which behavioural research is utilized in policy. I suggest how insights from philosophy of science can advance not only an analysis of how policies influence behaviour, but also of how behavioural science “informs” policymaking. I start my analysis from reconstructing how behavioural research is understood in behavioural policy and debates accompanying it. I call the result of such a reconstruction an image of the behavioural sciences. In the next step I confront this image with research which is referred to in order to advocate, design and justify behavioural policy. Hence, I have a close look at prospect theory and heuristics-and-biases programme and experimental works inspired by these theoretical findings. I compare what is claimed to be known on the basis of this subset of behavioural science with the knowledge that this research provides. Finally, I draw philosophical conclusions from this comparison.