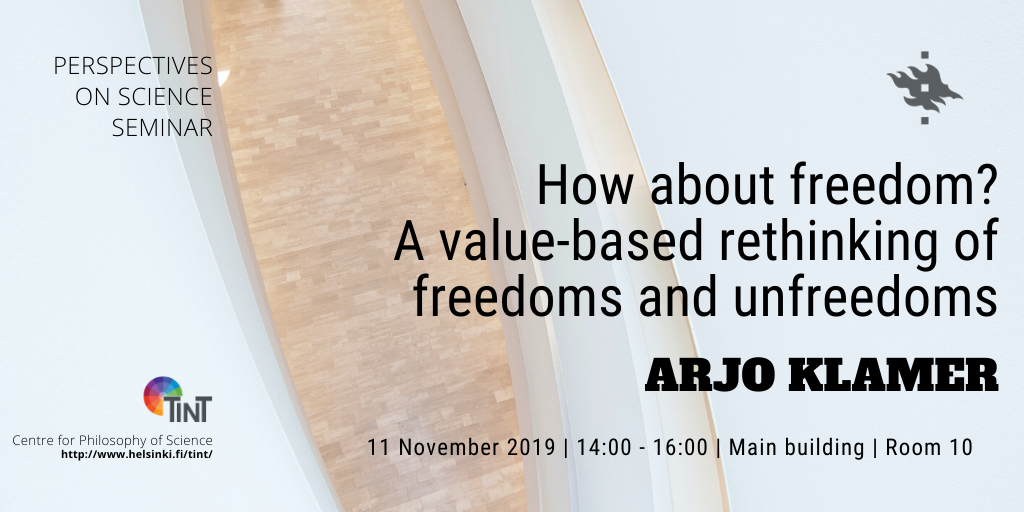 At the next weeks Perspectives on Science -seminar (11.11.) Arjo Klamer (Erasmus University) will give a presentation entitled “How about freedom? A value-based rethinking of freedoms and unfreedoms”.

Freedom is an important concept in the conversation of economists. As it is in the conversations among people all over the world. For some economists it is even the highest value, the ultimate end of economic life. For many other people it is, too, although they may have another idea of what freedom means to them.

But what does freedom mean? It is a value, but can it be a purpose in life? I do not experience that myself. That could be because of the privileges of a white, well-educated male living in the so-called free world. Yet as I am in the company of people who tout freedom, or liberty, or personal autonomy, or something else in the same vein, as most important to them, I feel the need to sort out what people really mean when they speak of freedom. What do Martin Luther King, von Mises, Hayek, Friedman, McCloskey, Sen, Mill, Rousseau, freedom fighters, Silicon Valley executives, and quite a few of my students have in common when they see freedom as their ultimate purpose? And: am I missing something?

There is another reason to explore freedom and that is the fact that liberal democracies, which I have taken more or less for granted during my life, are in the defensive all over the globe. Liberal democracies are the realization of what John Locke, Immanuel Kant, John Stuart Mill and other philosophers saw as the ideal of a free society. In such a society people have the freedom to express themselves, to trade, to worship, and elect those who represent their interests in the governing bodies without unnecessary restrictions or coercion. But now we witness movements in virtually all countries, dominant in some, keen to give up some of these freedoms for something else, nationalism in particular, and a “strong leader.” Such movements appear to express the desire to “escape from freedom”, as Erich Fromm phrased it in 1941 (Fromm, 1941). Are such movements merely populist, and therefore irrational, ignorant, and therefore dangerous, as liberal democrats tend to perceive them? Or is something else going on? Are the liberals missing something?