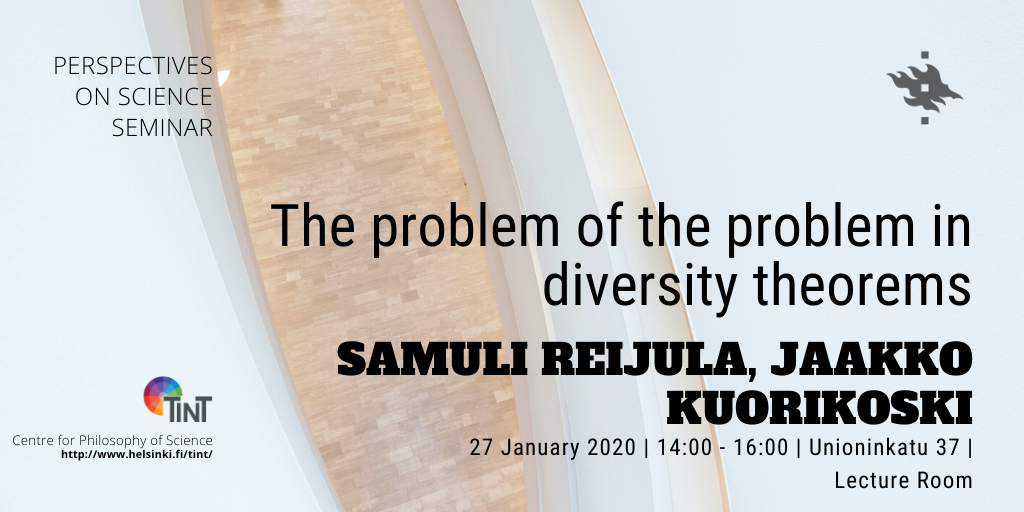 At the next Perspectives on Science seminar on 27.1., Samuli Reijula (TINT & University of Helsinki) and Jaakko Kuorikoski (TINT & Tampere University) will give a talk entitled “The problem of the problem in diversity theorems”.

The seminar will take place on Unioninkatu 37, in the lecture room, from 2 to 4 pm.

Modern science is a deeply collaborative enterprise, as tackling most of the genuinely important intellectual challenges lies beyond the reach of a single scientific discipline, not to mention individual researchers. Science needs diversity — solving scientific research problems requires recruiting specialized expertise and resources from a variety of diverse perspectives. An important question therefore is whether the diversity of a group is in itself epistemically valuable, over and above the epistemic abilities of the group members.

According to the diversity theorem (Page 2008), groups of diverse problem solvers can outperform groups of high-ability problem solvers. This is because high-ability problem-solving groups tend to be less diverse. They tend to rely on similar methods of problem solving, and can therefore get stuck in local maxima. The effects of this general mechanism have been examined through mathematical modelling (proof) and a set of agent-based simulations (Hong & Page 2004). We ask whether, or to what extent, these methods provide trustworthy evidence for the diversity theorem. Our main argument is that the current models cannot shed light on the trade-off between diversity and ability, because the problems faced by the agents in the models are much too difficult for expertise to be of any use. Both expert agents as well as randomly chosen ones face a task consisting of random noise, and the higher redundancy of problem-solving tactics in expert groups slightly hinders their performance, this giving rise to the simulation outcomes used to argue for the diversity theorem. Solving interesting problems in the real world amounts to more than such guesswork, however, and this casts doubt on the applicability of the celebrated results by Hong & Page, as well as their philosopher commentators (e.g., Grim et al. 2019).

We present a new version of the model in which the problem to be solved by problem-solving groups is modelled in such a way that the model can capture “ability” or expertise in a meaningful way, and use the model to explore the substantial trade-offs between diversity and ability. We end with a reflection on methodological problems in using agent-based simulations in the social sciences and philosophy.