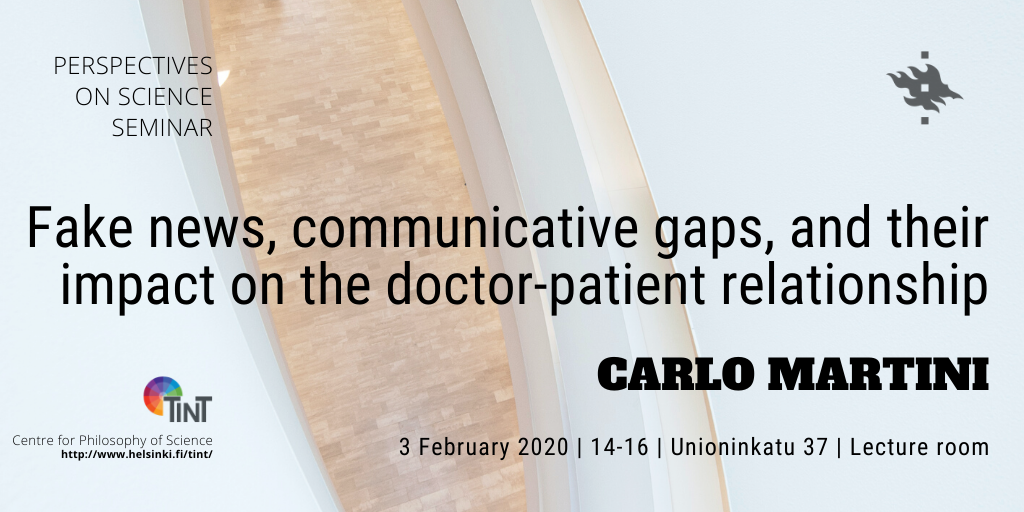 At the next Perspectives on Science seminar on 3.2., Carlo Martini (TINT & Vita-Salute San Raffaele University) will give a talk entitled “Fake news, communicative gaps, and their impact on the doctor-patient relationship”.

The seminar will take place on Unioninkatu 37, in the lecture room, from 2 to 4 pm.

The first goal of this paper is to elucidate the distinction between ‘pseudo’ and ‘genuine’ scientific controversies, and to provide a qualitative methodology, based on the literature on expertise, for distinguishing between the two. We illustrate six epistemic criteria for distinguishing pseudo from genuine scientific debates in science and in medicine in particular. Controversies are quite common in medicine: often new data demonstrate that a commonly-accepted medical practice is not beneficial or even harmful to patients.

We will then apply the above criteria to a case study: the controversy over statins, which are widely-prescribed drugs used to decrease the level of cholesterol in order to reduce the risk of cardiovascular diseases (CVD). However, many are skeptical about their actual efficacy and about their safety; claiming, for instance that behavioural (e.g. diet) rather than drug-based interventions are  more effective to prevent CVD. We will investigate whether the case of statins can be regarded as a genuine scientific controversy or not.