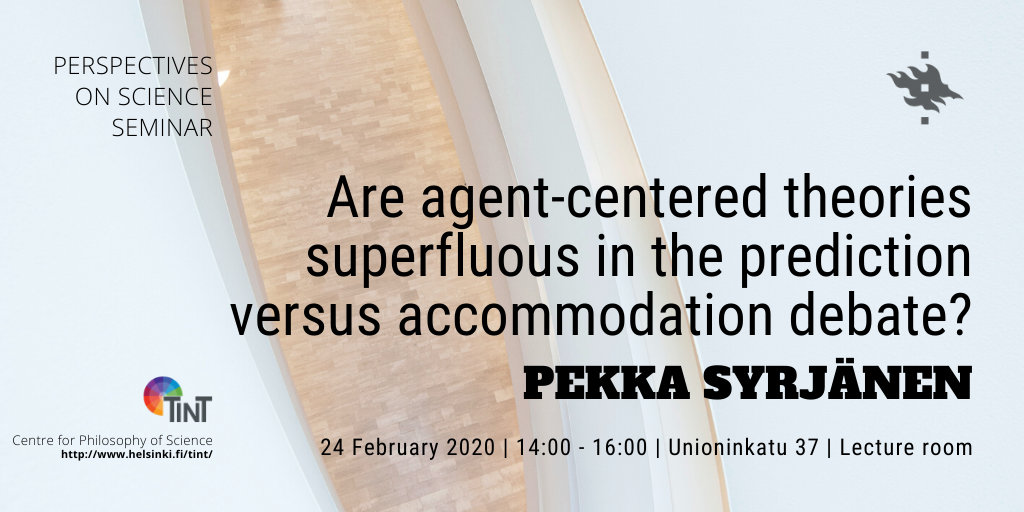 At the next Perspectives on Science seminar on Monday 24.2. Pekka Syrjänen will present his paper “Are agent-centered theories superfluous in the prediction versus accommodation debate?” The seminar will take place in the lecture room in Unioninkatu 37, from 2 to 4 pm.

Pekka Syrjänen is a doctoral student in theoretical philosophy at the University of Helsinki. His research focuses on the epistemic justification of beliefs, and he is writing a dissertation on the epistemic value of prediction in science. He is interested in epistemology, philosophy of science and the social sciences.

A perennial debate in the philosophy of science concerns the relative epistemic value of predicted versus accommodated evidence. Should we have more confidence in a scientific theory if it predicted rather than accommodated some piece of evidence? Predictivists think so, but they have had a hard time of producing a convincing argument for why this should be so. Currently, most defenses of predictivism fall under the banner of “weak predictivism”. Weak predictivist theories argue that prediction doesn’t have any inherent epistemic advantage over accommodation, but that sometimes it does have more value indirectly because it correlates more strongly with some other feature that is epistemically relevant. In cases where this other feature cannot be directly evaluated, the epistemic asymmetry between prediction and accommodation emerges.

Weak predictivist theories include so-called agent-centered theories. These theories, such as those presented in White (2003) and Barnes (2008), argue that prediction is more valuable than accommodation because it tells us something about the reliability of the agent making the predictions. The evidence about the agent then rebounds to provide support to the theory he or she is advancing. I argue in this paper that the agent-based approach is wrong. The information we gain about the theorist based on prediction is redundant to evaluating the theory. The agent-centered approach doesn’t resolve or contribute to the resolution of the prediction versus accommodation issue.

All are warmly welcome!