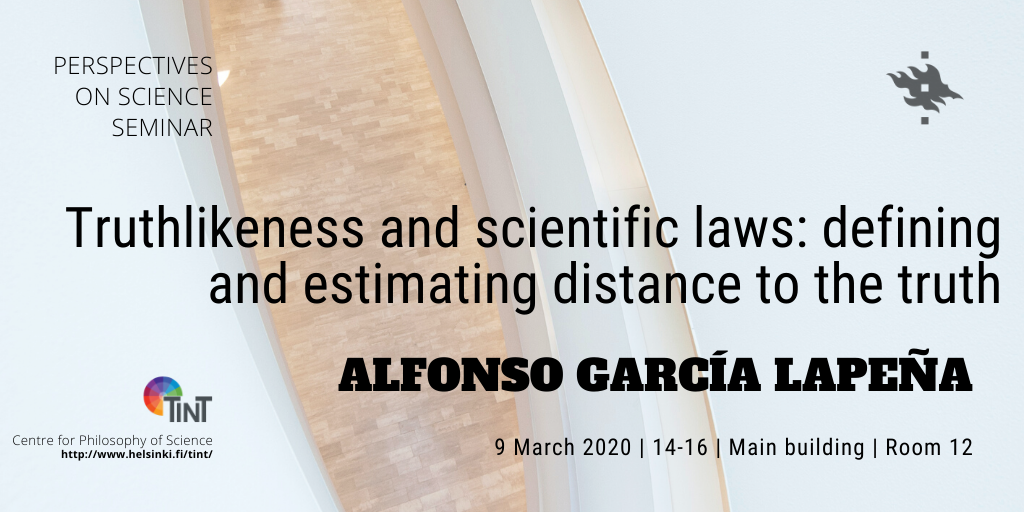 At the next Perspectives on Science seminar on Monday 9.3. Alfonso García Lapeña (University of Barcelona) will give a presentation with the title “Truthlikeness and Scientific laws: defining and estimating distance to the truth”. The seminar will take place in the Main building (Fabianinkatu 33) in room 12, from 2 to 4 pm.

Alfonso García Lapeña graduated in Philosophy at University of Barcelona (UB), in BBA at ESADE and has completed the first cycle of Physics at UB. At present he is a member of LOGOS and BIAP research groups, were he is doing a PhD in truthlikeness and scientific laws. He also teaches introduction to logic at UB and philosophy of science at Casa Elizalde. Besides truthlikeness, scientific realism and other topics in philosophy of science, he is interested in philosophy of video games. He recently published a co-authored essay about the nature of video games.

Truthlikeness is a property of a theory or a proposition that represents its closeness to the truth. Quantitative deterministic laws (QDL) typically have a real function representation in some state-space. According to Niiniluoto, truthlikeness for QDL can be defined by the Minkowski metric. We will present some counterexamples to the definition and argue that it fails because it considers truthlikeness for QDL to be just a function of accuracy, but an accurate law can be wrong about the actual “causal structure” of the world. We will expose a modification of Niiniluoto’s that defines truthlikeness for QDL according to two parameters: accuracy and nomicity. The first parameter is correctly measured by the Minkowski metric. The second parameter can be measured by the difference of the derivatives. We will show how the definition can be used to rationally estimate truthlikeness for QDL given some evidence. Finally, we will apply our proposal to a real case study regarding the thermodynamics of gases, estimating the degrees of truthlikeness of nine historical gas laws for nitrogen.

All are warmly welcome!