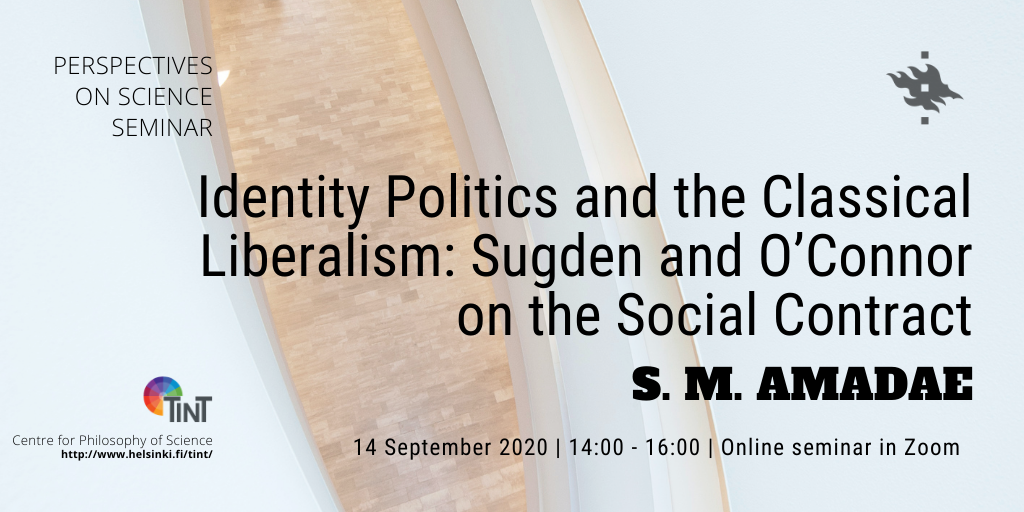 At the Perspectives on Science seminar on Monday 14.9. S. M. Amadae (University of Helsinki) will present her paper titled “Identity Politics and the Classical Liberalism: Sugden and O’Connor on the Social Contract”.  The seminar will be organized as an online meeting in Zoom from 2-4 pm.  Zoom is an online conference tool supported by University of Helsinki.

To join the seminar please contact tatu.nuotio(a)helsinki.fi or kaisla.kareoja(a)helsinki.fi. Information about using Zoom can be found here.

S. M. Amadae is currently a university lecturer in politics at the University of Helsinki, and was awarded a 2019-20 Berggruen Fellow at the Center for Advanced Study in the Behavioral Sciences, Stanford University.  Her publications include Prisoners of Reason:  Game Theory and Neoliberal Political Economy (Cambridge University Press, 2016) and the award winning Rationalizing Capitalist Democracy:  Cold War Origins of Rational Choice Liberalism (University of Chicago Press, 2003).  Amadae recently contributed to The Impact of Artificial Intelligence on Strategic Stability and Nuclear Risk  (SIPRI, 2019) from the perspective of reducing existential risk of accidental or inadvertent nuclear war. Amadae is currently and  working on the book project “Neoliberal Seeds of Illberalism:  Nordic Alternatives.”  This research seeks to understand the recent global transition to illiberal hybrid autocratic forms of government and to identify practical interventions consistent with values of participatory governance, a free press, and inclusive economic prosperity. It draws on current research in Finland and the Nordic countries to put forward a non-utopian alternative based on existing practices of democratic governance, free trade, and the welfare state model.

Robert Sugden’s The Community of Advantage: A Behavioural Economist’s Defence of the Market (2019) defends the classical liberal blueprint for political economy.  His defense rejects the orthodox strategic rationality of game theory in favor of accepting that individuals’ preference​s are context dependent and evolve over time.  Departures from the rational-expectations orthodoxy include focusing on opportunity sets versus preference functions, and accepting team reasoning and intrinsic motivation.  Yet this welcome defense of classical liberalism overlooks the Achilles Heel of the system of natural liberty, capitalist democracy, and the open society: systemic discrimination and structural oppression.  Cailin O’Connor’s The Origins of Unfairness: Social Categories and Cultural Evolution(2020) works within the same broadly construed theoretic tradition as Sugden which encompasses rational actor assumptions, replicator dynamics and agent-based models.  Her theoretical partners in dialogue are Ken Binmore and Brian Skyrms.  Where defenders of classical liberalism address equals at a bargaining table representing the rule of law governing property rights, O’Connor focuses on a less well-known set of models demonstrating the impact of introducing arbitrary binary markers into an otherwise homogeneous population.  Using both the Hawk-Dove game and Nash demand game, O’Connor provides an account of how-possibly systematic gendered hierarchy and ethnic patterns of advantage evolve and are sustained.  O’Connor’s comprehensive analysis of these hierarchies raises two significant questions for Sugden and other advocates of the classical liberal contractarianism.  First, given the demonstrable patterns of systemic discrimination along the lines of gender and ethnicity, why aren’t models providing an analysis of the mechanism underlying these patterns not central?  Second, how can Sugden, and others yearning for the impartial rule of law and individual self-determination, accommodate the implications of O’Connor’s work to arrive at a more inclusive and accurately impartial social contract?  In conclusion I discuss my Hawk-Dove Binary model with respect to reflecting critically on whether O’Connor’s how-possibly mechanism may be augmented.