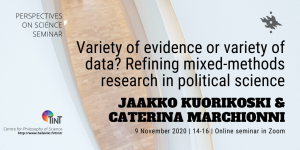 At the PoS seminar session on next Monday 9.11., Jaakko Kuorikoski (UH) and Caterina Marchionni (UH) will give a presentation titled “Variety of evidence or variety of data? Refining mixed-methods research in political science”. The seminar takes place in Zoom from 2 to 4 pm.

To join the seminar, please contact tatu.nuotio(a)helsinki.fi in order to get the Zoom link.

Jaakko Kuorikoski is an associate professor of Practical Philosophy at the University of Helsinki. His main areas of specialization are philosophy of economics and philosophy of the social sciences and he has published widely on scientific explanation, modeling, simulation and causality.

Caterina Marchionni is a University Lecturer in Practical Philosophy at the University of Helsinki. Her research interests are in philosophy of economics and philosophy of the social sciences, in particular on explanation, models, evidence and interdisciplinarity.

This paper is the latest installment of their joint research on evidential variety.

Mixed-methods research – the combination of qualitative and quantitative evidence within the same research design – is gaining increasing prominence in political science and in other social sciences too. The idea is that bringing together a variety of evidence strengthens causal inference. In spite of its obvious appeal and several frameworks providing concrete guidelines (nested analysis, set-theoretic multi-method research, Bayesian approaches), questions about the feasibility and desirability of mixing methods remain very much open. Part of the reason, we submit, is that arguments for and against mixed methods often trade on equating differences in methods and data with differences in kinds of evidence, which are thought to translate into differences in kinds of causal claims (e.g., dataset observations <-> variational evidence <-> average causal effect). Yet, not only is this a category mistake but, more importantly, it limits our understanding of the ways in which evidence from one study can strengthen causal inference in another. To address this issue, we distinguish kinds of data and kinds of evidence; employ a difference-making account of causality to show that different kinds of evidence need not correspond to different kinds of causal claims; and pull apart distinct epistemic rationales for using a variety of evidence in mixed-methods research. Doing so allows us to clarify the conditions under which mixing methods is feasible and epistemically desirable.