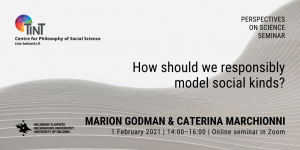 At the next Perspectives on Science seminar on Monday 1.2., Marion Godman (Aarhus University) & Caterina Marchionni (University of Helsinki) will give a presentation titled “How should we responsibly model social kinds?”. The seminar takes place in Zoom from 2 to 4 pm.

Marion Godman is an Assistant Professor in the Department of Political Science at Aarhus University, Denmark. She is currently a recipient of a Sapere Aude research leader grant examining what a theory of human kinds (or groups) can tell us about the basis for group rights. Her first book, The Epistemology and Morality of Human Kinds (Routledge, Focus in Philosophy series) is just out this year (2021). You can find more information about her here.

Caterina Marchionni is currently University Lecturer in Practical Philosophy at the University of Helsinki and member of TINT – Centre for Philosophy of Social Science. Caterina has worked on scientific explanation, models, evidence and interdisciplinarity, with a particular focus on economics and the social sciences. More information on Caterina’s work can be found here.

We distinguish two ways of approaching the responsible modeling of social kinds (such as gender and race): representational modeling, whose core value is the pursuit of accurate representation, versus emancipatory modeling, whose core value is the pursuit of emancipatory objectives. Some have criticised emancipatory modeling for having unintended and undesirable effects. We show that the same holds true for representational modeling when it concerns interactive kinds – that is kinds whose members and their behaviors change in response to being studied. For the case of gender we show that such effects are possibly significant and most importantly quite hard to predict. We then consider the implications of interactive kinds for the responsibilities of scientists more generally. The paper is part of a joint project on Reactivity in the Human Sciences.