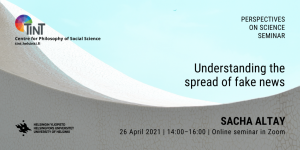 At the next Perspectives on Science seminar on Monday 26.4., Sacha Altay (École Normale Supérieure in Paris) will give a presentation titled “Understanding the spread of fake news”. The seminar takes place in Zoom from 2 to 4 pm.

To receive the Zoom invitation, please sign up here.

In spite of the attractiveness of fake news stories, most people are reluctant to share them. Why? In four pre-registered experiments we found that sharing fake news hurt one’s reputation in a way that is difficult to fix, even for politically congruent fake news. However, some fake news stories did reach a wide cultural success. Does it mean that people don’t care about accuracy and were fooled? Not necessarily. In another paper we identified a factor that, alongside accuracy, drives the sharing of true and fake news: the ‘interestingness-if-true’ of a piece of news. In three pre-registered experiments (N = 904) participants were presented with a series of true and fake news and asked to rate the accuracy of the news how interesting the news would be if it were true and how likely they would be to share it. Participants were more willing to share news they found more interesting-if-true as well as news they deemed more accurate. In the end we argue that people may not share news of questionable accuracy by mistake but instead because the news has qualities that compensate for its potential inaccuracy such as being interesting-if-true.

Sacha Altay is completing a PhD in experimental psychology at the École Normale Supérieure in Paris. Fascinated by (apparently) irrational beliefs, he tries to understand why despite people’s cognitive abilities to resist misinformation, some false beliefs are so widespread. During his PhD Sacha also tested novel communication techniques to correct people’s misperceptions and fight misinformation. He will soon start a postdoctoral position on misinformation and (mis)trust at the Reuters Institute for the Study of Journalism.