Really happy to see the appearance of this article, in an exciting collection on contemporary spatiality in Nordic literature: 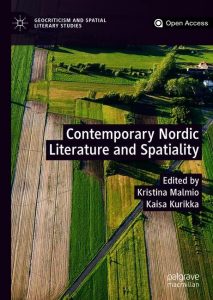 The collection should be available open-acess soon.

I’ve always had an interest in how the work of Mikko Rimminen approaches, evokes, and distorts the spatial coordinates of Helsinki. Pussikaljaromaani (“The six-pack novel”) has a particular place for me, also because it was the first longer prose text I ever translated (published as Drinkebroersroman with Arbeiderspers in 2007), and several of the strange sayings and events of the book has stuck with me ever since. Work on this article provided a great opportunity to return to this Helsinki classic, and to two other works by Rimminen – and also a way to revisit Deleuze’s reading of the fold.

Thanks to Kristina Malmio and Kaisa Kurikka for the excellent work on this collection.

Key takeaways from my article: 1. Mikko Rimminen’s early prose texts can be read in terms of escalating ontological instability, moving toward, and beyond, urban apocalypse; 2. the instability between competing worlds can most productively be described by way of Deleuze’s concept of the fold, which posits a continuing plane of meaning between storyworlds, rather than by drawing on binary oppositions.

From the introduction to : “A Geo-Ontological Thump”:

“In the Finnish author Mikko Rimminen’s novel Pölkky (2007; “Woodblock”), set in present-day Helsinki, one of the most disturbing occurrences is the appearance of a gradually widening hole in the skating rink in Kaisaniemi Park. The skating rink is under the supervision of the protagonist of the novel, and the threat posed by the hole is not only directed at the skaters, or at the hypothetical sense of achievement of the protagonist. As is suggested throughout the novel, the expanding hole and the steam rising from it are potentially of much more far-reaching consequences, intimating the possibility that not only the skating rink, but perhaps fictional Helsinki itself is being subjected to a slow but world-threatening upheaval. This event which threatens the storyworld’s spatial environment in Rimminen’s second novel echoes similar events in a range of postmodern literary texts. One parallel is the giant tiger roaming New York’s underground in Jonathan Lethem’s Chronic City (2009), which causes the sudden appearance of gaping holes in the city—a reference which is of particular interest for its disturbance in the referential relationship with an identifiable urban environment. Like the hole in Pölkky, it presents an unreal and ultimately inexplicable occurrence that contrasts the narrated space and the referential world, but that also threatens the stability of the storyworld itself. Such disturbing events in late modern literature will be examined in this chapter as instances of ontological instability, and approached in terms of folds in narrated space. I will focus on Mikko Rimminen’s early prose texts. One of the aims of this chapter is to propose a new reading of his early prose from the perspective of the texts’ apocalyptic undercurrents, which have remained largely unappreciated, and to take into account a little-studied extract from an unfinished novel by Rimminen.

The focus in this chapter is on how the relationship between the fictional city and its referential counterpart is both foregrounded and undermined in a way that destabilizes the ontological status of the storyworlds in question. The texts under discussion here display intimations of apocalypse, inviting the reader to consider whether the ontological instability is located in the perception of the focalizer or narrator, in literary space, or both. The key concepts that will be explored in the analysis of the literary space and storyworld are Brian McHale’s flickering effect (1987) and Bertrand Westphal’s heterotopic interference (Westphal 2011, 101). Gilles Deleuze’s fold (1993) will be proposed here as a heuristic concept to describe how ontological instability in postmodern storyworlds is shaped. I argue that one of the advantages of this concept is the way it defies binary opposites, moving instead toward an understanding of spatial environments in postmodern storyworlds as acting on a holistic, if often paradoxical, continuous plane of meaning.”

“In a conversation with the author (27.1.2017), Rimminen agreed that there is some basis for interpreting his first three prose texts as an apocalyptic trilogy (or trilogy moving toward the apocalypse), centered on Helsinki: “If I had published a novel written on the basis of that PROSAK extract, there would have been this structure, in which in Pussikaljaromaani there are hints; in Pölkky, it is already feared, and in the next novel, it would have already happened.” This narrative structure also sheds some light on the thematic understanding of these prose texts. Rimminen pointed out that in the three prose texts there is an important social context: Pussikaljaromaani posits the importance of a community, while Pölkky deals in part with human loneliness; in the last (unfinished) novel, with only one man left, it would not even have been possible to be lonely in company. The development in Rimminen’s early prose texts can be seen from the perspective of the author’s interest in the precariousness of community in late capitalist society, or in terms of his preoccupation with labor in its many forms (see Mäkelä 2015; Ojajärvi 2013). What I have tried to suggest here is that the development in Rimminen’s first three prose texts can also be read in terms of gradually escalating ontological tensions, which are also integral to the author’s experiments with language and the role of the narrator. The spatial environments, although upon first encounter firmly referential to actual Helsinki, are presented as subject to incomprehensible forces that are hinted at, first, as a possibility in the linguistic realm—by taking metaphor literally—but that gradually appear as actual interferences in the ontological storyworld. In the course of the three texts, the spatial environment and its referential mode move, in the terms proposed by Westphal, from homotopic consensus—a close relationship to actual Helsinki—to a threatening sense of heterotopic interference, in the form of the hole in the ice rink, and eventually, in the “Extract,” to a full-blown utopian excursus: a world in which the threatening intimations from the two novels seem to have become realized in a process of gradual unfolding.”

“The treatment of the urban spatial environment in Mikko Rimminen’s early prose texts raises a number of issues that are of relevance for our understanding of space in postmodern literature in more general terms. An examination of Rimminen’s prose texts confirms the notion, proposed by Brian McHale, that postmodern literature displays a conspicuous ontological instability: what at first appears to be a recognizable storyworld in the texts, with a firm referential relationship to actual Helsinki, turns out to be increasingly undermined by intimations of ontological disturbances. The distinction made by Bertrand Westphal between three types of “coupling”—“homotopic consensus,” “heterotopic interference,” and “utopian excursus”—is a helpful typology with which to examine the various kinds of referential relationships displayed by these texts. These relationships defy an understanding as being either true or not true—both in the internal coherence of the storyworld and in their relationship to the actual world—but can be approached more productively through the concept of the fold, as proposed by Deleuze: a concept that challenges binary oppositions, and that emphasizes the simultaneous presence of possibly contradictory worlds evolving on the same plane of meaning. Crucially, such an understanding of literary space and its referential relationship to the actual world that refuses to make a dramatic distinction between actualized (or the real) and potential (or the imaginary) also draws attention to how the ontological instability of postmodern literature may in turn feed into readers’ perspectives of their actual world, and may urge us to consider it in questions of real and unreal, possible and actual.”