After years in the making, this book is finally out in the world: The Routledge Companion to Literary Urban Studies. Its aims are to provide the reader with a methodical overview of the fundamentals of literary urban studies, and with a detailed outline of new directions in the study of the literary city.

It’s been a privilege to work on this with so many committed and wonderful colleagues. This is a book that showcases the richness and vitality of literary urban studies, with chapters on subjects ranging from urban satire in ancient Rome (by Grace Gillies), to the metropolitan miniature (by Andreas Huyssen), Athens in post-crisis literature (Riikka P. Pulkkinen), Hong Kong’s public housing in the graphic novel (Elizabeth Ho), translocality in city literature (Lena Mattheis), and much more. 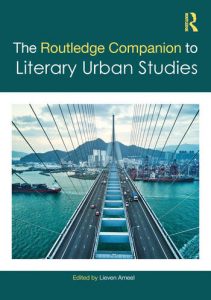 From the Introduction: “What does it mean […] for a literary text to take the city as its focal point, as the presence from which character, language, plot, and voice take part of their meaning? How does the citiness of city literature make that literature – and literary urban studies – different from other texts and scholarly approaches? To what extent does the raw material constituted by the urban realm demand other kinds of approaches, as opposed to other kinds of literary texts? In each of the chapters of this Companion, these questions are present at least as part of a general background that informs the analysis.” (p. 2)

The Routledge Companion to Literary Urban studies consists of 33 newly commissioned chapters that provide an outline of contemporary literary urban studies. The Companion covers all of the main theoretical approaches as well as key literary genres, with case studies covering a range of different geographical, cultural, and historical settings. The final chapters provide a window into new debates in the field. The three focal issues are key concepts and genres of literary urban studies; a reassessment and critique of classical urban studies theories and the canon of literary capitals; and methods for the analysis of cities in literature.

The Routledge Companion to Literary Urban Studies provides the reader with practical insights into the methods and approaches that can be applied to the city in literature and serves as an important reference work for upper-level students and researchers working on city literature.

“I am grateful to all of the contributors to this volume for taking up the challenge to contribute a chapter within a tight time frame and under difficult circumstances. I am particularly indebted to all contributors whom I did not know prior to the work on this Companion and who reacted warmly and collegially to my invitation. […]

I would also like to thank all colleagues with whom I have been in touch in the planning stages of the Companion, and who were not able to contribute for a variety of reasons. Circumstances for academic work have been particularly difficult these past years, with an unrelenting global pandemic (as I write these words) causing a continued state of uncertainty. In several countries – my own home country included – political decisions have made working conditions at universities more difficult during the past decade, especially within the humanities. Colleagues with whom I communicated in the context of this Companion wrote that they were coping with bereavement, were struggling under the simultaneous pressures of online teaching and home schooling, or were so overwhelmed with teaching in precarious positions that they had no possibility to do research or writing. I think it is important to also note, in an acknowledgment section such as this one, the wide-ranging invisible work and the meaningful absences in the background of academic publishing.

A special thanks to Frida, who was born during the final stages of this book project, and who always brought a sense of perspective and a smile to working from home. This book is dedicated to her.” (xiv-xv)

From the Introduction: “literary urban studies as a field can be said to resemble the city itself: it is a space where people from all kinds of backgrounds and with a range of different aims and perspectives meet and interact. And it is never finished – there are always some structures to be refurbished or adapted, some fallow land to be repurposed, and new kinds of methodologies, approaches, and experiences to be incorporated, always in ways that build on what is already there. In both of these senses, this Companion hopes to resemble its object of study.” (p. 8)

Do get in touch (at lieven.ameel [a] tuni.fi) if you are interested in reviewing the book, if you would like to read a particular chapter or chapters, or if you want to discuss literary urban studies.