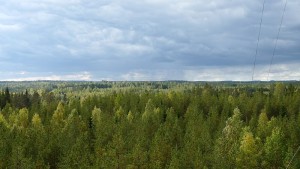 It is commonly known that forests emit volatile organic compounds (VOC) that participate in atmospheric chemistry and, when oxidised in the atmosphere, also form new aerosol particles. Ozone, the hydroxyl radical (OH) and the nitrate radical (NO3) are generally considered to be the dominant oxidants that initiate the removal of trace gases, including pollutants, from the atmosphere. But now a new finding by Lee Mauldin III, Mikko Sipilä, Pauli Paasonen, Tuukka Petäjä, Theo Kurtén, Veli-Matti Kerminen, Markku Kulmala and their collaborators suggests that forests also participate in the production of atmospherically relevant oxidants. In a recent Nature article, the group presented atmospheric observations from Hyytiälä supported by laboratory experiments and theoretical considerations that identified another compound, probably a stabilized Criegee intermediate (a carbonyl oxide with two freeradical sites) or its derivative, which has a significant capacity to oxidize sulphur dioxide and potentially other trace gases. This compound probably enhances the reactivity of the atmosphere, particularly with regard to the production of sulphuric acid, and consequently atmospheric aerosol formation. The oxidation chemistry of this compound seems to be tightly linked to the presence of alkenes of biogenic origin. Michael Boy and his group tested this idea for Hyytiälä and Hohenpeissenberg in Boy et al (2012). Photo of Hyytiälä by Juho Aalto.