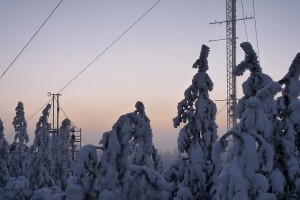 Governments are failing to act on climate change, and greenhouse gas emissions are increasing with accelerated speed. Joonas Merikanto is studying another route to mitigate climate change, climate engineering, of which there are two main types: some methods remove carbon dioxide from the atmosphere (carbon dioxide removal), whereas others reflect sunlight back to space (radiation management).

Carbon dioxide removal methods are slow and cumbersome. Planting new forests is an option but there really isn’t enough land and, since forest is usually darker than open land, the consequences on albedo could be adverse. Fertilising certain seaweeds is another option but it would have unpredictable consequences to marine ecosystems. Engineered carbon capture would also be possible, but appears to be extremely costly compared to emissions cuts, and involves storage problems.

The reflectivity of the atmosphere could be increased by  spraying aerosol particles in the sky, where they would become seeds for new clouds or directly reflect solar radiation. Aerosols could quickly cool the planet with relative little costs. According to Joonas, this method, too, entails severe risks and unknowns. Making clouds whiter could mix up rain patterns, and particles injected in the stratosphere could turn the sky from blue to grey and possibly increase ozone layer destruction. Termination of aerosol cooling in a world with increased carbon dioxide concentrations would be problematic, as it would quickly heat the planet to temperatures above the starting point. Therefore, aerosols offer no long-term solution to climate change.

At the moment, nobody really engineers climate although some countries like China have large scale rain enhancement projects. International legislation should be developed quickly, so that individual countries wouldn’t cool the climate without consideration of consequences outside their borders. “Climate engineering is not a magical remedy. It can only be a short-term solution that would buy us time to prevent environmental crises. No matter how much we engineer the climate artificially, we still need to cut down our emissions”, Joonas says. “However, a cooler Earth that suffers from side effects of climate engineering could still be a better place to live than a severely heated planet”, he concludes.

Photo of Hyytiälä by Juho Aalto.