The recent backlashes against globalization and the liberal order in the Western world have spurred a variety of analyses on the root causes of this development. This is particularly the case in Europe where populist, nationalist, and xenophobic movements are questioning many of the central doctrines of post-WWII integration. New forms of authoritarianism are rising and challenging European values such as rule of law, freedom and open civil society. According to many, liberalism and democracy are in crisis and the resilience of traditional institutions has been put into test.

The research project Between Law and Politics takes a critical look at this development. It investigates into the founding ideas of post-WWII liberalism with the aim of analyzing and redefining some of the key ideas of this movement. In particular, the project analyzes the transforming relation of economy, politics and law in the contemporary economic constitution of the European Union. See Work Packages.

Our basic hypothesis is that the ongoing crisis of the European project reflects a profound ambiguity that concerns the very idea of liberalism and its relation to democracy.  We argue that the so-called economic constitution of the EU reflects a long line of ordoliberal or neoliberal thinking that has sought to undermine the role of democratic politics. The euro crisis from 2009 onwards has only strengthened the influence of ordoliberal thinking, challenging traditional ideas of national sovereignty, democratic accountability, and the division between executive and legislative powers.

The project brings together merited young scholars working in the fields of philosophy, political science, and media studies. The aim is to adopt a multidisciplinary approach which (i) analyzes the meaning and relation of central concepts and ideas and (ii) investigates their influence in concrete policies and institutions. 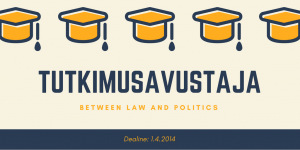 The project is hosted by the Network for European Studies and funded by the University of Helsinki.