Let me take you on a tour backstage of the complex and dynamic machinery we call the brain. In neuroscience we tend to focus the light on neurons, but what is a neuron without friends? The brain composes of only 10% neurons and the rest is glia, in terms of volume. An exceeding amount of interest is being turned towards glia, since looking at neuronal synapses and recording minis cannot solely explain neuronal functions. As the system gets more complicated we need to take more (f)actors into account.

Indeed, the elements of an excitatory synapse is in addition to the pre- and post synaptic terminals also one part astrocyte wrapping and one part visiting microglia process. This marriage of four was coined the “Quad-Partite” synapse by Dorothy P. Schafer and friends in their review in Glia 2013. We now know that astrocytes not only remove and recycle neurotransmitters but also actively modulate the function of synapses. In June this year at the Cold Spring Harbor Asia glia meeting, Pierre J Magistretti  gave a very interesting talk on this topic. Astrocytes nurse and protect neurons by maintaining the blood-brain barrier and providing neurons with glucose and lactate, a fuel kept at a steady state level in the parenchyma and produced from glycogen under eg. acetylcholine stimulation. Lactate has recently been shown to stretch further than just being fuel, it evokes signalling in neurons that modulates NMDA receptors and turns on plasticity genes. Talking about brain metabolism, Magistretti also pointed out that fMRI measures the activity of astrocytes and not directly neurons. Astrocytes buffer the environment that surrounds neurons. This is of pivotal importance for neuronal membrane potential to function normally, but the buffering has also further implications. Neuronal release of potassium is a sign of activity that doesn’t pass astrocytes unnoticed. Astrocytes maintain homeostasis and osmotic pressure, but potassium functions as a signal to astrocytes that energy expenditure is increased in hungry neurons. In Magistrettis lab, Suzuki et al have previously shown that lactate is required for LTP and long-term memory consolidation. 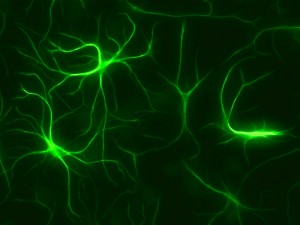 As oppose to astrocytes, originating from the same stem cells as neurons, microglia colonize the mouse brain from the periphery. This colonization starts already at embryonic day 9,5, around the time when neuron precursors begin to differentiate and the whole architecture of the brain takes shape. It has been general knowledge for decades that during development a huge excess of synapses are formed and later removed. The mechanism however, remained a mystery until focus turned from neurons to the neighbouring cells. Previously considered quite boring and dormant, microglia were seen in new, two-photon, light. The view of these little cells in the intact brain was game changing. In 2005, Davalos et al. and Nimmerjahn et al. saw that instead of being dormant, microglia are actively scanning the unchallenged brain; processes browsing through synapses at impressive speed. This evoked the obvious question; they must be doing something important, since this flamenco would be very energy expensive. In the lab of Beth Stevens, a few brave and elegant studies showed synaptic elements in the bellies of microglia. Since microglia are phagocytic cells, they could have a unique position to harness this machinery for targeted eating of weak synapses.

This was the inception of intense research, rapidly laying down the pieces of how microglia inspect synapses and by a complement-dependent manner eat excess synapses with a little help from astrocytes throwing in TGF-beta into the equation. Suddenly the door was open to a novel and very exciting field of neuroscience, providing a buffet of big discoveries to be made. Parkhurst et al. continued on this accelerating train and shed light on the other side of the story; microglia also strengthen learning-induced synapses by rewarding them with BDNF.

Oligodendrocytes deserve some credits as well. The brain of a newborn lacks myelin almost completely while up to 50% of the adult brain consists of myelinated fibres. In humans, the amount of myelin peaks at the age of 30 when the forebrain receives its final sheets. “Oligodendrocytes are specialized in producing internodal myelin sheets and they are very good at it”, says the charismatic Charles ffrench-Constant, one of the big oligo-sharks at the European glia meeting in Bilbao earlier this summer. These cells can independently form the sheet to match the thickness of the axon to an impressive degree that also matches the theoretical thickness that would give the most energy- and space-efficient length and thickness. By varying the length of the internodal myelin the velocity of the action potential is strongly regulated. Intermodal number and length has therefore a critical role in regulating neuronal signalling on a network level. This is implicated for instance in coincidence detector systems such as processing of auditory inputs.

As all other glia cells, oligodendrocytes are plastic and dynamically respond to changes in the surroundings. Various factors affecting myelin are regulated by the activity of the neuronal system, demonstrated by myelin loss in mice housed in isolation and an increase in enriched environment housed mice (Liu et al.) Oligodendrocytes are certainly more interesting than what they might seem at a first glance. Hot topics in the field are obviously the regulation of the adaptive myelination and myelin plasticity. At least I’m personally curious to hear more of the story about learning-induced myelination.

By this post, I hope I managed to highlight the importance of considering the brain as a tight collaboration of all the components it consists of. This collaboration spans throughout the hierarchy, from molecular interactions in the synapse and up to circuit level. When president Obama launched the BRAIN initiative, the challenge was grand and the goal was to “improve the lives of […] billions on this planet”. However, maybe we also need to consider a few more players in the brain in order to get a complete understanding of how things really work in both health and disease.

Lastly, I would like to thank my supervisor, Prof. Carl G. Gahmberg for giving me the opportunity to work with the challenging, but very beautiful microglia. 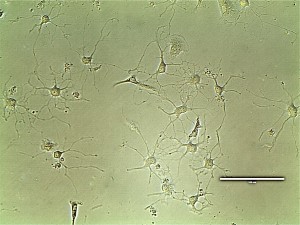