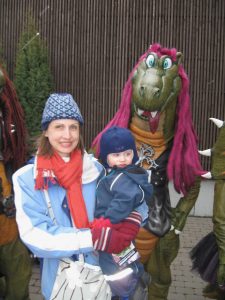 I was born and grew up amidst a large extended family in semi-rural southeastern Pennsylvania. (It was more rural then than it is now!) The largest move I made in my first eighteen years was from one bedroom to the adjacent one, when I switched with my brothers; since then, I’ve lived in at least seven countries on three continents!

I am married with four kids: two boys and two girls. The boys are pictured above with Finnish kids’ metal band Hevisaurus.   My husband John is a visual artist by training and a composer and arranger of music by calling. His personal project is Half-handed Cloud, and he’s also collaborated with many other artists, including, most recently, Henningham Family Press, Jacob Graham and co. with The Creatures of Yes, indie artist John van Deusen, the WNYC podcast The Orbiting Human Circus, and the alternate-history-internet-simulator video game  Hypnospace Outlaw, set in 1999. With seventeen years of classical piano lessons and several years in high school marching band under my belt, I occasionally get to join him and bang on a xylophone or play the melodion.

I enjoy cooking vegan and vegetarian whole-foods based meals, reading and writing, jogging, and all manner of outdoor activities, especially now that we live in Helsinki, where nature is stunningly integrated into the capital city.