The Newspaper group studies how newspapers transformed from the late eighteenth century to the early twentieth century as a channel for marketing goods and services. It further studies the relationship between advertising and journalistic ideals. The datasets used consist of digitised newspapers from the British Library’s Nineteenth Century Newspapers. Studying the relation of advertisements and journalistic ideals in newspapers has two potentially important outcomes. First, it may contribute to a scholarly discussion on the development of print capitalism by using the advertisements as a proxy for larger political and social developments. Second, by better understanding the logic of advertisements in the press, it may help in developing article extraction (at least with regard to advertisements) and thus pave the way any future study that needs to be able to discern between text that emerges from advertisements and from journalistic text. 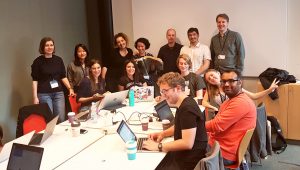 Newspapers and capitalism group for the # DHH19.