Andrey, you just came back from the SASE’s 30th Anniversary Conference at The New School in New York. Could you briefly tell us what it was about?

SASE – Society for the Advancement of Socio-Economics – is a large international organization that brings together researchers exploring the economy and society nexus. Its annual conference is the most important venue for this interdisciplinary research domain. This year, the conference theme was “Fathomless Futures: Algorithmic and Imagined”, which spiced the common SASE themes with a focus on digital technology and future oriented activities. This big conference included numerous panels regrouped in 18 networks and 19 mini-conferences – close to 40 tracks in total! I presented a paper at the mini-conference entitled “Futures and Visions of Global Orders” organized by Jenny Andersson, Vincent Cardon, Melissa Fisher, and Olivier Pilmis. 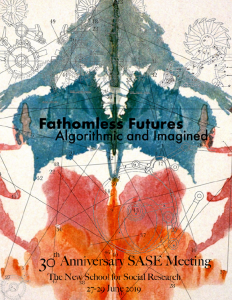 What was your paper about?

The ideational dimension of policy-making is one of my research interests since my doctoral  dissertation, where I analyze how ideas influence the adoption and functioning of market-oriented policy tools in the science, technology and innovation (STI) domain in Russia. This year’s conference focus inspired me to pursue this analysis and to focus on crucial component of ideational context of the policy-making in the STI domain, the images of the future.

What are the main findings of your research?

First, my paper enhances the understanding of the ways of representing the future that widely shared by the country’s political and administrative leadership. I think that the most important result is how country-specific visions of the future, centered on what may be called “great Russia” politics, are intertwined with the investment professionals’ – namely venture capitalists (VCs) – vision of the future, that is spread all over the world. Russian policy in the STI domain has among its objectives serving the “great Russia” politics, that is, reinforcing the country’s standing in international relationships. In this regard, the policy is in line with what the dominant part of political leadership, especially conservative, believe to be the country’s strategic priorities. The corresponding image of the future is the one where Russia struggles for its place in the international relationship system, in particular, through resisting the technology-fueled dominance of the West. In apparent contradiction with this image, the policy tools used in Russia in the STI domain are in line with Western “best practices”, being market-oriented and using venture capital ways of doing as a key reference. My main contribution is to show that there is no great contradiction between the images of the future coming from the venture capital industry and those dominated by the “great Russia” logic. Why is it so? First, the venture capital’s perspective on the future is centered on the revolutionary technologies and products that radically transform – “disrupt” – existing markets and create new ones, thus changing the world. This idea implies that economic actors face the imperative of leading or facing this endless disruption in order not to be whipped out of the markets of tomorrow. Second, the “great Russia” politics nowadays frames the economic sphere as a key battlefield where the country has to consolidate its power. The country’s activities in the STI field framed as a fight for a decent share of the markets of tomorrow (and consequently for its standing in the world) blends the venture capital perspective with the “great Russia” politics.

Putin’s words that the one who will master Artificial Intelligence, will master the Universe made news. But what are the arguments that the president uses to support his claim? In other speeches, the country’s leader referred to the future volume of AI-related market to support his argument about the strategic importance of this technology. My analysis explains how markets and the “mastering of the universe” are intertwined in the images of the future of the Russian political leadership.

What are your plans regarding this line of research?

The next step is to put my analysis in context, since the association between the politics of international competiveness and the STI policy, in particular the mobilization of the venture capital, is not unique to Russia. Just as Russia, China actively uses venture capital to achieve strategic goals, primarily the country’s competiveness in the world economy, blending the future imaginaries of the nation’s rise to power with those of technological development. Similarly, Western democracies justify many State-supported initiatives in the STI domain by mobilizing the catch-up rhetoric, implying that investment in new technologies is key to the country’s standing in the future world order – as it was in the case of the National Nanotechnology Initiative in the US. Thus, I am motivated to show that the Russian case I presented at SASE is not exceptional.