The DRS research project ‘Sustainable journalism for the algorithmic future’ in partnership with the Aleksanteri Institute and Swedish School of Social Sciences of the University of Helsinki invite the submission of papers to be presented at the online conference Automation and data-driven journalism beyond the Western world: Actors, practices, and socio-political impact on May 5–6 2021.

Algorithmic systems and other data-driven practices exert increasing influence over today’s societies, reshaping how social and economic systems function (Gillespie 2014). Algorithms are society’s new “power brokers,” dictating the stories that we pay attention to, the activities we participate in, and the people we connect with (Kitchin 2017). The news media is among those industries where artificial intelligence and algorithms are making strides and reordering the playing field as their use diversifies and expands. AI and algorithmic systems are implemented in newsrooms at various stages of the workflow: from smart tools that assist journalists in producing stories to the fully automated production of news articles, and from audience data analysis that informs editorial decisions to algorithmic recommendation systems that match specific content to users. On social media platforms, that form an increasingly central node in news consumption, algorithms not only generate news feeds based on our acquaintances’ actions and advertisers’ preferences (Van Dijck & Poell 2013) but also perform as actors with their own judgment (Carlson 2018). The algorithmic systems employed by social media platforms, news aggregators and other recommender systems can therefore affect the journalistic process and professional practices of media practitioners.

Current scholarly debate on these issues prioritizes and builds upon empirical studies conducted in democratic, Western contexts. Much less is known about the drivers of digital innovation uptake and its socio-political impact in other political and cultural contexts, and this is problematic. Countries such as China, Russia, India, Brazil, South Africa and South Korea do implement global or introduce their own AI-driven tools in their news media This challenges the mediated reality they produce and can, in turn, affect global media agendas  (e.g., in the international activities of Chinese Xinhua, Russian RT and Arab Al Jazeera). At the same time, the socio-political impact of news and disinformation amplified through social media is evident across the Global South, where moderation efforts by global platforms lag behind.

This online conference strives to place the discussion of automation and data-driven journalism beyond the Western and Anglophone world. We build upon previous research (Hanitzsch et al 2019, Henkel et al 2020) demonstrating that media innovation and its adoption develop differently depending on the specific characteristics of media systems and markets. Understanding the algorithmic turn in journalism as a socially constructed process – dependent on a country’s journalistic culture, news media’s formal and informal institutions , and the societal role of media – we propose an alternative list of questions to be added to the discussion. When the main media outlets are owned or controlled by the state, who benefits from the automation of media processes, and in what way? When censorship and self-censorship are embedded into journalist professional culture, will the implementation of algorithmic systems lead to more freedom and independence of journalists, or vice versa?  How does the economic efficiency promised by automation leverage the political/ideological efficiency of media institutions in authoritarian contexts? What is the importance of algorithmic systems in spreading and amplifying propaganda and disinformation in different media systems?

We welcome both disciplinary and interdisciplinary perspectives and studies employing various social scientific methods, including comparative case-studies, ethnography, socio-legal, and STS studies. Submissions could address, but are not limited to, the following areas:

We accept two types of submissions:

Individual paper submissions should be written in English and contain a clear outline of the argument, theoretical framework, methodology and results. Abstracts should be between 250 and 500 words.

Panel proposals should be written in English and consist of a panel rationale (300 words) and abstracts of three papers (max. 250 words per paper).

Please submit your proposal through the submission portal:

The conference will be organized as online event. The hosts will strive to accommodate participants’ respective time zones.

Should you have any questions about the conference, please contact Olga Dovbysh: olga.dovbysh [at] helsinki [dot] fi

We are extremely proud that our book, The Palgrave Handbook of Digital Russia Studies, has been published and is now available in open access. Comprising 32 chapters, written by more than 40 authors, this unique volume covers all facets of digitalisation in Russia and the use of digital sources and methods for studying Russia. 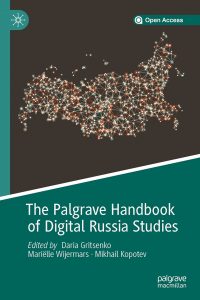 The book is available for download in pdf and epub formats here: 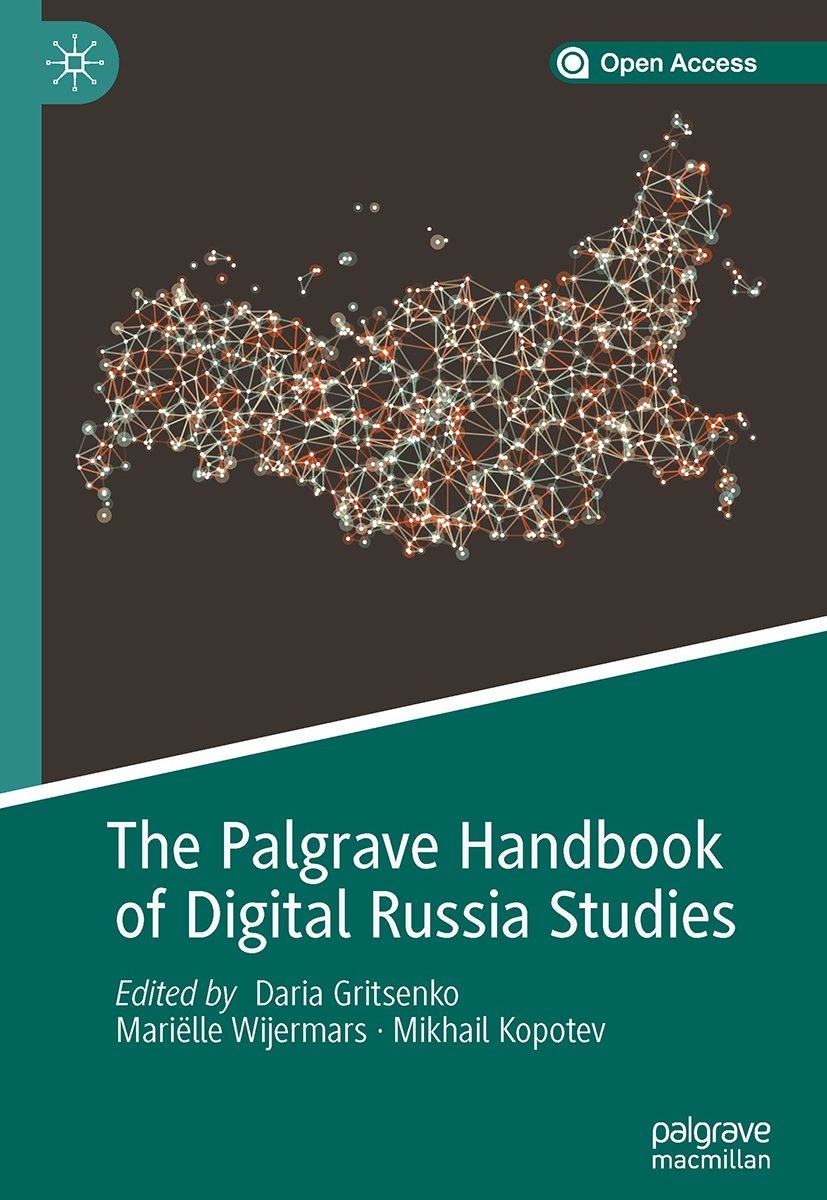 Join us on 22 October at the virtual book launch to celebrate the publication of The Palgrave Handbook of Digital Russia Studies!

Register here to receive the link for accessing the session that will take place on 22 October from 5 PM to 6:30 PM (Helsinki – UTC+3).

This groundbreaking Handbook, edited by DRS researchers Daria Gritsenko and Mariëlle Wijermars together with Mikhail Kopotev, presents a multidisciplinary perspective on how the ‘digital’ is simultaneously changing Russia and the research methods scholars use to study Russia. It provides a critical update on how Russian society, politics, economy, and culture are reconfigured in the context of ubiquitous connectivity and accounts for the political and societal responses to digitalization. In addition, it answers practical and methodological questions in handling Russian data and a wide array of digital methods.

32 chapters by 42 authors – published in open access thanks to the generous support of the University of Helsinki.

At the event, the editors are joined by several of the contributors who will introduce their chapters. During the Q&A, there will be plenty of opportunities to engage with the speakers, as well as to ask questions to other contributors joining us in the audience.

Introduction to The Palgrave Handbook of Digital Russia Studies

Run Runet Runaway: The Transformation of the Russian Internet as a Cultural-Historical Object

Q&A with the editors and contributors to the Handbook

Reviews of the book:

‘This is the most comprehensive and timely book illuminating the impact of digitalization on all spheres of Russia’s social and cultural life.  Through the lens of this Handbook, contemporary Russia emerges in all its complexities and ambiguities.’

‘A profoundly interdisciplinary resource that strikes the perfect balance between breadth and depth. Conceptually rich, analytical smart, and highly informative, the Handbook brings both students and scholars of Russia, Russian digital culture, and digital studies in general, critical insights into a newly emerging discipline.’

In a new article published in Russian professional journal Zhurnalist, Olga Dovbysh outlines three key insights from the current academic debate on news automation that are relevant for Russian newsrooms.

Olga Dovbysh is a postdoctoral researcher of the project ‘Towards Sustainable Journalism for the Algorithmic Future’, funded by the Helsingin Sanomat Foundation and lead by Mariëlle Wijermars.

We invite paper proposals for a special issue in the journal New Media & Society that will interrogate the functions and effects of algorithms in contemporary governance. Contributing to the current academic debate, the special issue seeks to conceptualize the notion of context in algorithmic governance by, first, perceiving of algorithmic governance as an activity taking place in a variety of contexts and aiming at investigating these contexts in a systematic manner. Second, by focusing not only on how algorithms are used as tools for governance, but also on how such tools can be governed – controlled and held to account – and what challenges such forms of governance imply. The use of algorithms in society can imply a moving of contestable issues from negotiable to non-negotiable spaces, thereby reducing agency and influence of human actors. Active recontextualizations can become an important tool to problematize such and other consequences of algorithmic governance and reveal possible unintended implications and effects.

The special issue builds upon a series of workshops (2019-2020) facilitated by a networking grant from The Joint Committee for Nordic Research Councils in the Humanities and Social Sciences (NOS-HS) coordinated at the University of Helsinki, that focused on the multiplicity of contexts in which algorithmic systems operate. Drawing upon the conceptual work conducted during the workshops, the special issue focuses on two key themes: multiplying the contexts of algorithmic governance and governing algorithms in context.

Multiplying the contexts of algorithmic governance

Articles are invited that explore how specific conditions impact upon the efficacy and perceived legitimacy of algorithms as tools for governance. In particular, contributions may direct attention to the manifold everyday practices through which algorithmic governance is effectuated and investigate the legal, political, cultural, economic, and technological frames that predispose and tacitly guide these. Through this focus, it becomes clear that algorithmic governance is not only a deeply contextual activity, but also an activity carried out within the frames of a multiplicity of different and often competing contexts. Identifying exactly which contexts matter when, in which ways, and to whom becomes an important task for the planning of algorithmic forms of governance in and through autonomous machine learning systems. At the same time, active recontextualization enables problematizing and resisting algorithmic governance in cases where it is perceived as illegitimate or biased.

Articles are invited that focus on the fact that algorithms at once govern, and are themselves governed by, either human or non-human agents. The increased use of algorithms in all areas of life makes the question of how to understand and sufficiently control such governing algorithms a timely and salient area of critical inquiry. Issues such as the complexity and opacity of algorithmic assessment and feedback systems as well as their growing autonomy and pervasiveness are important areas of research dedicated to improving the governance of algorithms. Articles could, for example, aim at facilitating new technical solutions, at raising public awareness, at informing practices of decision-makers and funding bodies, as well as at critically assessing cultural and other responses to the governance of algorithms.

We welcome both disciplinary and interdisciplinary perspectives and studies employing various social scientific methods, including comparative case-studies, ethnography, socio-legal studies, design studies, and historical inquiry. We particularly encourage studies that challenge the status quo, either through innovative (mixed method) methodologies or critical reflections on the state of the art. Papers could address, but are not limited to, the following questions:

Proposals of 750-1000 words should include an abstract and a short description explaining how the proposed paper relates to the special issue theme. Please submit your proposal through the submission form no later than June 30, 2020. Invited paper submissions will be due 31 October 2020 and will undergo peer review following the usual procedures of New Media & Society. Approximately 10-12 papers will be sent out for full review. Therefore, the invitation to submit a full article does not guarantee acceptance into the special issue. The special issue is scheduled for publication in early 2022, with online first publication expected from mid-2021 onwards.

Helsingin Sanomat Foundation has awarded a €130,000 grant to DRS co-founder Mariëlle Wijermars for the project ‘Sustainable Journalism for the Algorithmic Future’ (2020-2022).

The project, that in addition to Mariëlle involves Russian Media Lab researcher Olga Dovbysh, will be launched next January and run for three years (short summary below). If you are interested in getting involved or would like to know more, get in touch!

The project investigates how data-driven media practices and the increased influence of IT industries on media business affect journalism and its role in the public sphere. Integrating new evidence from a hybrid media system (Russia) into a comparative study, it helps understand the context-specificity of this impact and will formulate a vision on making journalism societally, economically and ethically sustainable for the algorithmic future.