On 20 September 2021, HeGRiC held a one-day symposium to discuss the current state of game scholarship at the University of Helsinki (HY). The questions discussed were “What does game scholarship look like at HY, and what can be done to support it going forward?”

The day was originally planned for late 2020 but was delayed due to the pandemic. The program of the day is available to read here: https://blogs.helsinki.fi/hegric/2021/09/09/symposium-schedule/ 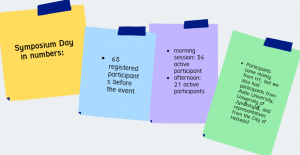 The morning session had three invited speakers to showcase some of the research being done on or with games at the University of Helsinki, including those who are being supervised by HY professors, to highlight our broader networks.

Our first speaker was Matilda Ståhl, M.Ed., from Åbo Akademi. Ståhl presented her soon-to-be-defended PhD work on online gaming communities, gender, normativity, and player values, under the title “Who is possible online?”

In the following talk, Dr Derek Fewster discussed the current situation for game scholarship at the Faculty of Arts at the University of Helsinki, noting that there is a very big interest in studying and learning about games, but that Fewster is one of very few faculty members who currently carry this load. “Better call Derek.” is a line he often hears in his position.

Finally, Dr Ben Cowley presented his and his working group’s work on the concept of flow, high performance cognition, and predictive processing, using games as a methodological tool.

After lunch, a discussion panel with some of the speakers and MA students Jakob Lindström (folkloristics) and Pavla Oubret (English literature) who are working or worked on games in their theses. The panel topics were focused on the interplay of subject areas, including the varying faculties at the University of Helsinki, the benefits, and drawbacks of interdisciplinary work and how to best facilitate such efforts.

At the end of the day, the symposium audience, speakers, and organizers participated in two workshops to answer the two main questions of the day:

In the following, we will present the results from the workshops and some additional thoughts on what the future could bring for HeGRiC and game scholarship at the University of Helsinki.

Some common themes from the workshops emerged: 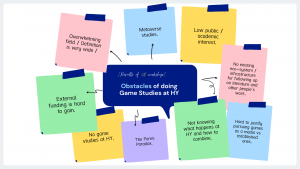 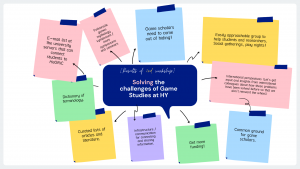 Summarizing workhops – WHERE ARE THESE MYTHICAL GAME SCHOLARS?

The main perceived obstacle for a thriving game studies community at the university currently is summarized well in one of the workshop comments: “The Fermi paradox.”

Astro-biologist Enrico Fermi popularly coined the term to denote the conflict between the suggested probability of life to humanity in space, and the lack of evidence thereof, asking: Where are they?

The game scholars in Helsinki are many, and numbers are rising, especially from a large pool of various cultural studies today, but, as evidenced by the symposium, game scholarship happens at most faculties at the university. The issue raised in the workshops points to the issue of lacking visibility and connection for students and scholars.

The many students and scholars interested in game studies are looking for a central hub for support, the workshops reveal. The symposium workshops also recognized common factors that compose challenges in an emerging field in the university: an overarching lack of resources towards funding, student supervision, teaching, courses, seminares and access to peer-support.

Our hope for HeGRic is to work towards solving these issues and bring interested parties together in game scholarship – and to model what it could look like in the University of Helsinki.

The great interest in the symposium signals to HeGRiC what we have long suspected: there is a significant interest in game scholarship across all faculties at the University of Helsinki. HeGRiC as an organisation is currently running on voluntary efforts but intends to formalize its work over the current academic year, and hopefully help implement some of the suggestions brought forward in the workshops. The most acute ones being starting a HeGRiC email list for game scholarship news and events and create a low-threshold community for students with an interest in game studies, who want to learn more, seek some kind of input on their own work, or just get to know like-minded students and scholars. HeGRiC will be reaching out to student organizations such as board games and role-playing clubs to assist with spreading the word.

Join the Games studies seminar? The seminar is multidisciplinary, open to all levels of students and (junior) scholars. Credits are negotiable. Contact: Derek.fewster@helsinki.fi

Join HeGRiC! HeGRiC has a Discord that anyone who is interested in game studies at the University of Helsinki can join and find each other. Please e-mail heidi.rautalahti@helsinki.fi for an invite. 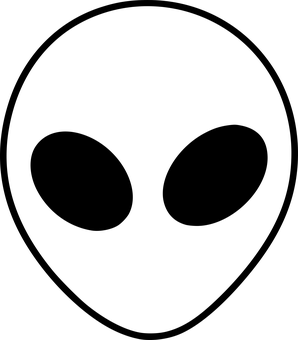 This is the program for the one-day symposium The Present and Future of Game Studies at the University of Helsinki hosted by HeGRiC – the Helsinki Game Research Collective. Remember to register here!

10.45: Derek Fewster: Game studies at the Faculty of Arts, an attempted survey.

11.50-12: general discussion and information about the afternoon schedule.

Below you will find the abstracts for our speakers’ talks, as well as a short biography.

Title: Who is possible online?

Abstract: What tools for identity construction are available in the multiplayer game Counter-Strike: Global Offensive? How do the young men participating in the study (co)construct identities utilizing these tools? As they are also students taking part in an Esports programme, how is the in-game experience and educational context connected? These centrals questions are central in Matilda’s research and will be discussed in relation to community, diversity and visuality, highlighting implications for possible online identities as well as implications future game-related research endeavors.

Bio: Matilda Ståhl (MEd) is a doctoral candidate in Educational sciences at Åbo Akademi University. Matilda’s presentation is based her doctoral thesis which she hopes to defend later this autumn. One of her supervisors, Hannah Kaihovirta, is based at the University of Helsinki and in parallel with Matilda’s thesis, they further collaborate on research projects focusing on gamification and aesthetic processes

Abstract: Ludic games are a classic kind of cognitively-demanding dynamic task governed by uncertainty. Yet people learn to perform these tasks with great skill, despite lacking any kind of external reward. Theories like expert performance and Flow purport to explain the phenomenology behind this. And the predictive processing framework provides a way to explain the brain mechanisms that generate the phenomenon. The major lack in our understanding lies somewhere between these two scales, and although phenomenology and neural circuits seem very distant in scale, considering Flow in terms of predictive processing may be a way forward. Here we will look at one study of Flow, learning, and cognitive performance in game play.

Bio: Benjamin Ultan Cowley is an associate professor of AI in learning and education, Faculty of Educational Sciences. Cowley obtained his PhD in Computer Science from University of Ulster studying computer game player modelling, and pursued post-doctoral and habilitation projects on learning, attention, and cognitive neuroscience within the broad domain of human-computer interaction. His group HiPerCog aims to develop our understanding of high-performance cognition.

Title: “Game studies at the Faculty of Arts, an attempted survey”

Abstract: The survey presents the traditions and state of Game studies research and tuition within the Faculty, since around 2007. The story is of course not particularly glorious so far, but can display some possibilities for further developments and interests spanning more than the Humanities at Helsinki.

Bio: Derek Fewster is a Senior lecturer of history, with a background in Archaeology as well as Medieval, Nationalism, and Historical culture studies. He is since 2021 responsible for two modules covering “Uses of History and Heritage studies” and “Post-digital culture”, providing this tuition in Swedish for the whole faculty. He is also an avid gamer of both digital and board games.

Abstract: Game studies refers to a multidisciplinary field of scholarly studies of games and play which is establishing as an independent academic discipline in Finland. Helsinki Game Research Collective (HeGRiC) is an emerging network for game studies, based at the University of Helsinki. Its purpose is to increase the visibility of game studies and to facilitate collaboration and expertise accumulation within the University. This essay discusses the origin and goals of HeGRiC as a network to support game studies, discusses the development of game research at the University of Helsinki, and finally, outlines the network’s declarations of intent.

At night fall the architect Engel drew a map filled with puzzles. Through cobblestones the winding trail of myths circled into the city. Find the forgotten route, unravel the secret path and solve Englel’s code! Find the beginning at the Helsinki Cathedral Unioninkatu side stairs. The game can be played alone or as a group using your own mobile smart device. The first puzzle is given at the start from 17.00 o’clock. Updating info at katsomukset.fi and here!

HeGRiC stands for Helsinki Game Research Collective and is a group of cross-disciplinary scholars based at the University of Helsinki. Our aim is to fruitfully pursue the study the intersection of games and other disciplines. The HeGRiC researchers represent a variety of fields, completely in line with our goal to treat games – digital, social, as well as analogue – as dynamic products of cross-disciplinary interests.

The aim of HeGRiC is to facilitate game research visibility, collaboration and expertise locally at the University of Helsinki.

The HeGRiC group is currently focused on scholarly quests as follows:

If you would like to get in touch with us, feel free to write any of the below listed HeGRiC members.

Join the Games studies seminar? The seminar is multidisciplinary, open to all levels of students and (junior) scholars. Credits are negotiable. Contact: Derek.fewster@helsinki.fi

Join HeGRiC! HeGRiC has a Discord that anyone who is interested in game studies at the University of Helsinki can join and find each other. Please e-mail heidi.rautalahti@helsinki.fi for an invite.