The programme for the seminar is now available here.

The registration for the Summer Seminar 2019 has been opened. Please apply here. 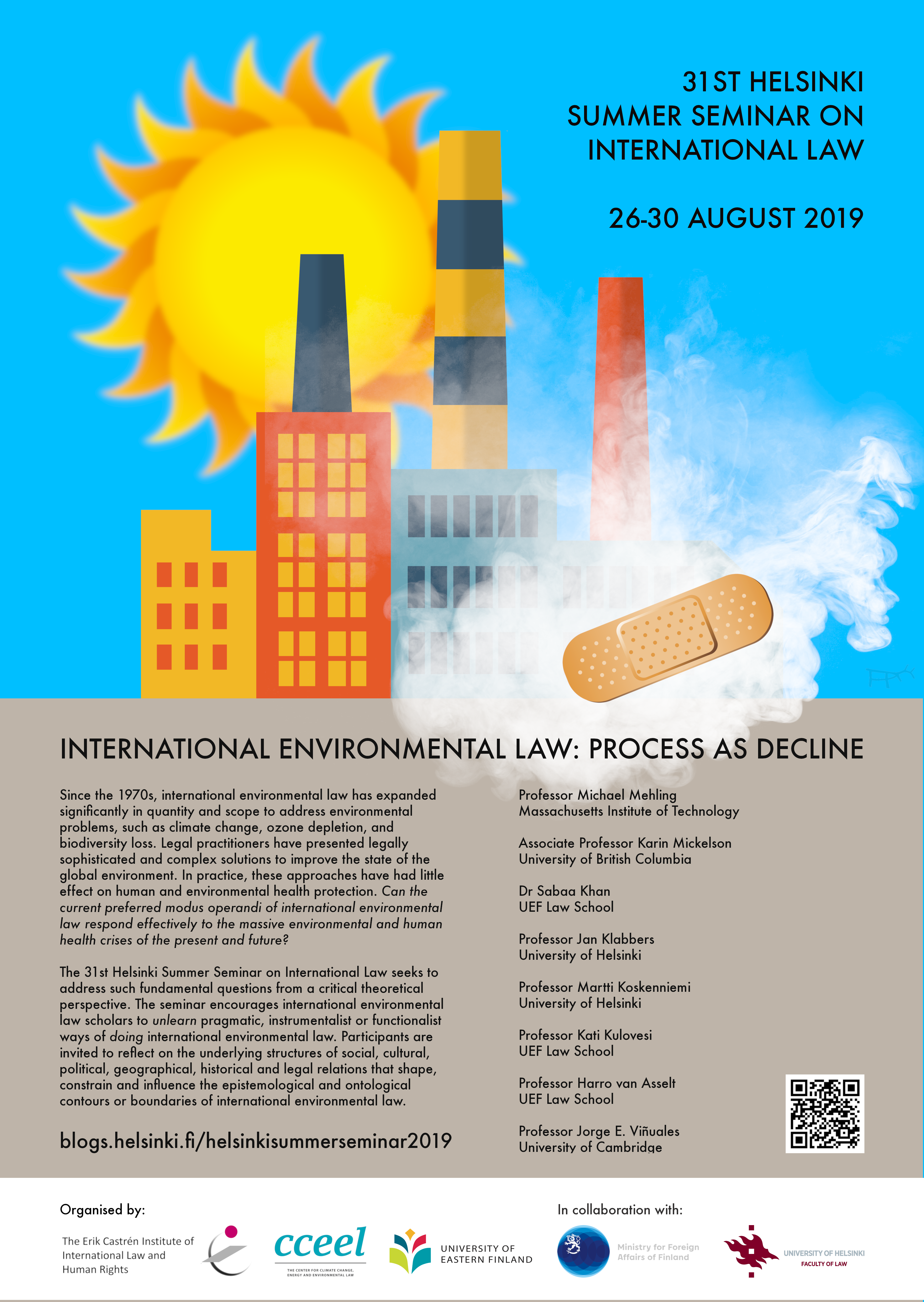 We are delighted to announce that the Erik Castrén Institute and the UEF Law School are organising the Helsinki Summer Seminar on International Law on ‘International Environmental Law: Process as Decline’ on 26 – 30 August 2019.

Since the 1972 Stockholm Conference on the Environment and Development, international environmental law has continued to evolve at a remarkable pace. A number of treaties have been adopted to address environmental problems, including climate change, ozone depletion and biodiversity loss. In total, there are more than 3,000 multilateral environmental agreements in force. Their governing bodies have adopted thousands of decisions and created numerous sub-processes and -bodies, giving birth to an extensive and complex specialised area of international law.

However, the impressive expansion of international environmental law has not necessarily led to improvements in the state of the global environment. The international climate regime illustrates starkly the effective limitations of international law-making with respect to human and environmental health protection. Nearly three decades after its creation, the UN climate regime has yet to succeed in halting the growth of global greenhouse gas emissions. On the contrary, it seems that climate change is happening much faster than previously estimated. Similarly, the world’s biodiversity continues to decline at an alarming pace despite several treaties and multiple soft law instruments adopted under the 1992 Convention on Biological Diversity. The situation is no less daunting with respect to chemical pollution, a global phenomenon on the continuous rise that has proven impossible to address cogently under the existing cluster of international environmental agreements devised to regulate transboundary movements of hazardous chemicals and wastes. Indeed, one of the few successful international environmental instruments seems to be the 1987 Montreal Protocol on Substances that Deplete the Ozone Layer with recent scientific evidence showing that the ozone layer has started to recover due to controls on harmful substances introduced by the Protocol.

While international environmental lawyers are well aware of these challenges, the main solutions they are capable of offering tend to be procedural ones: new negotiations leading to new instruments, institutions, rules and processes. These tend to be legally sophisticated and complex, but their environmental effectiveness often remains questionable. The international climate regime is a good example. Since 2007, there have been several negotiating processes tasked with producing an adequate global response to the looming climate crisis. However, even the 2015 Paris Agreement falls manifestly short in this regard. While its goals are ambitious, it has deferred some of the most critical issues of climate change mitigation and climate finance to further negotiations – to be resolved another time, somewhere else. And while certainly innovative for an environmental treaty in its explicit attention to human rights and indigenous rights, the Paris Agreement’s attempt to create a bridge between these fragmented fields of international law rests in its preamble, providing relatively little insight on the legal operationality of such a task.

The shared limitations of diverse branches of international environmental law, from climate change to chemicals, compel further reflection on the overarching legal field, with a view to understanding whether the preferred modus operandi of international environmental law, as reflected in its common legal forms, framings and institutional structures, is capacious enough to respond effectively to the massive environmental and human health crisis that fatally grips the contemporary life space, from a molecular to global level.

The 31st Helsinki Summer Seminar on International Law is organized in cooperation with the Finnish Ministry for Foreign Affairs.

Further information on the programme and registration will be provided shortly.