Decolonial Ecology: Thinking from the Caribbean World (2021) by Malcolm Ferdinand

By Onni Ahvonen, University of Helsinki 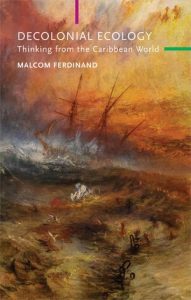 The worsening global ecological crises justify the increasing attention given to sustainability science, environmental thinking generally, environmental policy, and activism. But recent research by writers from the Global South has called into question the state of the art.  Both the ‘conventional wisdom’ and the alternatives offered by the ‘Western Left Consensus’ are fundamentally flawed. Global South alternatives, including ecological knowledge sovereignty, have been proposed by Southern writers. Decolonial Ecology: Thinking from the Caribbean World (2021, Wiley), originally written and published in French as Une écologie décoloniale (2019), is an invitation to think about the present climate apocalypse from the geo-social and geopolitical location of the Caribbean world. Written by Malcolm Ferdinand, a Black scholar, this book highlights the colonial, racial, and patriarchal constitution of capitalist modernity, and the climate crisis unleashed upon human and non-human life, convincingly arguing that the climate crisis is not a result of undifferentiated human activity as the Anthropocene framework might suggest, but a product of the racial-colonial world-system.

A central contention is the “double fracture” that permeates modernity—the separation of ecological questions from those related to colonialism and enslavement. Ferdinand identifies this double fracture in the Western environmentalist tradition and in the anti-colonial/antislavery traditions. The former focuses on environmental degradation but cannot connect the destruction of Earth to colonialism, land dispossession, and racial slavery. The latter sidelines environmental issues in its struggle against colonialism and slavery. Ferdinand’s intervention is an attempt to bridge and synthesize anti-colonial and abolitionist genealogies with movements and traditions struggling against ecological destruction. However, this book is not seeking to vindicate the “apolitical” environmentalism emanating from the Global North, which has rarely confronted Empire, questions of colonial and neo-colonial value transfers, and white supremacy on a global scale. Instead, Ferdinand calls for a reinvigoration of anti-colonial and anti-racist internationalism and worldmaking in the fight against climate breakdown.

Colonial inhabitation and “the hold”

The core arguments are presented through a series of powerful metaphors, drawing inspiration from poetic and historicist traditions in Afro-Caribbean thought. Ferdinand deploys concepts like “colonial inhabitation”, “the matricides of the Plantationocene”, and “the hold”. Through these discursive tools, Ferdinand excavates and names the ways modernity is constituted by racial subjugation, coloniality, capitalist exploitation, patriarchal power structures, and ecological devastation—with a focus on how these systemic forces manifest in the Caribbean.

A central concept is the notion of “colonial inhabitation”, which refers to the violent and extractive relationships colonists had to the land(s) they conquered and the people(s) they oppressed. This relies on maintaining a Cartesian divide between nature and (European) Man and is constructed using an exclusionary colonial-racial logic. Only white colonists were seen as being capable to inhabit geographical spaces, while the racialised and/or non-European “Other” were excised from practices of inhabitation. Historically, this dispossession took the form of land theft and violent genocide against Indigenous populations—especially women. Colonial inhabitation entailed a comprehensive transformation of ecosystems and the people embedded therein. Such “engineering” happened through the introduction of private property relations, the construction of plantation economies, and “the mass exploitation of human beings via a hierarchical organization of production that featured a master and servants” through enslaved, indentured, and forced labor regimes (p. 33).

Another central concept, “the hold” or “hold politics” is manifested in a myriad of violent techniques used to subdue and oppress enslaved peoples, but it “also symbolizes a relationship to the world and a way of relating to the other” ( p. 51, original emphasis). The hold is most evident on the slave-ship, where slavers literally held their captives below deck in unimaginable conditions.  However, hold politics is not reducible to the slave-ship, as it extends to the plantation economies and settler societies encountered after the Middle Passage. Ferdinand argues that hold politics is not merely about material oppression, but also ontological/epistemological dehumanisation—the enslaved deemed in- or subhuman and “kept in an alien relationship to the world” (p. 51).

Breaking the grip of the hold

Ferdinand exposes the material, epistemological, and ontological forms of domination that colonialism and racial capitalism imposed on Indigenous peoples and enslaved Africans, and he highlights the histories and ways in which enslaved, dispossessed, and subjugated peoples resisted and refused the politics of the hold. The book reminds us that slavers came to recognize the enslaved as political agents when they exerted their demands through resistance. This resistance  cannot and should not be compared to the violence of the hold. As Walter Rodney reminds us in his own book, The Groundings with My Brothers (2019), “Violence aimed at the recovery of human dignity and at equality cannot be judged by the same yardstick as violence aimed at maintenance of discrimination and oppression”. Frantz Fanon echoes this in The Wretched of the Earth (2001), where he, among other things, advances the argument that decolonization is not a reformist affair, “metaphor”, or “dinner party”. By necessity, decolonisation is a comprehensive and fundamental destruction and transformational reconstruction of the colonial order of things. For Fanon, “Colonialism is not a thinking machine, nor a body endowed with reasoning faculties. It is violence in its natural state, it will only yield when confronted with a greater violence.”

These anti-colonial genealogies are constantly present in Ferdinand’s work, and through these lenses he presents a forceful critique of Western environmentalism. For Ferdinand, this tradition is embodied in the metaphor of “Noah’s Ark” which, like the Anthropocene term, depicts humanity as an undifferentiated whole, equally responsible for the Earth’s destruction. As Ferdinand argues, this metaphor fails to distinguish between those responsible for the climate crisis and those disproportionately suffering its consequences. Clearly, the Noah’s Ark metaphor subsumes hierarchies, differences, and processes of social differentiation. For Ferdinand, the metaphor begets two important questions: Who is allowed to board the ship in the first instance and who is left outside? Settlers, colonists, and capitalists are welcomed aboard, while negatively racialized people and those confronting the colonial order are left to fend for themselves.

Ferdinand’s book is a robust  critique of Eurocentric accounts of modernity. Yet, in Chapter 12, he makes an argument that seems out of place considering the books’ general message. Ferdinand attempts to present two towering Enlightenment intellectuals, Jean-Jacques Rousseau and Henry David Thoreau, as “Maroon writers”.

Marronage is historically understood as the act of slaves escaping and fleeing the plantation. Maroons, led by many Black women, would establish settlements and communities in places where the slavers would have a hard time finding them, for example protected by mountains and forests. This was an arduous journey as the Maroon had to “inhabit the uninhabitable” (p. 149) and hide from colonial authorities while surviving harsh climates. Maroons became caretakers of Mother-Earth, finding alternative ways to existing with nature instead of replicating forms of colonial inhabitation. For Ferdinand, Marronage embodies the values of decolonial ecology as “it is through care and love for Mother-Earth that it is possible to rediscover one’s body, explore one’s humanity, and emancipate oneself from the Plantationocene and its slaveries” (p. 152).

Given the horrifying experiences that Maroons had to go through in order to survive their escape from enslavement, it is curious that Ferdinand relates such practices to Rousseau and Thoreau who, compared to enslaved Africans, lived on the other side of the “global color line”. Ferdinand reads Rousseau and Thoreau as writers who were not satisfied with the “depoliticized naturalism and environmentalism” prevalent in Europe: as thinkers concerned with exposing the horrors of colonialism and slavery. Given Thoreau’s advocacy of civil disobedience and his vocal anti-slavery positions this argument might not seem too far-fetched. However, and as is evident for anyone who has engaged with Charles Mills’s, The Racial Contract (1997), Rousseau’s famous social contract is not constructed against the “racial contract”, but rather upon it. Mills notes that Rousseau’s “praise for nonwhite savages is a limited paternalistic praise, tantamount to admiration for healthy animals, in no way to be taken to imply their equality. Let alone superiority, to the civilized Europeans of the ideal polity.” In Rousseau, as Mills argues, we find the characteristic racist and colonialist attitudes that have shaped modern European philosophical thought. Europeans are presented as civilized political agents capable of democratic governance, while non-Europeans are seen as primitive savages in need of civilizing. Thus, using the term “Maroon writer” to describe Rousseau seems problematic at best.

Ferdinand is concerned with “challenging colonial ways of inhabiting the Earth and living together” and understanding that the fight for a liveable planet is “intimately linked to a demand for equality and emancipation” (p. 175). Ferdinand’s book makes the fundamental, yet crucial, point that our collective struggles against climate breakdown cannot be narrowly focused on environmental issues, but rather has to actively connect to struggles against racism, coloniality, capitalism, and patriarchy—emphasizing that these systems of domination and exploitation are entangled and interlinked, rather that isolated and separate from each other.

For Ferdinand, healing the double fracture of modernity through a praxis of radical worldmaking “implies recognizing the plurality of human beings and non-human beings as a condition for thought” and action (p. 230). The movement for climate reparations being one concrete political example of such action (see: the People’s Agreement of Cochabamba).

In concert with other radical Afro-Caribbean thinkers, Ferdinand’s focus on ecosystem collapse and the relation between human and non-human worlds attempts to bring ecological questions to the very centre of the Black radical and anti-colonial traditions. This invitation to think and organize with radical genealogies and movements emerging from distinct yet interrelated geopolitical and geo-social locations should be at the forefront of current struggles against the climate crisis caused by colonialism and racial capitalism on a global scale. This book is worthy of deep engagement.