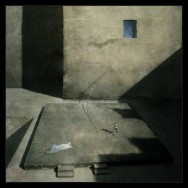 On the verge of rounding off the 2012 Fall semester Qualitative Research post-graduate Course, and in the middle of building personalized study agendas for research skill development, a poem was written. ‘What skills, abilities, attitudes, knowledge do you hope to gain on the way toward dissertation completion?’ being one of the crucial questions brought  some thought and insights along. Carrying with him visions, timelines, strategies, missions, and a pile of resources, Antti McFan enters the scene.

A Ph.D. student named Antti McFan
Worked all day in the field and all night with a plan,
Writing, revising, and publishing too
To make lots of points with the valvojat crew.

To ohjaajat in their tri-focal specs
Their sallow complexions and starch collar necks,
Care not for the students nor the time they must waste
If a paper is lacking, authorship misplaced
They bounce back proposals and do what is prudent
To ignore a hard-working doctoral student.

To get back to Antti he struggled along
Till an ache in his head told him something was wrong.
He went to the doctor and “doctor” said he,
“There’s a buzz in my brain, what’s the matter with me?”
So the medico thumped, as medicos do,
And he tested his pulse and his reflexes too
And his head, and his heart, and his throat and each lung,
Then Antti said, “ahhh” and stuck out his tongue.

Then the doctor said, “God, what a narrow escape,
But a quick operation will put you in shape.
Your brain’s overworked like a motor run down
And you’re flirting with death every time you turn round.
I must take out your brain for a complete overhauling.
You, in the interim, take a rest from your calling.”

So Antti McFan went right under the knife.
He struggled home brainless and kissed his own wife,
While Doc Hautamäki and two other men.
Were putting his brain back together again.
Well the weeks rolled around and Antti McFan
Never called for his brain from the medical man.
The doctor got worried, gave Antti a ring,
Said, “you’d better come over and get the damn thing!”
“Thanks doc, I don’t need it,” said Antti McFan
“My research is merely a program plan.”

So Antti now wears a starch collar to work
And he hides in the lairs where the program folks lurk.
And his research is smooth but it’s never unfurled
In the minds, hearts or souls of the research world
Still the pride and the joy of the ministry plan
Is brainless, likable, Antti McFan