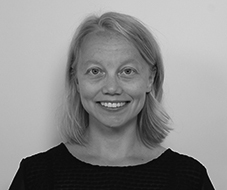 Dr Elisa Uusimäki (PhD, 2013) is a scholar of ancient Jewish literature and holds the title of docent at the University of Helsinki, currently working in the Helsinki Collegium for Advanced Studies and serving as the PI of the research project “Conceptions of Virtue in Early Judaism” (2018-2020). Uusimäki’s area of expertise is Second Temple Judaism. She has published a peer-reviewed monograph and numerous articles in major journals on topics such as wisdom and torah, the Dead Sea Scrolls, early biblical interpretation, the figure of the sage in antiquity, and exemplarity. Apart from Helsinki, Uusimäki has undertaken research at the University of Manchester, Yale University, Hebrew University of Jerusalem, Rijksuniversiteit Groningen, and New York University.

Anna-Liisa Rafael works as a researcher in the Academy of Finland Centre of Excellence in “Reason and Religious Recognition”. She is currently completing her dissertation, which analyses the reception history of the story of the mother and her seven sons in the Maccabean historiography and early Jewish and Christian writings, demonstrating how the story gradually comes to crystallize a particular, virtuous moment in the history of Jews. Tolonen has published on the moral exemplarity of biblical figures, late antique recognitions of the Maccabees as martyrs, and miraculous prayer in 2 Maccabees. She is interested in biblical reception history and story-telling in ancient literature for argumentative and didactic purposes. Next, Tolonen aims to explore further the mother of the seven and, in particular, the link between life and death, and that between hope and despair, in her virtuous figure.

Dr Sami Yli-Karjanmaa (PhD, 2013) works as an Academy of Finland Postdoctoral fellow and specialises in Greek Jewish texts and early Christian philosophical traditions. In particular, he has written a peer-reviewed book and major articles on the Jewish intellectual Philo of Alexandria and the Jewish historian Flavius Josephus, both of whom lived in the early Roman era. After his current project focusing on Greek philosophy and its Jewish application in early Christianity, Yli-Karjanmaa will join the VIRTUE project and embark on analysing the concept of ἀρετή in Hellenistic Jewish thought.