I am a researcher in the Department of Physics of the University of Helsinki, working in the field of Space Physics. My main research interests reside in the interaction of solar storms with near-Earth space. These storms are born from giant eruptions at the Sun which eject large amounts of solar particles and magnetic fields into space. When impacting Earth, these storms can cause beautiful auroral displays, but also have harmful effects, such as disrupting GPS signals, damaging spacecraft electronics and even causing power failures.

Just like meteorologists forecast atmospheric weather, space scientists aim at forecasting space weather, that is, the conditions in near-Earth space, and providing warning for incoming storms. This requires a detailed understanding of the physics of the Sun-Earth connection, from the eruptions of the solar storms at the Sun, their propagation through the solar system, to their interaction with the Earth’s magnetosphere, the magnetic bubble created by our planet’s magnetic field which protects us from direct contact with the solar particles. 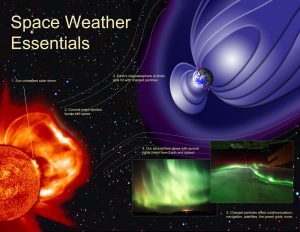 In my work, I am focusing on the latter part of this complex puzzle: how solar storms interact with the Earth’s magnetosphere. I am particularly interested in the role played by the outermost regions of near-Earth space, outside the magnetosphere, which can change the properties of the incoming solar storms, and may thus throw off some of our space weather forecasts. Some of the results of this research were featured in an article in Eos: Earth and Space Science News.

My current projects are centred on electromagnetic waves and their propagation across the different regions of near-Earth space. These waves play an important role in transporting energy and accelerating particles in the Earth’s magnetosphere, but many open questions remain concerning their sources and the physical processes responsible for their transmission. In a recent work, we discovered that solar storms can profoundly change the wave properties in some regions of near-Earth space, effectively changing the “Earth’s magnetic song”. We later found out that this hinders their transmission into the Earth’s magnetosphere. Further investigations are ongoing to unravel these complex processes, both within my team at the University of Helsinki and internationally, in the framework of an international ISSI team.

I gave a public talk about Earth’s magnetic song at Tiedekulma in Helsinki, which is available on youtube: https://www.youtube.com/watch?v=Ewdd6GK9WL8