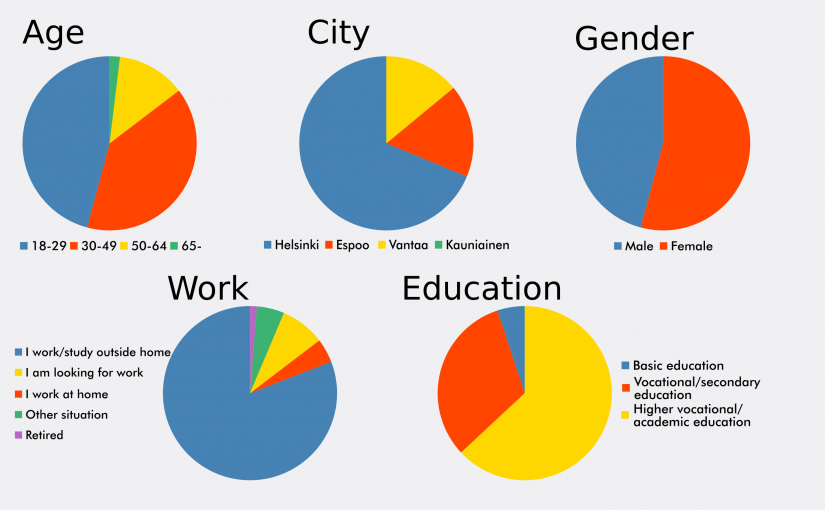 The ‘average’ participant in this research was a young (18-29 year old) Helsinkian female with higher vocational or academic education and who was currently working or studying outside home. The higher age groups (over 50 years old) were underrepresented. This is most likely because the interviewers most often found the consultants from their own social circles and among peers. This reason can also be explaining factor for other skewing in the data, for example, why there is such a high percentage of higher education attainers.

A misfortune is that there is no data for Kauniainen, even though this was included in the study. A more systematic gathering of consultants from different areas could have enabled us to analyse whether some languages were ‘hotspots’ for certain languages. Regrettably, we only received 48 answers related to the neighbourhood were people lived. Those answers were very varied and only Kontula, Hakaniemi, Kruunuhaka, Herttoniemi, Pitäjänmäki and Vuosaari had more than two answers. The areas of Kontula, Pitäjänmäki and Vuosaari have been identified to contain a lot of non-Finnish speakers for example by the city of Helsinki[5].

Average time lived in Finland was 11,6 years, median being 9 years, maximum 48 and minimum 0. The answers were rounded before calculating, thus people who had only recently moved to Helsinki were marked as zero. Six of the consultants had been born in Finland and 28 had grown up in Finland.

Family was the most common reason for coming to Finland. This answer included those who had moved to Finland as children. Second most common reason, studies, was often only part of the reason: many had come to Finland as exchange students, but then had decided to stay for a reason or another. The other reasons included a need for adventure, wanting to get out of one’s home country, falling in love — perhaps too early to call it a family reason yet —  or just interest in Finland or Helsinki.

Below, the areas where the consultants came from have been divided into subdivisions based on the United Nations geoscheme. United Nations geoscheme was chosen because of number of regions and arbitrariness. Most of the consultants were from Europe and there is a large difference between areas. Some of them, e.g. Pacific Islands and Caribbean, are even totally unrepresented. This is not surprising when considering the statistics which record languages from different regions, which show only few speakers of languages which originate from those areas. The lack of Southern Africans on the other hand is an inadequacy as the mother language statistics suggest there are at least few people from Southern Africa.