Finally, after nearly two years we met in person! Our first face to face workshop in Copenhagen in the beginning of March was a wonderful opportunity to get to know each other better, but also to discuss all kinds of issues from practical problems to methodological and theoretical dilemmas. Meeting in person facilitated stimulating imagination and innovativeness in our current and future research. In our first face to face workshop, continuing from our online workshops on theory and on methods, we shared ideas for research, learned from each other and discussed future work – and also celebrated the chance to finally meet in person!

To ensure that the discussions would follow relevant research issues, participants were invited to suggest topics they wanted to discuss before we met using a collaborative brainstorming tool, miro. These issues fell broadly into three topics: firstly, imagination, storytelling and sufficiency; secondly methods and experiments; and finally action and critical research and making an impact. Participants could then choose parallel sessions on the topic that followed their interest most closely. 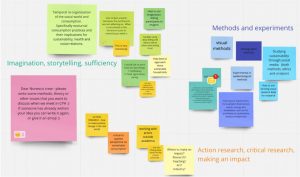 The imagination, storytelling and sufficiency group discussed methods for reaching out and studying vulnerable households. In the discussions it is important to emphasise that such households are never the problem and do not have to change – rather, other households (as well as policies and institutions) need to do so. Using workshops, focus groups and storytelling instead of interviews could enable a focus on what ‘sustainable’ everyday life could be like, instead of focusing on the consumption of that particular person or household. The group also discussed whether there is a space between upper and lower limits of consumption and how it is important to be critical and avoid glorification of poverty when talking about the need for absolute reduction of consumption.

The group discussing methods and experiments started with the statement that what an experiment is should be broadened. Labelling it as an ‘experiment’ might not be important, but instead ways of applying it in research could be beneficial, for example by just referring to comparison of two distinct groups. Then, the group found common ground in the suggestion to look at the possibility of using existing data before conducting new, expensive data collection (like surveys). Finally, the group put up a few claims. For example, exploiting how experimental designs (in a broad sense) appear clear and illustrative can benefit the communication and presentation, for example to different stakeholder groups, including policy makers and users. Similarly, the group discussed how visual representations, also just simple graphs, can contribute to also making complex studies appear simple and understandable. In addition, the group also pointed at taking the receiver with then in the process of doing research. Rather than starting with the results/conclusion or introduction/background, one could start from the methods, for example “we interviewed two groups of households. The one group… “.

The action and critical research and making an impact group spent a long time discussing sufficiency and how this is at loggerheads with current imaginations of the good life, and that much of the empirical investigation we have conducted on sufficiency is quite middle class. In our second session, we turned from philosophical discussions to more concrete actions on making an impact beyond the classroom and publishing cycle. Here we compiled a list of various initiatives for research outreach that we shared with the broader group, with the hope that we can all feel perkier about making a positive difference.

Interspersed with the parallel sessions we met up in the whole group to share the insights from the smaller groups. These sessions were a way to connect to the bigger group and apply some of the niche discussions. During the final plenum we also started to discuss ways of keeping our network active beyond the final NOS-HS -funded workshop scheduled for early Autumn. Hearteningly participants felt that the network was beneficial in sharing not only research issues, but for finding collaborators for future projects, and we have a groundswell of enthusiasm to continue the network.

Finally our keynote, Bente Halkier, Professor with more than thirty years of experience in Sustainable Consumption inspired us to become more compassionate, aware and engaged academics by sharing her personal journey and successes (and also some failures). Inspiringly, Halkier is involved in many initiatives to communicate research beyond the ‘Ivory Tower’ and we heard about her experiences from presenting at cafes at Danish science week and to being a board member of the Danish Climate Council. Having these insights into someone with such a long and illustrious career, who is so passionate about her work was the cherry on the top of a rich workshop.

Next up we will meet in Uppsala for our final workshop  on policy relevant sustainable consumption research.