The ecological definition of sustainability emerged with the Brundtland Report in 1987, which describes sustainable development as something that meets the needs of the present without negatively affecting the ability of future generations to fulfill their own needs.

1. Environmental sustainability plans to improve human welfare through the preservation of natural capital (e.g. land, air, water, minerals etc.).  Programs are represented environmentally sustainable when they assure that the needs of the population are satisfied without putting the future generations at risk to meet their needs. Environmental sustainability highlights the how business can attain positive economic outcomes without doing any harm, in the short- or long-term, to the environment.

3. Social Sustainability proposes to preserve social capital by investing and creating services that empower the structure of our society. The concept affords a larger view of the world in connection with communities, cultures and globalization. It means to preserve future generations and to support that what we do can have an impact on others and on the world. Social sustainability focuses on preserving and improving social quality with concepts such as cohesion, reciprocity and honesty and the importance of relationships among people. 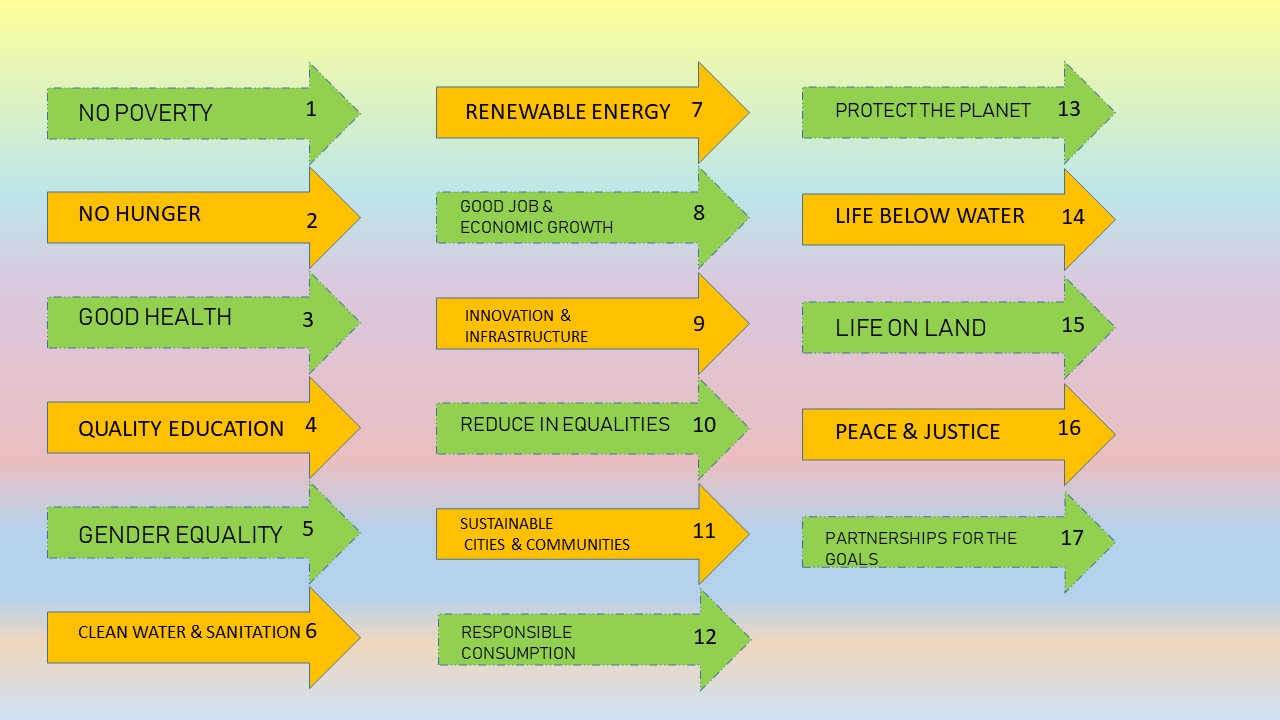 To discover that how algae are a solution to sustainability, view the goals sections below:

poverty: in seaweed farming; with the income earned from the sale of seaweeds, many farmers have experienced substantial improvements in their standards of living as they have been able to send their children to school, introduce improvements to their dwellings, enhance their diets, increase their purchasing power of material goods.

Hunger: Globally, one in nine people are undernourished. This goal aims to end hunger and produce commercial production of marine microalgae as a staple human food. These tiny organisms are the ultimate source of omega-3 fatty acids and amino acids that humans need in our diets. Microalgae are a nearly untapped resource, and are found in both freshwater and marine aquatic systems. Although they are only few micrometers in size, they produce amino acids, fatty acids, vitamins, minerals, antioxidants, polymers and carbohydrates.

Health: Humans developed on diets consisting of marine life, which are rich in omega-3/omega-6 fatty acids, proteins, amino acids and other beneficial nutrients. While not all types of algae are consumable, simple-celled algae (the same type used in our proprietary algal solution) is, and these organisms provide a long list of vitamins and anti-oxidants. They are also rich in potassium, iron, magnesium and calcium and contain other marine minerals such as iodine.

Education: Seaweed farming has provided access to education and training to poor coastal inhabitants. in seaweed farming;  many farmers have been able to increase their income and then send their children to school.

Gender:  In off-bottom cultivation in shallow water, women can tie and harvest the crop by themselves. In deeper water, where boats are necessary for raft or floating line techniques, women tend to have a smaller role, but do assist with harvesting. In India, women were the first and primary adopters of seaweed farming, which offered them an income within a safe environment (Ramachandran, 2012; Krishnan and Narayanakumar, 2013).

Clean water: Algae are often used to clean water. This practice is called phycoremediation. This is the use of algae for the removal, or biotransformation, of pollutants and toxic compounds from wastewater and carbon dioxide from effluent air stream. They also help remove the elements in water which would have led to the growth of harmful bacteria and consecutive problems.

Affordable and clean energy: Algae can potentially produce biofuels in several forms – such as biodiesel, biogas, biohydrogen and bioethanol. They present several advantages as compared to land plants: high growth rates, ability to grow on non arable land, appreciable content of lipids (energy-rich compounds). Their contents can be optimized under controlled conditions and chemically converted to fuels.

Decent work and economic growth: Seaweed farming is a labor-intensive activity. In a family operation, spouses, children and immediate family members work together on the farm. They prepare and seed the lines, harvest the crop, and provide maintenance. In the United Republic of Tanzania, where small family farms dominate, one production cycle required about 66.5 hours of labor input and generated about 100 kg of dried seaweed. This implies that annual production of one tonne of dried seaweed entailed 84 person-days (assuming 8 working hours per day) of labor input and could generate 0.28 full-time equivalent jobs per year (assuming 300 working days per year). In this situation, an industry with 10 000 tonnes of annual production of dried seaweed  could generate 2 800 full-time equivalent jobs. As seaweed farming tends to be a part-time occupation, the number of people participating in seaweed farming tends to be much more than the number of full-time equivalent jobs.

Industry, innovation and infrastructure: Algae hold promise in the development of biodegradable, innovative biomaterials. Because of the environmental conditions in which they develop, they synthesize original chemical compounds which can have specific applications in the industry.

Reduce inequalities: In the microalgae industry would be a great benefit to the environment and to the product quality which would reflect a better living standard of society.

Sustainable cities and communities: Algae and urban development seem quite far from each other. Products made from algae are used in binding agents in all sorts of building materials. The “building with Bio-Intelligent Quotient” (BIQ ),Situated in Hamburg, Germany ,  is the first algae powered building in the world. BIQ is a cubic, five-storey passive house with two differently designed facade types. The sides of the building that face the sun have a second outer shell that is set into the facade itself. Microalgae are produced within this shell, enabling the building to supply its own energy.

Responsible consumption and production:  seaweeds assimilate the fish/molluscs-excreted ammonia, phosphate and CO2 converting them into biomass and providing an important ecosystem service.

Climate action:  Increase in CO2 level in atmosphere needs to be addressed by effective and sustainable carbon sequestration technologies. Out of numerous CO2 sequestration technologies, biological methods using algae could be one of the most efficient and economical ways. Algae can be extensively used for utilizing CO2 and the resulting biomass may be used for producing biofuel and multiple value-added products. Many countries have started implementing carbon credits with a fiscal value as price of polluting the air. This has spread awareness worldwide and attracted investments in carbon sequestration via microalgae cultivation.

Life below water: There are many factors that can cause a Dead Zone, but nutrient pollution has been identified as one of the main human activities causing the problem. In order to increase their crop production, farmers often use fertilizer. Excess fertilizer can run off the land and into the ocean. The ocean can end up with excess nutrients leading to a process called eutrophication. This can encourage the growth of algae that can block sunlight from reaching the water. When the algae in the ocean dies it decomposes. As part of this process the oxygen in the water is used up. Without oxygen in the water, the animals and plant will not survive.

Life on land: Algae and their derived products contribute to preserve life on land like using them as fertilizers

On the far side of current take-make-waste industrial model (Linear economy), the circular economy is a model of production and consumption, which includes reusing, repairing and recycling materials as long as possible. It requires constantly and regularly dissociating economic activity from the consumption of limited and non-renewable resources, and prevention of waste and harmful emissions to soils, water and air. Circular economy is based on three principals: 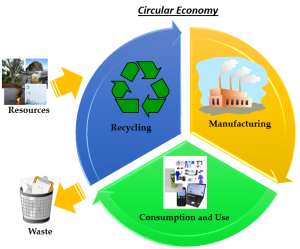 Moving towards a more circular economy could bring positive advantages including:

The ‘bioeconomy’ attributes to those parts of the economy that exploit renewable biological resources from land and sea including forests, animals, microorganisms such as algae,  along with utilization of biological processes and principals to produce sustainable food, components and energy. Therefore, a ‘circular bioeconomy’ is a zero waste closed system, which is the global destination to protect a sustainable future. The bioeconomy can turn algae into fuel, recycle plastic, convert waste from the food production chain into new clothing and transform industrial byproducts into valuable biobased materials. 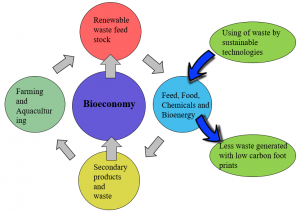 Importance and benefits of algae in circular bioeconomy

The main goal of this page is to give certain scientific and practical information about my PhD project and the importance of cryptophyte.

In the first step, I cultured some strains of cryptophyte (Figures 1, 2 and 3) which were in the collection of Dr. Peltomaa at the University of Helsinki (Algological laboratory of Almalab-complex- http://www.almalab.fi/AlmaLab_-ymparistolaboratorio/AlmaLab.fi.html). 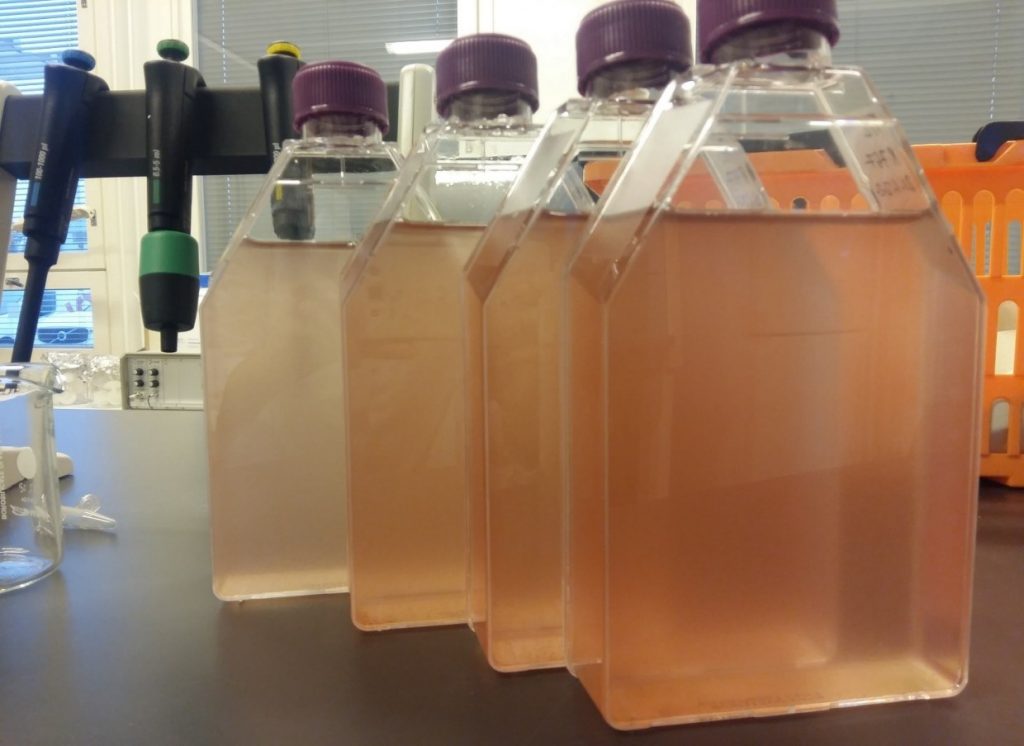 Next, I  put my cultures under different experimental conditions to find the best growth rate with high levels of bioactive compounds (Figure 4).

Later, I will publish information about experimental conditions and results of my experiments with more details.

Recently, algae both macro and micro algae have received considerable attention due to their increasing economic importance as source of biochemical, drugs and bioactive compounds and their functions as a healthy and safe alternative source for food additives, pharmaceuticals, cosmetics and so forth.

Until now, among different types of algae, a few species have been identified to be useful for commercial application. Therefore, identification and characterisation of algae are Still relatively new scientific areas and need more searching and evaluating. 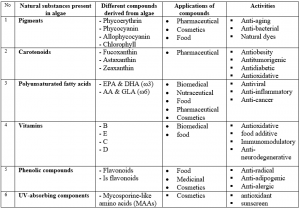 Some sources to get more information:

Welcome to Potent Algae ” the potential application of algae and some information about my research plan”.

As microalgae are abundant all around the world and even most of them are cultivated easily, they can be a huge and economically (cost-effective) source to produce different productions for human, plants and animals. Cryptophytes , one of the major groups of phytoplankton, are unicellular ﬂagellates with more than 20 genera comprised of 200 species. They are important primary producers in freshwater and marine habitats. However, the study of high value materials synthesis in cryptophytes is still at the first stage.

As a doctoral student at the University of Helsinki, my research aims to identify some bioactive compounds of cryptophytes and their commercial applications. Accordingly, I will assess optimal growth condition and the quantity and quality of some productive components of cryptophytes under divers experimental conditions.

This page gives me a great opportunity to keep you all updated on my research, and enlighten everyone to the importance of microalgae especially cryptophytes.