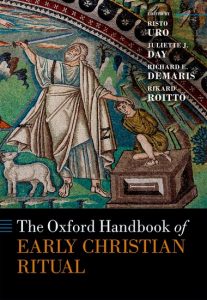 Although the REECR project came officially to an end in September 2017, new works are coming in its aftermath. In collaboration with two experts in ritual and early Christian studies, Juliette Day and Richard DeMaris, the project team has been managing a large edited volume The Oxford Handbook of Early Christian Ritual, which is now completed and will come out soon. The estimated publication date is 8 November 2018.

N.B. You can read a free sample (Introduction) here.