The Public and Private in the Roman House and Society Conference was a great success and we would like to thank all the participants. In addition to the intriguing papers presented, the comments and questions raised helped create stimulating and thought-provoking conversations. 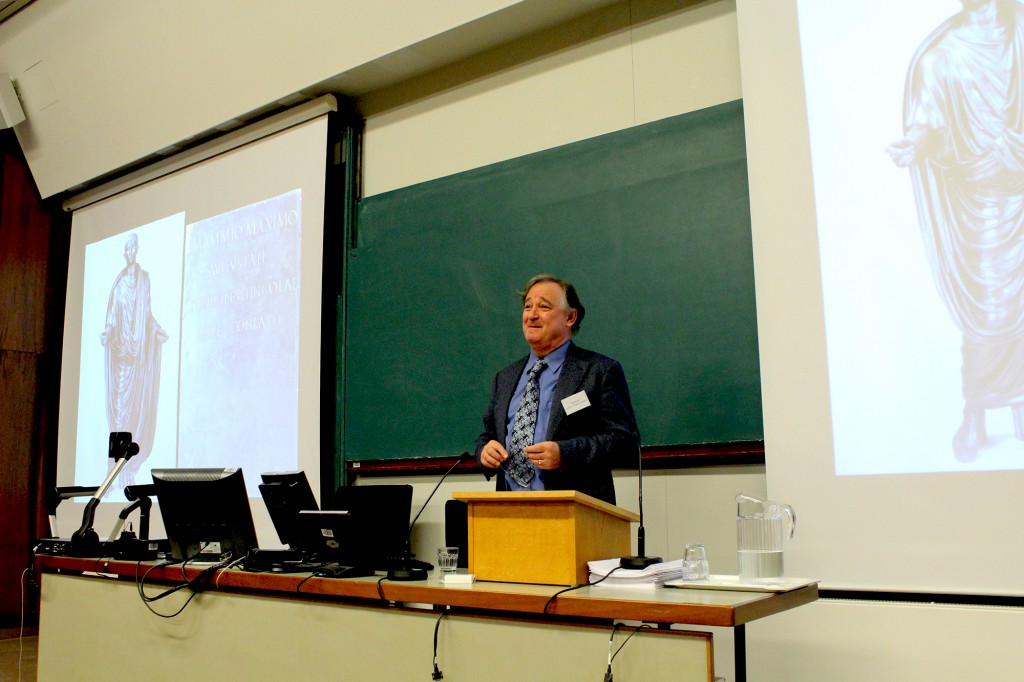 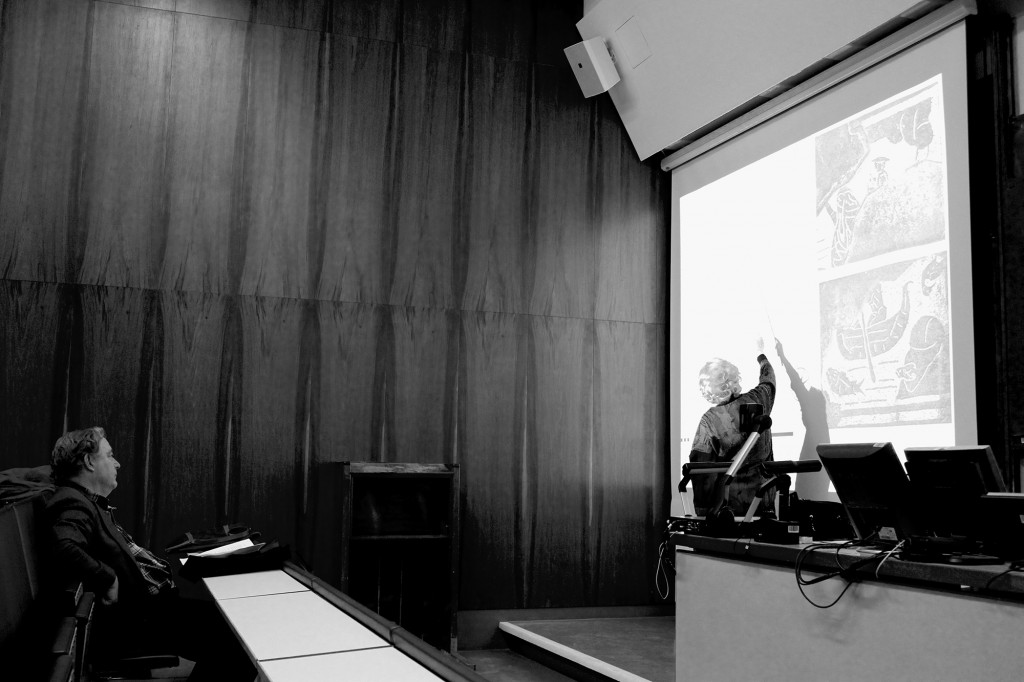 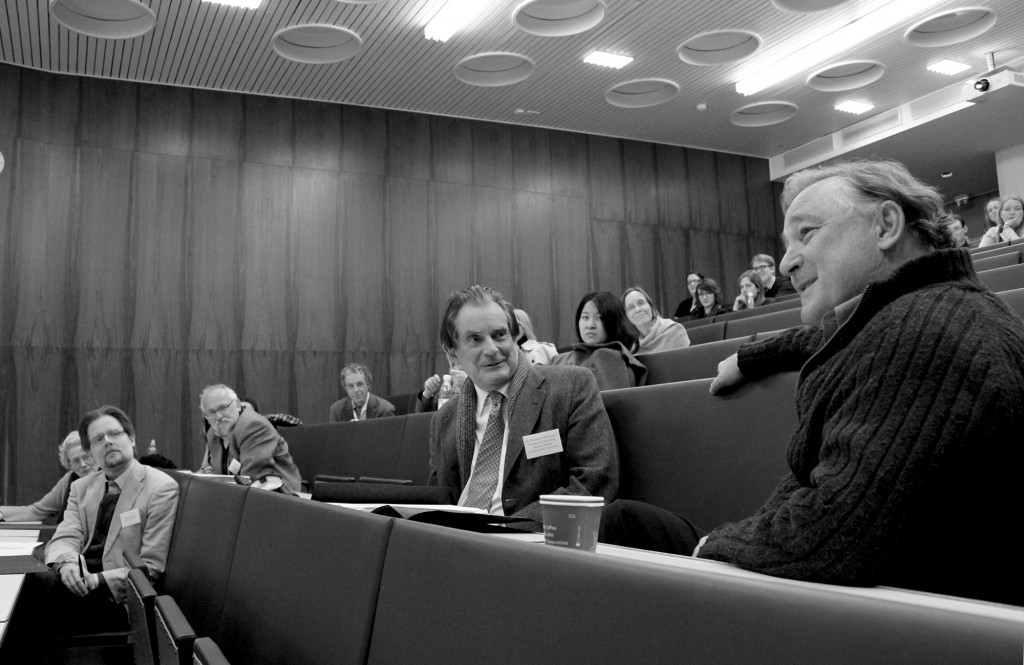 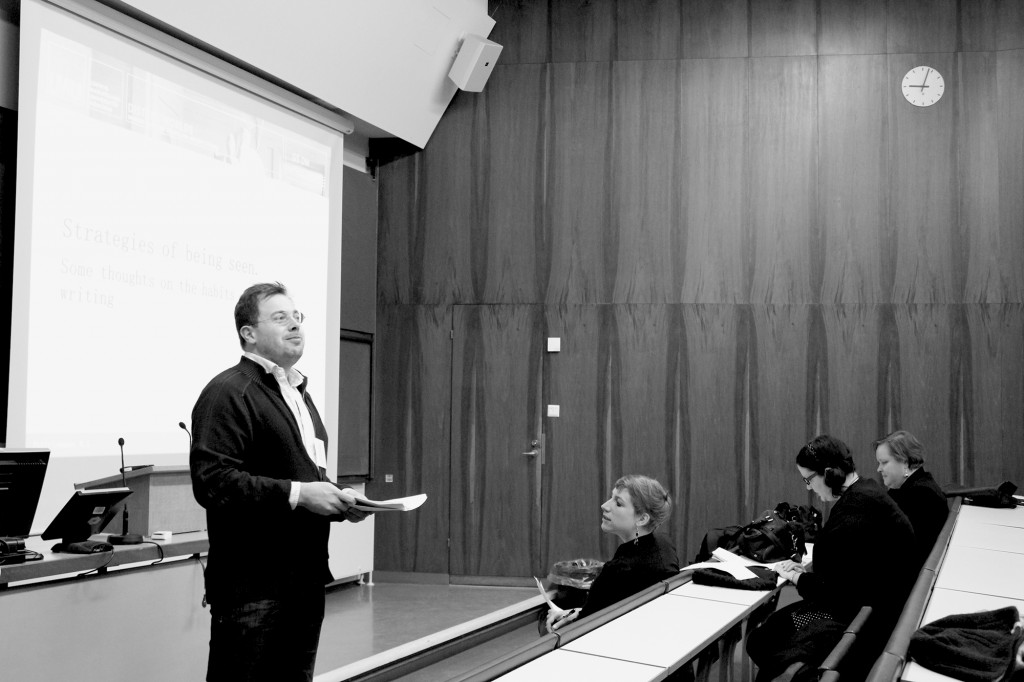 Dr. Kaius Tuori giving a short speech on the last day of the conference.

Here you can download the abstracts of the papers presented in the conference as a pdf file.

On Thursday and Friday we’ll have a two hour lunch break between the sessions. Lunches are not covered by the conference. There is a university cafeteria in Porthania where the conference is held as well as in the university main building. There are also several restaurants near the campus. Here are some recommendations.

Ichiban Sushi on Mikonkatu 8. In the same building there is a Chinese restaurant Grand Shanghai as well as a Mexican restaurant Santa Fe. Morrison’s Grill & Green is located on Ateneuminkuja, behind the art museum Ateneum, where you can also have lunch. In Kaisa Library (Vuorikatu 7) there is Gaudeamus Kirja & Kahvi, which serves salads ans soups for lunch.

An Italian restaurant Vespa is located on Eteläesplanadi 22 and Il Siciliano on Aleksanterinkatu 36.

Belge is a Belgian restaurant, located in Kluuvi Shopping Center at Kluuvikatu 5. In the same building you can also have lunch at Hanko Sushi, Fratello Torrefazione coffee house or Armas-pikaruokala.

On Yliopistonkatu, right next to the university, there is Wrong Noodle Bar and next to it a Nepalese restaurant Base Camp.

By the Senate square you can have lunch either in Sunn Restaurant or Café Engel.

Other options can be found at Eat.fi Helsinki -service.

Each session consists of three 20-minute papers + 10 minutes of discussion.
All sessions are held at the Suomen Laki -auditorium (PIV) in Porthania, Yliopistonkatu 3 (ground floor).

Opening of the conference: Kaius Tuori
9-10 Keynote Margareta Steinby: Transformations of the public space at Lacus Iuturnae, Rome
10.15-11.45 Session 1 Mixing Public and Private
Chair: Juhana Heikonen
Leanne Bablitz: A New Location for Legal Activity within Roman Pompeii
Amy Russell: The domestic and civic basilica
Martin Degand: The salutatio, a social ritual within the Roman house. Approach to the public/private distinction in the domus in the light of E. Goffman’s ritual notion

9-10 Keynote Andrew Wallace-Hadrill: What makes a Roman house a Roman house?
10.15-11.45 Session 4 Domestic Cults and the Empire
Chair: Anna Kouremenos
Günther Schörner: Domestic cults in the Roman Empire: Is worshipping the gods private?
Elisabeth Rathmayr: Political, religious, social and cultural functions of private houses in Ephesos
Laurie Porstner: The Origin of the Christian Cult of the Saints Derived from Roman Domestic Religion as Evidenced in Antioch

09.00/09.15-11.15 Session 7 Writing on the Wall
Chair: Kaius Tuori
Polly Lohmann: Strategies of being seen
Eeva-Maria Viitanen and Laura Nissinen: Campaigning with Houses in Pompeii: Analysis of Electoral programmata and their Locations
Deborah Chatr Aryamontri: Private and social life in middle class dwellings during the Roman Empire
Marco Giglio: Use of space in Roman Houses from III to I B.C.: new data from Pompeii

12.15-13.45 Session 8 The Social Experience of Privacy
Chair: Heta Björklund
Sandra Zanella: Public and private in domestic spaces beyond Vitruvius. The House of the Geometrical mosaics in Pompeii as a case study
Anna Kouremenos: From communal life to domestic life: the changing nature of houses and social structure in Crete from the pre-Roman to the Roman period
Hannah Platts: Power, Place and Performance: Reviewing the Role of the Villa

You can also download the programme as a pdf file: Public and Private in the Roman House and Society Conference.

Event location
All of the sessions of the conference are held on the Centre Campus of the University of Helsinki, at Porthania (Yliopistonkatu 3).

Transportation
You can get from Helsinki-Vantaa airport to Helsinki City Centre either by taxi (the fare is approximately 35-40 euros) or by bus (the buses take you to the Central Railway station). You can either take the city bus number 615, which costs 4,50 euros (cash (the driver doesn’t have to accept bills larger than 20 euros) or Travel Card only), or the Finnair bus, which costs 6,20 € (cash (bills larger than 20 euros not necessarily accepted), credit cards).

The metro station nearest to the event location is called Kaisaniemi.

Map of the Helsinki city centre

Ancient Roman houses were designed to suit both the private life of its occupants and the demands of public life. As a result, the division between public and private spaces inside the domus was a complicated topic even for the Romans themselves. Previous scholarship has tended to treat the domus in terms of a rigid division between public and private, with the same division acting as a gender marker for (male) political activities and (female) domestic activities respectively. This strict division within the household now seems outdated. The aim of this conference, then, is to take a fresh look at notions of public and private within the domus by exploring the public and private spheres of the Roman house from the first century BCE to the third century CE. The “Public and Private in the Roman House and Society” is an ongoing project organizing its second major event, building on the success of a workshop at NYU this October. Keynote speakers include Filippo Coarelli, Margareta Steinby and Paul Zanker.

We therefore invite papers that explore the complex relationship between public and private in Roman society from a variety of perspectives – historical, archaeological, philological, architectural and anthropological – in order to further the understanding of the domus as a place for social, cultural, political and administrative action.

Potential themes include but are not limited to:
– The house and the city: Political and administrative spaces
– The Roman house as political, religious, social and cultural arena
– Newest theories and methods in the study of privacy/public in the Roman House
– Public and private in material culture and artefact studies
– The provincial house: Local and Roman building traditions and usages
– Changes and Continuities of the Roman house in Late Antiquity
– Gender in the house

The conference is organized by the project Public and Private in the Roman House and Society (romanhouse.org), which seeks to contribute to the ongoing debate on privacy in the ancient world as well as the issues of how the limits between public and private spaces were drawn. In an attempt to gain new perspectives on these questions, the project seeks to utilize comparative anthropological theories concerning the conceptualization of the public/private interface.

Please submit your abstract (300 words) as a [word/pdf] file to Juhana Heikonen at romanhouse2013@gmail.com

Please include your name, academic affiliation and address in your email.

The deadline for submission of abstracts is December 15, 2012.

There is no registration fee. The organizers are unfortunately unable to aid in the travel arrangements or accommodation of participants.