The Public and Private in the Roman House and Society Conference 2014 in Rome was a success! A warm thank you to all the participants. 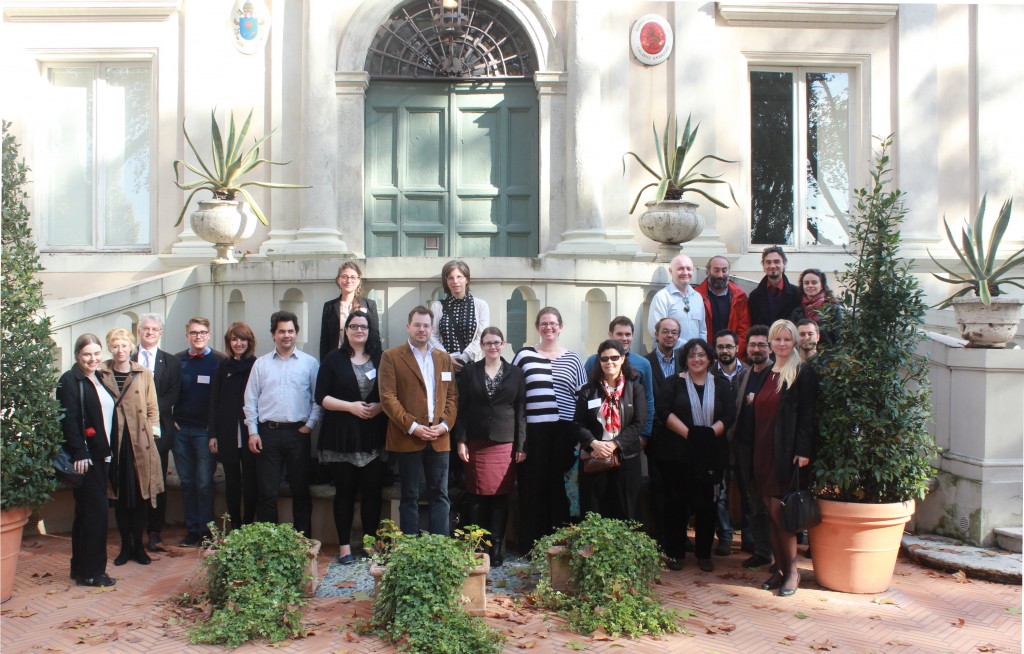 Participants of the Public and Private in the Roman House and Society Conference 2014 at Villa Lante.

14.00 Opening of the conference

15.30-17.00 Decorating the line between private and public spheres: paintings and mosaics
Chair: Kaius Tuori
Antero Tammisto: The interior decoration of the House of Marcus Lucretius in Pompeii and its parallels – How rare are the features appearing as promotion of the commissioner of the decoration?
Domenico Esposito: Interrelations between painters ’workshops and patrons in the private and public sphere: some remarks from Pompeii and Herculaneum
Fanny Kärfve: How to communicate with the outside world. The tessellated entrances in Pompeian atrium houses

17.15-18.15 Outside the public axis?
Chair: Laura Nissin
James Andrews: Reconsidering the role of the upper floor in the houses of Pompeii and Herculaneum
Miko Flohr: Shops, workshops and the commercialization of private space in Roman houses: the case of Pompeii

11.00-12.30 Parks and recreation
Chair: Samuli Simelius
Summer Trentin: Public Display and Private Life in the Pompeian Peristyle
Rona-Shani Evyasaf: It’s a room, It’s a picture, It’s a Garden! A view on the private and public aspects of the garden in the Roman house
Mieke Paulsen: Satyrs in the Garden

14.30-16.45 Private houses outside the Vesuvian area
Chair: Heta Björklund
Juhana Heikonen: The one or two Domus under San Clemente in Rome – Possibilities of Reconstructing the Changes Between Public and Private
Mantha Zarmakoupi: The Italian houses of late Hellenistic Delos: Blurring the boundaries between public and private

Ancient Roman houses were designed to suit both the private life of its occupants and the demands of public life. As a result, the division between public and private spaces inside the domus was a complicated topic even for the Romans themselves. Previous scholarship has tended to treat the domus in terms of a rigid division between public and private, with the same division acting as a gender marker for (male) political activities and (female) domestic activities respectively. This strict division within the household now seems outdated. The aim of this conference, then, is to take a fresh look at notions of public and private within the domus by exploring the public and private spheres of the Roman house from the first century BCE to the third century CE. The “Public and Private in the Roman House and Society” is an ongoing project organizing its third major event, building on the success of a workshop at NYU (October 2012) and a conference at University of Helsinki (April 2013).

We therefore invite papers that explore the complex relationship between public and private in Roman society from a variety of perspectives – historical, archaeological, philological, architectural and anthropological – in order to further the understanding of the domus as a place for social, cultural, political and administrative action. Keynote speakers include Fabrizio Pesando and Joanne Berry.

The conference is organized by the project Public and Private in the Roman House (http:// romanhouse.org/), which seeks to contribute to the ongoing debate on privacy in the ancient world as well as the issues of how the limits between public and private spaces were drawn. In an attempt to gain new perspectives on these questions, the project seeks to utilize comparative anthropological theories concerning the conceptualization of the public/private interface.

Please submit your abstract (300 words) as a [word/pdf] file to Mr Samuli Simelius at romanhouse2014@gmail.com Please include your name, academic affiliation and address in your email. The language of the conference is English.

The deadline for submission of abstracts is May 1, 2014.