The gypsum amendment of fields is a promising way of reducing the phosphorus load of agriculture. Can it be used to reduce the eutrophication of the coastal waters of the Archipelago Sea as well as the Baltic Sea as a whole? This has been investigated in the joint project of the University of Helsinki and the Finnish Environment Institute, which tested the gypsum amendment of fields on a large scale in the autumn of 2016. The pilot study was implemented in the Savijoki river basin in Lieto and Paimio in cooperation with the farmers in the area. The effects of gypsum on the phosphorus load, the biota of the rivers and the soil were studied and the results were published in the information package compiled by the project.

SAVE2 will continue the SAVE project’s follow-up studies concerning the water quality and the effects on the soil and crops until the end of 2020. In the SAVE2 project, winter spreading of gypsum will also be tested via a snow spreading test conducted in a laboratory. In addition, the aim is to model the impact of large-scale gypsum-spreading on the nutrient content of coastal waters and promote the export of the gypsum concept to the coastal states of the Baltic Sea. The project will also study the effects of gypsum on the microbial activity in soil and seek to gain a more detailed understanding of the effect of gypsum on the cation balance of the soil.

The project ‘SAVE – Improving the quality of the Archipelago Sea by applying gypsum to agricultural fields’ gathered experiences on the gypsum treatment of fields as a way of reducing the phosphorus load of agriculture. 1,500 hectares of field around the midpoint of the Savijoki river were treated with gypsum, and the effects on the quality of the runoff waters and the nutritional state of the fields were monitored. According to the studies, the gypsum reduced erosion and the phosphorus load by approximately 50%.  Gypsum also significantly reduced the leaching of organic carbon.

The SAVE2 project (Improving the quality of the Archipelago Sea by applying gypsum to agricultural fields – further monitoring) is a research project of the Finnish Environment Institute (responsible organisation) and the University of Helsinki, and it is funded by the Ministry of the Environment.

Large-scale test on the use of gypsum

The SAVE project tested the use of gypsum as a large-scale water protection measure in agriculture in cooperation with farmers. The scope of the pilot study was unique, both in Finland as well as internationally. Gypsum was spread on a total of 1,500 hectares of fields in the Savijoki river basin. The pilot tested in practice how well suited gypsum-spreading is as a part of cultivation, and what do people think about gypsum as a water protection method.

The farmers mainly saw the pilot in a positive light.  The experiences of farmers were gathered through surveys and joint events between 2016 and 2017. Nine out of ten of the farmers estimated that the different stages of gypsum treatment – delivery, gypsum storage and transport around the farm, and spreading – went well. More than 70% considered the method highly suitable for use between other work on arable land. The survey indicated that none of the farmers in the Savijoki river area observed impaired harvests or adversely affected soil due to the gypsum. If gypsum treatment were covered by the agricultural support scheme, most farmers who participated in the Savijoki river pilot project thought that they would use it.

The impact on water bodies will be studied

The research done so far in the project has provided a comprehensive image of the effects of gypsum on phosphorous runoff and the aquatic biota. The water quality is monitored by continuous measurement and sampling that provide information on the amounts of dissolved and particulate phosphorus, solid matter, turbidity and sulphate contained by gypsum in the river water.  The gypsum amendment reduces the phosphorus load immediately by approximately 50%. The leaching of organic carbon is also reduced significantly.

The sulphate contained in gypsum and its effects on the ecology of flowing waters and the quality of groundwater has been considered a risk factor of gypsum treatment. The sulphate levels of runoff waters after the spreading of gypsum remained moderate and any higher levels were short term. Gypsum was not found to migrate into groundwater. The sulphate leached by runoff waters was not found to be harmful to the biota of flowing waters. The species studied were: greater water moss (Fontinalis antipyretica), thick-shelled river mussel (Unio crassus) and trout (Salmo trutta).

Plans for use on a larger scale

Based on the farmers’ experiences and research results, policy recommendations have been drawn up on the large-scale use of gypsum in areas suited to gypsum-spreading in Finland. The SAVE project has drawn up a five-point operating model, according to which the gypsum treatment could be included in the measures of the funding period of the Common Agricultural Policy of the EU that starts in 2021. The model is also suitable for organising the aid in accordance with the programme of the Ministry of the Environment for making water protection more effective, starting from 2019.

The operating model relies on the voluntary actions by farmers and their desire to participate in making water protection more effective. The experiences of the pilot have also been applied in the NutriTrade project in developing a system that promotes voluntary nutrient reductions in the Baltic Sea.

Gypsum has the potential to become a new, significant way of reducing the phosphorus runoff from agriculture into the Baltic Sea. The method is easy for farmers to apply, and as a water protection measure it is fast and effective. According to the results, gypsum reduces the phosphorus load by approximately one half, and does not reduce yields or the arable area or require changes in the cultivation practices. The same equipment that is used for spreading lime is also used for gypsum. It is a more cost-efficient way to reduce the phosphorus load than any of the currently used water protection methods. 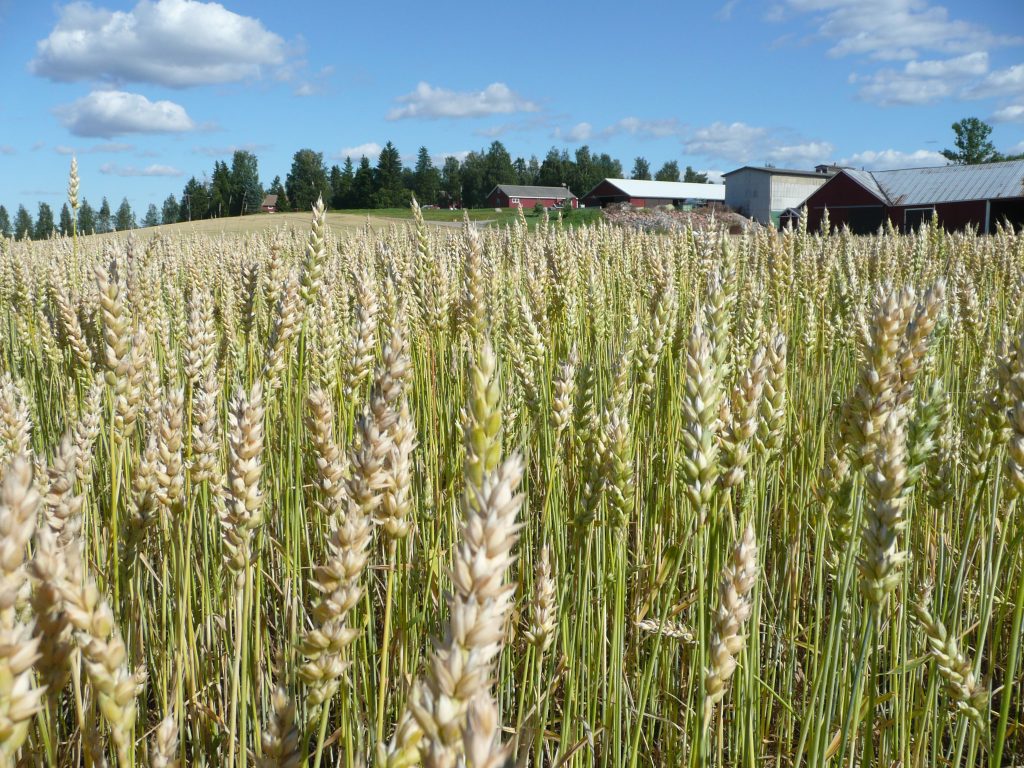 Phosphorus for the use of plants, not into water bodies

Gypsum (CaSO4 • 2H2O) enables phosphorus to remain in the soil. Gypsum increases the ionic strength of the soil, which means that soil particles form larger particles and less phosphorus is released into the runoff water. The phosphorus remains available to plants, erosion is reduced and the granular structure of the soil improves. Gypsum reduces the run-off of both dissolved and particulate phosphorus. Gypsum also reduces the leaching of organic carbon into water bodies. The effects begin immediately after the dissolution of gypsum and last for several years.

The gypsum spread on the fields in project SAVE is pure gypsum that comes from YARA’s Siilinjärvi plant. This gypsum is a by-product of the fertiliser industry and can be used for soil amendment. The gypsum in question does not contain heavy metals or uranium, which makes it safe to use on fields. Read more about the origin of gypsum.

Background material for this project can be found here.