Emilia Palonen (PI) is a Senior Lecturer in 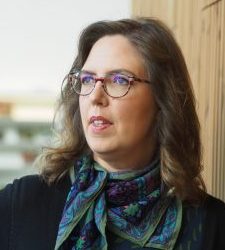 Political Science in the Politics and Communications degree programmes. She has published on populism, rhetoric-performative analysis, politics of memory, symbolic streetscapes, and practices of meaning-making, particularly in Hungary. She has also studied the rhetoric and emergence of the Finns Party in 2002-2017. Besides leading NowTimeUsSpace, she is also leading an Academy of Finland (AF) Media and Society programme’s project on social media use an expert knowledge across Europe to study cultural populism and polarisation (WhiKnow, 2019-22), and a WP on Populism and Democracy for the Mainstreaming Populism consortium (Herkman, AF, MaPo 2017-21). She supervises several doctoral students and postdocs on related themes. With a PhD and MA from the Ideology and Discourse Analysis programme at the University of Essex, she is working on the theory of hegemony in a social media era in this project. As a graduate from School of Slavonic and East European Studies, UCL, University of London, she is also excited about the research focus on the CEE area . She has recently published on “Performing the nation: the Janus-faced populist foundations of illiberalism in Hungary” in Journal of Contemporary European Studies. More info about the latest publications and activities here. 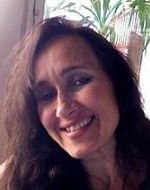 Kia Lindroos is a University Lecturer in Politics at the University of Jyväskylä. She is a political theorist working on arts and politics with a focus on conflicts, and has established the field at the European level (ECPR). She is a pioneering scholar on Benjamin, and her PhD (Lindroos 2008) is widely read. Lindroos works widely in the academic community, taking up society roles as a former board member of (IPSA, ECPSA) and currently in university funding (NORFACE). She co-supervises Aleksi Lohtaja’s PhD thesis, which also deals with Benjamin. As a theorist, she contributes across the project. Kia’s profile at the University of Jyväskylä. 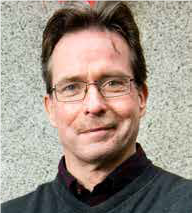 Mikko Salmela is an Associate Professor at the Center for Subjectivity Research, University of Copenhagen, and a Docent of Practical Philosophy at the University of Helsinki. He is an expert on interdisciplinary research on collective emotions, both theoretical and applied. He has published articles on the emotional dynamics of right- and left-wing political populism (with sociologist Christian von Scheve), and he is a member of the Academy of Finland project Whirl of Knowledge (PI Emilia Palonen), where he studies the affective dimensions of evaluating the trustworthiness of news as well as polarization and populism in relation to science. In this project, he contributes across the project through the study of collective affectivity in “Now-Time” and “Us Space” experiences, drawing from Benjaminian theorizing and interdisciplinary research on collective affectivity and co-authoring articles with other members of the project. For his publications, see https://ku-dk.academia.edu/MikkoSalmela 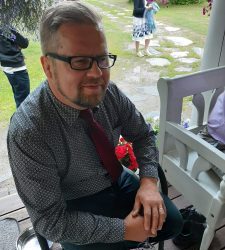 Jani Vuolteenaho is a Senior Lecturer in Urban and Public Policy at the Faculty of Social Sciences, University of Helsinki. Originally trained in Human Geography, he specialises in socio-spatial theory and cities as the focal points of societal transformation. Among his contributions to critical urban knowledge are Special Issues on Language, Space and Power: Urban Entanglements (with Lieven Ameel, Andrew Newby & Maggie Scott); Media City: Spectacular Ordinary and Contested Spaces (with Koen Leurs & Johanna Sumiala); Naming Rights, Place Branding, and the Tumultuous Cultural Landscapes of Neoliberal Urbanism (with Reuben Rose-Redwood, Craig Young & Duncan Light); Dyos-Prize in Urban History, a study of working-class everyday life in industrialising Helsinki (with Heikki Paunonen & Terhi Ainiala); Critical Toponymies, an essay collection on the politics of place naming (with Lawrence D. Berg); investigations of social aspects of urban eventization (with Sami Kolamo, Guy Puzey, Matthias Wolny et co.). In addition to the study of the politics of populism, time, and space in Central Eastern Europe, his current research undertakings focus on neoliberalized urban development, promotional policies, their popular reception and contestations; and inner-city and peri-urban waterfront transformations. 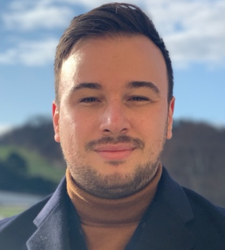 Ionut Chiruta is a Ph.D. candidate at the University of Tartu and a Marie Curie-Skłodowska fellow in the FATIGUE Project (Delayed Transformational Fatigue in Central and Eastern Europe: Responding to the Rise of Populism). His doctoral thesis, under Dr. Vello Pettai, wants to reveal how populism is shaping Romanian politics and reconstructing the memory and political identity of the Hungarian minority. In addition, Ionut will have his secondment at the Corvinus University of Budapest and at the Romanian Institute for Research on National Minorities from Cluj. Alongside his academic responsibilities, Ionut will be an intern at the Minorities’ Rights Group International from Budapest. Ionut has a MAc in Media Studies from the Universitetet I Oslo and a BAc in Communication from Cuza University. Ionut followed other courses at the University of Tartu (EE) in Semiotics, at Maastricht University in Media Representations, and at the University of Helsinki in Rhetoric-Performative and Post-Foundational analysis. Forthcoming article:  “Challenging the rule of law in Romania: the metamorphosis of political discourse towards populism as a last resort.” 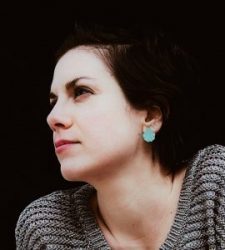 Katinka Czigány is a doctoral candidate at the University of Helsinki, in the faculty of Social Sciences. She has a background in Gender Studies and Philology. Her research interests are right-wing populism and gender politics in Hungary and Austria, feminist activities and possible ways of emancipation and resistance. Her current work is organized around the concept of hegemony and the question of what role the concept of gender plays in hegemony building, that is, is hegemony at all possible without performing gender? Currently she is working in cooperation with the Academy of Finland funded research project Whirl of Knowledge. Cultural Populism in European Polarised Politics and Societies, where she is working on the topic of masculinities and right wing populism. As a researcher in the current project, she is focusing on hegemonic and non-hegemonic spaces, such as stadiums in Hungary and a virtual museum in Romania, and studies what role spaces play in performing “us”. 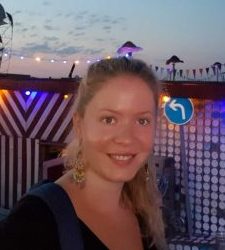 Anniina Hyttinen is a grant researcher and a PhD candidate in Sociology at the University of Helsinki. She completed her master’s level studies majoring sociology in The Master’s Degree Programme in Ethnic Relations, Cultural Diversity and Integration. In addition, she holds a BA in Finno-Ugric Linguistics, Hungarian Language and Culture. Her research focuses on Hungarian nationalism, the radical right and, more recently, on the possibilities for emerging counter discourses and contestation in Hungary, which is moving towards more authoritarian rule. Her main academic interests are nationalism, populism, the radical right, Hungary, ethnic relations in Eastern Central Europe, and visual ethnographic methodology. 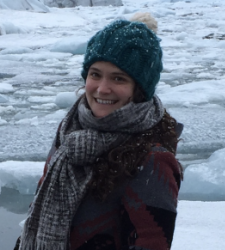 Ilana Hartikainen is a PhD candidate in Political Science at the University of Helsinki’s Faculty of Social Sciences. Her dissertation explores celebrity populist success in hybrid media systems through the case study of the Czech Republic. In this project, she will be focusing on how Czech celebrity populist leaders use key historical figures and places from contemporary Czech and Czechoslovak history to gain success, while also contributing to the project’s research on sports stadiums. She holds master’s degrees in Russian, Central and East European Studies and Political Science from the University of Glasgow and Corvinus University of Budapest, respectively. She is also a member of the Department of Education at the Institute for the Study of Totalitarian Regimes in Prague, where she co-created the educational website Socialism Realised: Life in Communist Czechoslovakia, 1948-1989 and contributes to creating and promoting history teaching material. Prior to starting her PhD, Lani worked as a journalist.  Twitter: @lani49 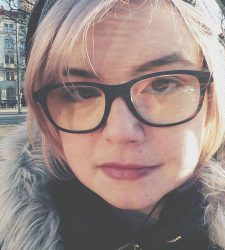 Laura Sibinescu is a post-doctoral researcher based in Helsinki University’s Department of Political and Economic Studies. She is currently working on social media data analysis for Mainstreaming Populism in the 21st Century and Whirl of Knowledge: Cultural Populism in European Polarized Politics and Societies, funded by the Academy of Finland. On this project, she is researching the emergence of a queer demos in online spaces through the use of social media affordances to reclaim queer history and culture. In recent years she has expanding her interest in the use of computational methods in political science. A few questions she is interested in exploring empirically through this approach are: who is the demos of digital democracy? How do politicians and the public co-produce political communication through social media? How well do online/offline repertoires of political action complement each other and translate between media? And what is the mobilizing potential of social media for political participation, especially in fragile democracies? More information about Laura:  https://laurasibinescu.wordpress.com/ Twitter: @laurasibi 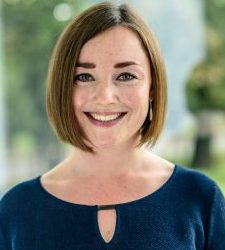 Sabine Volk is a PhD candidate at the Jagiellonian University in Kraków and a Marie Sklodowska-Curie Fellow within the EU-funded Horizon2020 project “Delayed transformational fatigue in Central and Eastern Europe: Responding to the rise of illiberalism/populism” (FATIGUE). Sabine’s research interests include discursive approaches to populist and far right politics, social movements, and memory. In particular, her PhD dissertation focuses on the politics of memory related to the 1989 East German ‘Peaceful Revolution’ in the context of contemporary far right populist mobilization in Dresden and eastern Germany. Within “Now-time, Us space: Hegemonic mobilisations in Central and Eastern Europe”, Sabine will apply a performative approach to discourse analysis to study how memory is publicly performed on the streets of Dresden, intertwining space with ideology and claiming places to demonstrate power. Besides her academic work, Sabine regularly blogs about her fieldwork experiences in the city of Dresden on https://populism-europe.com/fatigue/early-stage-researchers/sabine-volk/ 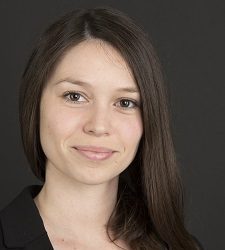 Marina Vulovic is  a doctoral  candidate  at  the  University of Helsinki  (2017-2020)  funded  by  the  Doctoral  Programme  in  Political, Societal and Regional Changes (PSRC). With a BA from the University of Belgrade (Serbia) and an MA from Heidelberg University (Germany), she works on Serbian-Kosovar relations and how hegemonic narratives around political myths have been renegotiated in Serbia since 2012, focusing on the importance of Kosovo for the Serbian nationalist project. She publishes on the Brussels dialogue, performative statehood in Northern Kosovo, etc. She is also working on a series of articles for a local NGO in Kosovo, in order to bring the Brussels dialogue closer to the public. She has been a visiting researcher at the University of Oxford (UK), the University of Graz (Austria) and the Leibniz Institute for East and Southeast European Studies (Germany). In the project, she contributes with finishing her PhD, later authoring it into a monograph, as well as co-authoring two articles and co-editing the final volume of the project. More information about Marina: https://researchportal.helsinki.fi/en/persons/marina-vulovic