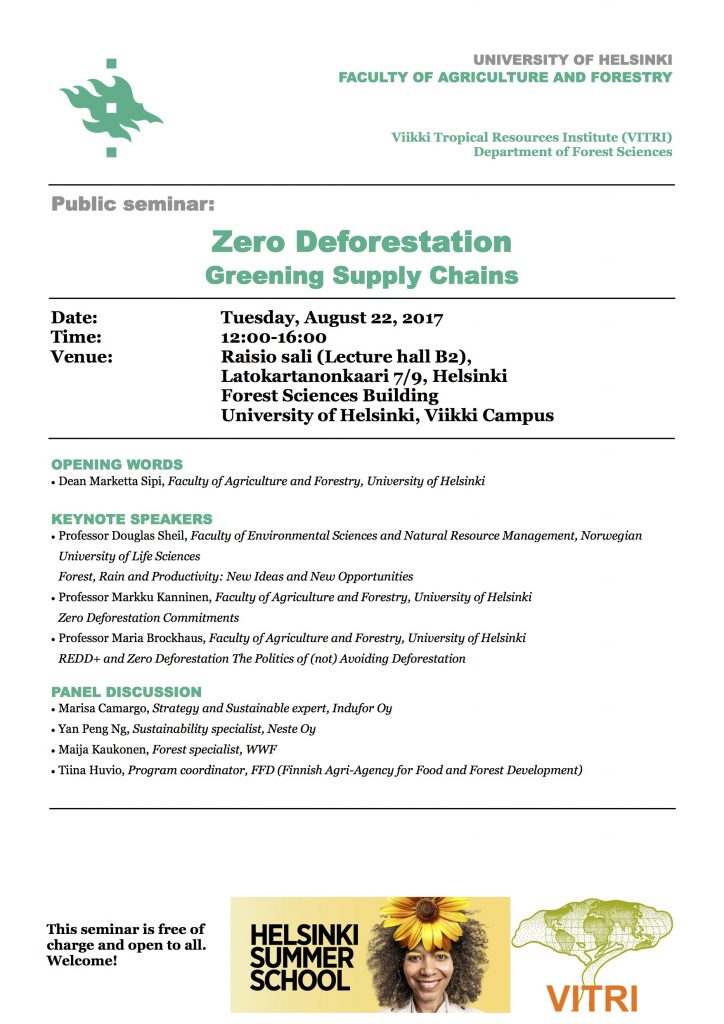 It’s said that “All’s well that ends well”. And indeed, today being the last day of formal lectures from invited speakers, lived up to the phrase. It was a fitting climax to the past ten days of lectures. Unlike previous days when summer school usually commence lectures at 9.00 in the morning, today we were given the morning off, to focus on our group
presentations. Shortly after noon, the public seminar started in Lecture Room B2, a spacious and contemporary lecture hall shaped like an Amphitheatre – and indeed the show began with Prof. Markku Kanninen calling the seminar to order and giving a brief introduction. 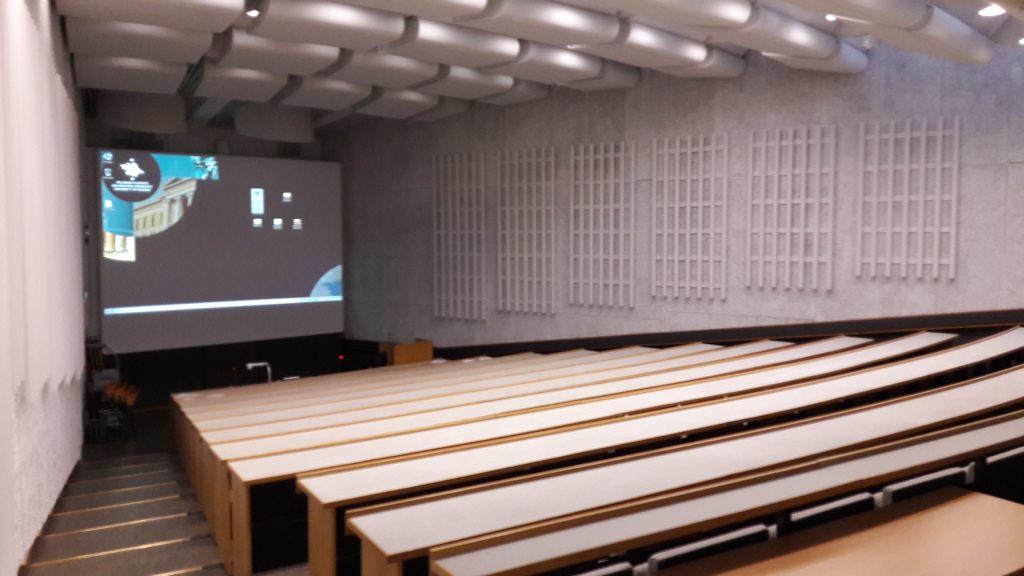 Dean Marketta Sipi of the Faculty of Agriculture and Forestry, University of Helsinki graced the occasion by giving the opening remarks. Her brief but insightful statements set the right tone for a fruitful discourse on the vision of achieving ‘zero deforestation’ within global supply chains of key commodities whose production, processing, and distribution is causing forest loss with its associated adverse impact biodiversity, greenhouse gas emissions, erosion, water pollution, etc. The event line up a number of highly acclaimed and published scientists of internal repute for the keynote addresses; these were Professor Douglas Sheil of the Faculty of Environmental Sciences and Natural Resources Management of the Norwegian University of Life Sciences, Professors Markku Kanninen and Maria Brockhaus both of the Faculty of Agriculture and Forestry, University of Helsinki.

Prof. Sheil discussed forests, rainfall and productivity. He addressed the issues and current knowledge about the effect of trees and forests on rainfall and groundwater and indicated that contrary to early assertions about trees depleting groundwater stocks; current scientific studies suggest the opposite, more especially in the drier regions of the world with less than 1000mm annual rainfall. He stressed that tropical forests because of their large leaf area, high canopy height, and rough surface act like ‘machines’ for evaporating moisture which contributes to cloud formation and rainfall. Their relative distances from the oceans where winds with relatively higher pressures flow inland however influence this ability. He was however quick to admit that there is still a lot that is unknown concerning what really influences rainfall in the tropics. To an hypothetical question regarding ‘greening’ the deserts, he responded that he believed we can vegetate the desert areas, but we need to go large scale, possibly 100 km wide, then we can create conditions that will ‘attract’ rain so that the system can self perpetuate. He stressed that the world needs to focus greater attention on water conservation, and that currently about half a billion people around the world face water scarcity, and the situation is getting worse – “Water is a much Bigger issue than Carbon”, he concluded. 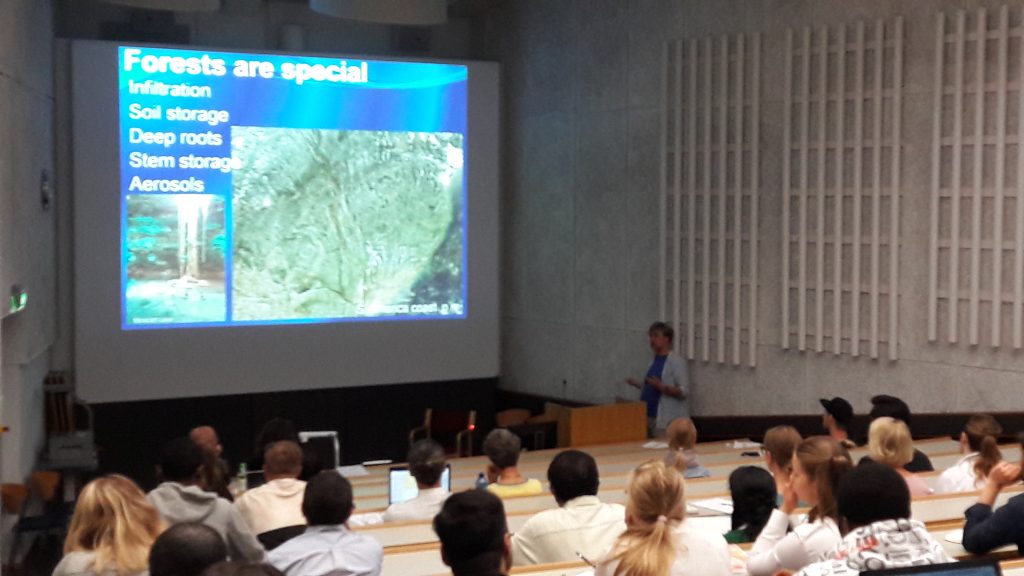 Prof. Kanninen was quite brief in his presentation. He indicated that though the call for sustainability in the production systems of the world’s key agricultural commodities has been fairly recent, for over 200 years forestry and forest management systems have been designed along sustained timber yield principles. He announced that as at August 2, 2017 the world had consumed resources that our planet can sustainably supply in one year – our annual quota. This means we are now taking from the earth what is not due us. He stressed the need for sustainable consumption levels and adoption of more eco-friendly lifestyles and production systems to reduce our ecological footprint to save our planet.

Prof. Maria Brockhaus highlighted the key commodities whose production is contributing significantly to deforestation: palm oil, timber/pulp, soy, beef and cocoa – The Big Five! She indicated that these five commodities alone are reported to contribute to 4 million hectares of forest loss annually. She stressed that we need to internalize the footprint concept practically into our production systems to be able to influence behavioural changes within the various commodity industries. According to her, deforestation and forest degradation goes way beyond the forestry sector therefore focus should be placed on global food chains, policy and regulations within producer countries and non-state actors. She highlighted a situation she described as ‘ politics of unsustainability’ and expressed worry that more and more state actors within producer countries seem to be re-echoing the positions of private sector players responsible for deforestation. According to her state actors need to gain autonomy from the entrenched private interests. She highlighted situations where powerful western countries at the forefront of the fight against deforestation and biodiversity loss were found to as the same time funding businesses that were carrying out deforestation in the tropics. She posed a highly rhetorical and philosophical question, “Who has the right to Deforest?” The question period that followed the three presentations was equally exciting and informative, and speakers had the opportunity to explain further earlier statements made and concepts raised. A fifteen-minute coffee break was given and participants had a great opportunity to interact and network.

The panel discussions commence shortly after the break. The all-female panel was made up of Marisa Camargo, Strategy and Sustainability Expert, Indufor Oy; Yan Peng Ng., Sustainability Specialist, Neste Oy , Maija Kaukonen, Forest Expert, WWF and Tiina Huvio, Program Coordinator, Finnish Agri-agency for Food and Forest Development. The four panel members made short presentations and raised a number of pertinent issues surrounding the objective of achieving ‘zero deforestation’ in the production and supply chains of the five key commodities. Indeed one of the panelist added rubber production as another key commodity causing deforestation in the tropics. They led discussions into what their various organizations were currently doing to help achieve zero deforestation. They stressed the need for a multi-stakeholder approach and the need to focus on livelihoods of the farmers and smallholder actors within the various commodity chains and understand the reasons for their current behaviours in order to be successful in influencing current negative practices. 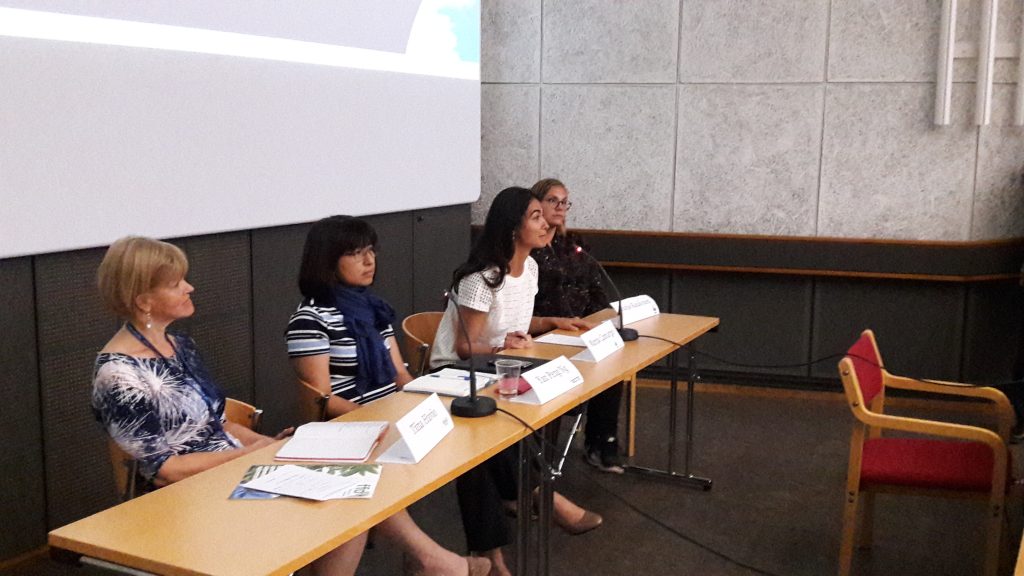 The issue of equitable distribution of benefits was also brought to the fore and all panelist accepted the need for greater for transparency and traceability within the commodity chains to achieve sustainability. A key question posed was “Who benefits from deforestation?”. It is when we achieve sustainable production of these commodities that zero deforestation can be achieved. According to the panelists deforestation is a multifaceted problem and is not just an environmental issue, but also closely linked to economic, social, cultural, fiscal and policy environment within which these industries operate.

The seminar closed around 4.00 pm and participants applauded the high quality of the presentations and discussions that took place and were seen outside in the corridors after the event continuing with the discussions in smaller informal groups. All’s well that ends well.