The Units project held its final symposium at the University of Helsinki August 3rd-5th, 2016. All members of the project were present, in addition to several members of the extended network.

On the first day of our meeting, August 3rd, the project members held an internal meeting to discuss the progress of our publication program, the panel organized by Sandy Thompson and Yoshi Ono for the IPrA conference to be held in Belfast in 2017, for which several members of the project plan to submit abstracts, as well as possibilities for future funding which would allow us to continue our research into units of language and interaction. At the end of the day, Anna Vatanen, Daisuke Yokomori and Tomoko Endo gave a presentation on their joint project on overlapping responses in Finnish, Japanese and Chinese conversation, Ryoko Suzuki reported on corpus building in which the Japanese team has been involved, and Marja-Liisa Helasvuo reported on the progress of the Arkisyn database being developed at the University of Turku.

On August 4th and 5th, we held a symposium featuring talks by project members and members of the extended network. The talks were enthusiastically received and evoked much discussion. At the end of the day on August 5th, a concluding discussion brought up several interesting ideas regarding the nature of units in language and interaction.

After the official program, on August 6th, we took a field trip to the Finnish countryside, where we enjoyed mushroom and berry picking, rowing, taking a sauna, and swimming in a lake. We enjoyed a lunch made from the bounty of the Finnish woods, fields, and waters. A delicious vegetable soup, prepared by Mikko Helasvuo, was the centerpiece of the lunch. We also held a small celebration of the recent birthday of our beloved teacher and mentor, Sandy Thompson.

Below is program for the Helsinki meeting.

The emergence of units in social interaction

9:15 – 10:00 Emergent units: What do we need to change in our approach to grammar? Toshi Nakayama, Tokyo University for Foreign Studies
10:15 – 11:00 Imperatives at work. Elizabeth Couper-Kuhlen, University of Helsinki
11:00 – 11:45 The emergence of clauses in Indonesian conversation. Michael Ewing, University of Melbourne. 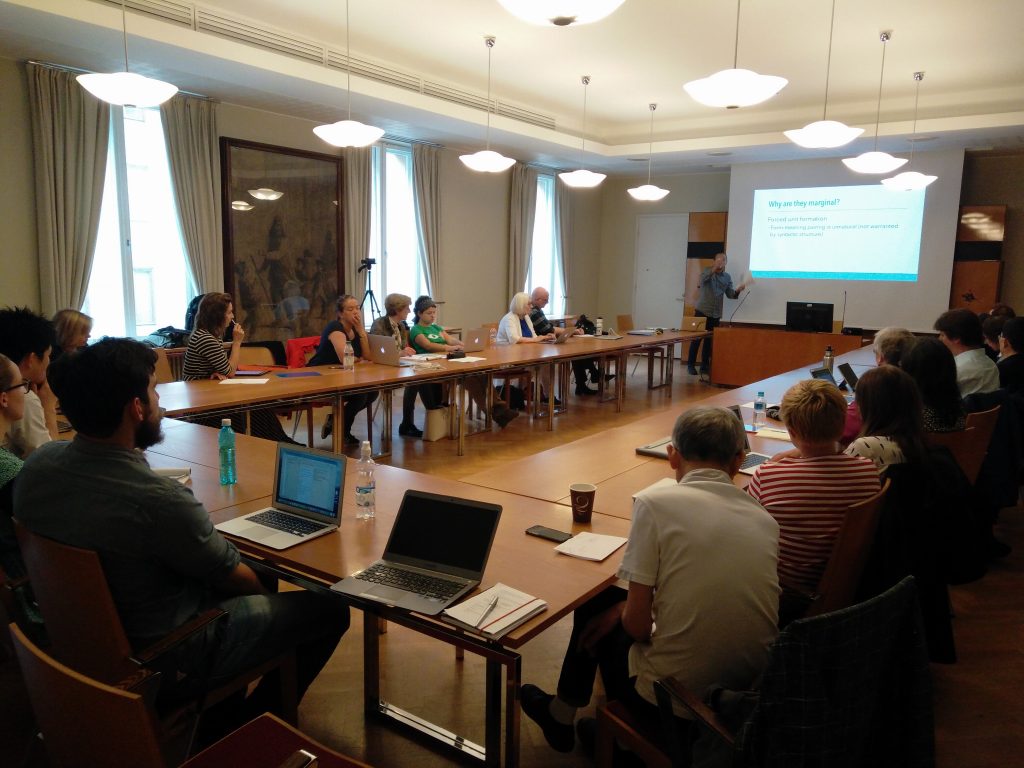 The Units project members, as well as several members of the extended research network met at Keio University in Yokohama and in Naha, Okinawa in March. The program involved a series of meetings, including a project business meeting and presentations on March 11th, an international symposium on March 12th, and a roundtable meeting on March 13th, in which younger Japanese scholars met with members of the Units project to discuss their own research, as well as a symposium on spoken corpora involving Japanese and Finnish scholars. Below are programs for the Yokohama meeting.

14:20-15:45 Vatanen/Endo/Yokomori
• Data Session on cross-linguistic similarities and differences of overlap from structural and interactional points of view

10:00-10:15 Opening by Ryoko Suzuki (Keio University)
10:15-10:30 Toshihide Nakayama (Tokyo University of Foreign Studies): “Noun Phrases in discourse: why and how might they be interesting?”
10:30-11:15 Michael Carter Ewing (University of Melbourne): “Noun Phrases in Indonesian Conversation: Free, Restrained and In-Between”
11:25-12:10 Marja-Liisa Helasvuo (University of Turku): “Argument NPs vs. Free NPs in Finnish: same or different?”
13:30-14:15 Sandra A. Thompson (UC Santa Barbara) and Tsuyoshi Ono (University of Alberta): “A Profile of the “NP” in Japanese conversation”
14:15-15:00 Hongyin Tao (UCLA): “NPs that are not alone: With implications for understanding patterns of conversation grammar”
15:15-16:00 Toshihide Nakayama (Tokyo University of Foreign Studies): “Noun Phrases in Nuuchahnulth: their place in grammar and in discourse”
16:00-16:45 Anna Vatanen and Ritva Laury (University of Helsinki): “The role of the NP in interaction: Projecting turns-in-progress in Finnish conversation”
16:55-17:40 Discussion

10:00-11:30 Roundtable:
Goals and Methods of Linguistic Research Based on Spoken Data
Graduate students and researchers working on spoken discourse in Japan shared their research topics/questions and a discourse data with researchers from overseas.

After Yokohama, we travelled to Naha, Okinawa, where we met with experts on Ryukyuan languages. We heard a presentation by professor Shigehisa Karimata on preservation of these endangered languages, and also met with Nobutaka Takara, a linguist and a native speaker of a Ryukyuan language.

We then travelled to Shanghai to participate in the 2nd International Conference on Interactional Linguistics and Chinese Language Studies at Shanghai Normal University, which took place March 18th-20th, and where we were invited participants. 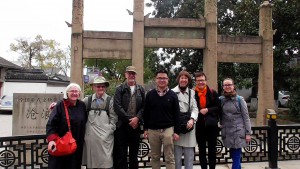 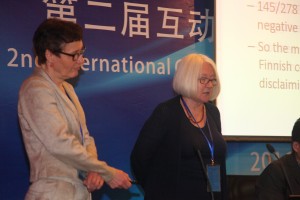 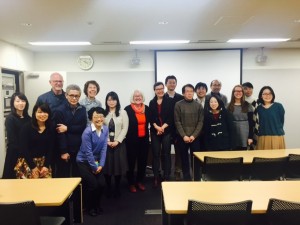 The Units project participated in the International Pragmatics Association’s Antwerp meeting by organizing a panel and having two internal meetings. In addition, several members of the Units project gave papers in other panels.

The panel  on Fixed expressions as units was organized by Marja-Liisa Helasvuo and Ryoko Suzuki and took place on Thursday, July 30th.  The panel occupied two sessions and included eight presentations. Sandy Thompson acted as discussant for both sessions.

Session 1
Ann Weatherall & Leelo Keevallik, ’I understand’-prefaced formulations of the other

Hongyin Tao, Anyway You Slice It, ‘under the Influence’ Is No ‘Quality Time’: Pragmatic Correlates of Diverse Types of Formulaic Expressions

Tsuyoshi Ono, Toshihide Nakayama & Ryoko Suzuki, Fixedness and unithood in Miyako and Japanese conversation: An exploration into the emergence of structure and interaction

The following presentations were also given by the Units project participants at the conference:

Sandra A. Thompson & Tsuyoshi Ono, A usage-based approach to ‘negative scope’: prosody, grammar, cognition, processing, and fixedness, in the panel organized by Mark Dingemanse & Giovanni Rossi on the topic of Pragmatic typology: new methods, concepts and findings in the comparative study of language in use

Ryoko Suzuki & Sandra A. Thompson, Prosody, grammar, and clause combining: so in American English, and  Jan Lindström & Ritva Laury, The interactional emergence of if-requests: constructions, trajectories, and sequences of actions, both in the panel organized by Yael Maschler & Simona Pekarek Doehler, Emergent grammar and praxeological ecologies: Clause-combining and the organization of turns at talk

In addition, Marja-Liisa Helasvuo was a participant in the Roundtable discussion Transcribing, glossing and translating non-English transcripts of social interaction, organized by Maria Egbert and Pirjo Nikanen

The Units project members also held two internal meetings in Antwerp, one of July 28th and the other on July 30th, to discuss the next project meeting to be held in Japan in March 2016, and our possible participation in the upcoming conference on Interactional Linguistics and Chinese Studies to be held in Shanghai, both in March 2016, and the final meeting of the project, to be held in August 2016. In addition, the group discussed plans for upcoming publications, including the progress of the special issue on units offered to Studies in Language, edited by Yoshi Ono, Ryoko Suzuki and Ritva Laury, and the special issue on responsive turns offered to the Journal of Pragmatics and edited by Marja-Liisa Helasvuo, Tomoko Endo and Elise Kärkkäinen, and the prospect of a volume on fixed expressions, to be offered to John Benjamins, possibly for the series Studies in Language and Social Interaction. Yoshi Ono offered to work as editor of this volume, possibly together with Ritva Laury.

The Turku project meeting and 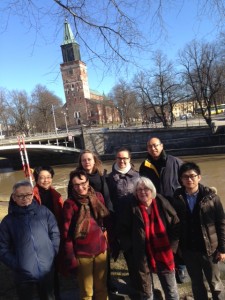 symposium were organized by Marja-Liisa Helasvuo. The event consisted of two days of internal discussions and a two-day symposium on the theme of Units in responsive turns.

On March 6th and 9th the project members discussed their current research. The Japan team gave a presentation on the conversational databases available and under construction in Japan, including data collection by the Japan team members.  Marja-Liisa Helasvuo and her team reported on the status of the Arkisyn conversational database and gave a demonstration of the new interface. Other topics covered were ongoing and future comparative joint projects by the project participants, future project meetings and their timing and aims, as well as future grant applications and a planned volume which will be offered for publication to the Journal of Pragmatics and edited by Marja-Liisa Helasvuo, Tomoko Endo and Elise Kärkkäinen.

The symposium on Units in responsive turns took place on March 7-8 at Fennicum (University of Turku). Both project members and several invited guests from the universities of Helsinki, Linköping, Neuchâtel and Oulu  gave talks on the theme of the symposium. The discussion after the talks was lively. The symposium also included an enjoyable social program.

Sunday, March 8
9:00–9:45   Tomoko Endo: Change­‐of­‐state tokens a and aa in Japanese
9:45–10:30  Aino Koivisto: Finnish aijaa as a stand-alone response and as a part of a multi-unit turn
10:45–11.30  Daisuke Yokomori, Eiko Yasui & Are Hajikano: Registering a chunk of information with a stance: A study of Ne­‐marked other­‐repetitions in Japanese talk-in­‐interaction
11:30–12:00  Evelyne Pochon­‐Berger: Grammar and Interaction: A study of storytelling sequencing practices in French conversations
13:30-­14:15  Marja-­Liisa Helasvuo & Nobufumi Inaba: Units in responsive position: Answers to polar questions in Old Finnish
14:15–15:00  Elise Kärkkäinen: To what extent do language and bodily resources form an action unit in responses to polar interrogatives?
15:00–16:00 Concluding discussion 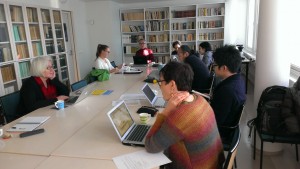 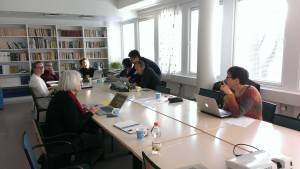 At Keio, we had a two-day internal workshop on November 22nd and 23rd with presentations by professors Suzuki, Laury, Nakayama and Ono as well as Dr. Endo on units in, respectively, Japanese, Finnish, Nuuchahnulth, Miayako and Mandarin conversation, and intense discussions.

In addition, jointly with the Research Institute for the Languages and Cultures  of Asia and Africa at the Tokyo University of Foreign Studies, the Units project organized an open international workshop with the theme Tight and Loose Grammar, which took place on November 29-30 at TUFS.  Below is the program for the workshop, attended by researchers and visitors from ILCAA and other Japanese universities, in addition to the project members and members of the extended research network.  This event was preceded by an invited lecture by prof. Laury on November 28th on the topic of insubordinate ’if’ clauses in Finnish and Swedish, presenting joint research with prof. Jan Lindström. 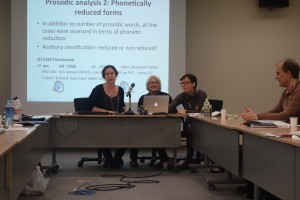 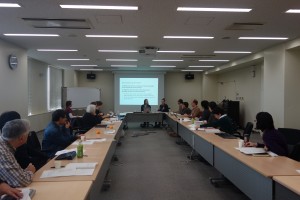 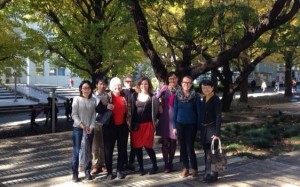 The Finnish and Japanese teams and several members of the extended research network met in Helsinki for a planning workshop which included a one-day visit to the University of Turku and culminated in a two-day symposium with the theme Matches and mismatches of units in interaction. The program for the symposium is below.

At the University of Turku, professor Marja-Liisa Helasvuo and her team introduced the Arkisyn project, a morphosyntactically coded database of Finnish conversation. The two-day workshop held in Helsinki included planning for future events, including an upcoming symposium at TUFS in Tokyo on the topic of Tight and Loose Syntax (November 2014), as well as the panel  which professors Helasvuo and Suzuki have proposed for the International Pragmatics Conference to be held in Antwerp (July 2015). One session was devoted to our future funding prospects.

In addition, our project, in collaboration with the Center of Excellence in Research on Intersubjectivity in Interaction, organized an open seminar on the topic of corpus building and maintenance. This event was well attended by researchers from the University of Helsinki, the Institute for the Languages of Finland, and several other foreign and domestic universities. 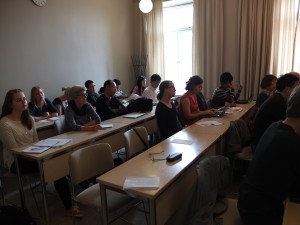 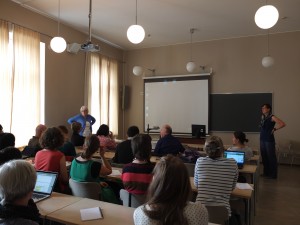 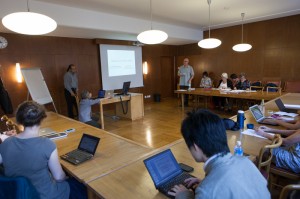 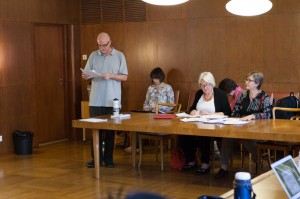 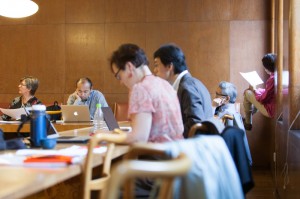 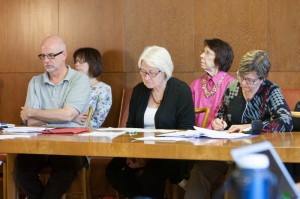 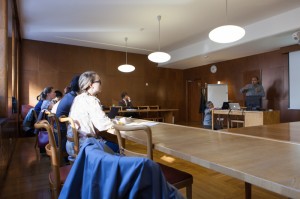 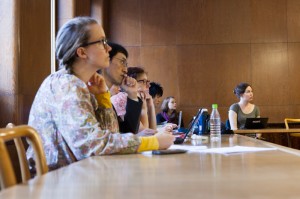