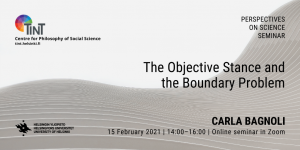 At the next Perspectives on Science seminar on Monday 15.2., Carla Bagnoli (University of Modena & Reggio Emilia) will give a presentation titled “The Objective Stance and the Boundary Problem”. The seminar is organised as a joint seminar with the Moral & Political Philosophy Research Seminar series. The seminar takes place in Zoom from 2 to 4 pm.

This paper investigates some unexplored ambivalences of Strawson’s distinction between the participant stance marked by reactive attitudes, and the objective stance in which such attitudes are deemed inappropriate. First, it is introduced a distinction between recipient-oriented and agent-oriented reasons for taking the objective stance, which are both practical reasons rooted in the agent’s position. The former category of reasons refers to the recipient’s capacities for moral agency, and the latter to the agent’s interests and concerns. Second, it is shown that taking the objective stance for recipient-oriented reasons (i) is a moral move, which alters one’s normative relation to others; and (ii) it may have severe disempowering effects on others. Third, departing from current debates, this investigation refocuses on cases in which the objective stance is grounded on self-defensive or adversarial reasons. The examination of such cases shows that the objective/participant divide stands behind and organizes the complex dynamics through which moral membership is negotiated. Once agent-oriented reasons are brought into focus, it appears that the divide is contestable and renegotiable: the boundaries of the relevant community can be altered by claiming and reclaiming responsibility. Correspondingly, reactive attitudes should be acknowledged as means and drives of the struggle for moral and political recognition.

Carla Bagnoli is Professor of Theoretical Philosophy at the University of Modena & Reggio Emilia. She specializes in the theory of rational agency and practical rationality, meta-ethics, with a particular interest in issues of normativity, and the role of emotions in practical reasoning and agency. Recently, she has held visiting posts at the universities of Paris Panthéon-Sorbonne, ENS Lyon, Oslo, and Oxford. Her articles appear in: Oxford Studies in Normative Ethics, Oxford Studies in Agency and Responsibility, Ethical Theory and Moral Practice, Synthese, Theoria, Philosophia, and Canadian JP. She edited Morality and the Emotions (Oxford UP 2011), and Constructivism in Ethics (Cambridge UP 2013). Her most recent monograph in Italian concerns responsibility, and she is finishing a short monograph on constructivism (Cambridge UP).