In this case study I reflect on the first pilot course from the Iceland Academy of the Arts designed with regard to the ActSHEN principles. It was a short intensive 2 ECTS course called Teach me something. That course took place in November 2014 as a collaboration between the members of ASAD (Arctic Sustainable Arts and Design research group, which is part of the University of the Arctic). The participating universities were Iceland Academy of the Arts, the Sámi University College in Kautokeino Norway and University of Lapland, Finland. The participating teachers along with me were Gunndís Ýr Finnbogadóttir (IAA), Gunnvor Guttorm (SUC), Britta Marakatt Labba (SUC), Elina Härkönen (UOL).

The guiding questions when designing the course were in line with the questions in the original ActCHEN proposal: How can we create a course that generates settings for the participants to develop cross-disciplinary knowledge about and for sustainable development? How can we create settings for master students that are studying duodji (Sami arts and crafts) and students that are artists studying art education for sustainability? How can we create a setting that encourages respect for and about different forms of sustainability knowledge with a focus on student learning from each other in the same group? How can students through collective, participatory art creation nurture a sense of shared responsibility to create shared value for our common future?

The pedagogical approach incorporated a progressive, critical approach where students examined the making and teaching of art as a social act. The course was organised as a combination of students’ research findings and art creation with contemporary art and its social context. The artistic approach is in line with the focus of the process of visible thinking processes which is characterized by being accessible by any age group with the encouragement of peer collaboration. The visible thinking process also leads to development of mind-set growth. It focuses on learning rather than work, promoting independence. This leads to understanding rather than knowledge which is inherently differentiated (Ritchhart et al., 2011).

From the common knowledge and from openness to new knowledge, on ways to make things, ontologies and ways of life, the students created installations and sculptures in groups.

The workshop’s main focus was to find ways to collaborate and to share local and Nordic knowledge. The process focused on generating knowledge through experience and improvisation, some passed on from our past generations. From the common knowledge and from openness to new knowledge, on ways to make things, ontologies and ways of life, the students created installations and sculptures in groups. The activities were all designed so the participants would have potential to develop their practice theories built on complex and ambitious understandings of the link between educational theory and the practice of duodji and contemporary art creation. The first task in the week long course was to share their knowledge starting with the Sami students introducing their findings from the master theses and the other students reflecting and making connections with their own contemporary approaches.

All the participants were expected to take part in critical discussions that included different perspectives. The students were here in the role of facilitator and professionals rather then receivers of knowledge. Because sustainability problems are dependent on many factors we desired to discover complex interconnections. We stressed that they did not have to come to the same conclusion during the process; rather they would come to accept that there are different terms and they have to be willing to work with and respect different perspectives. Through that they had the potential to find common understanding of ethical reasoning, attitudes and values toward sustainable arts and design practises. 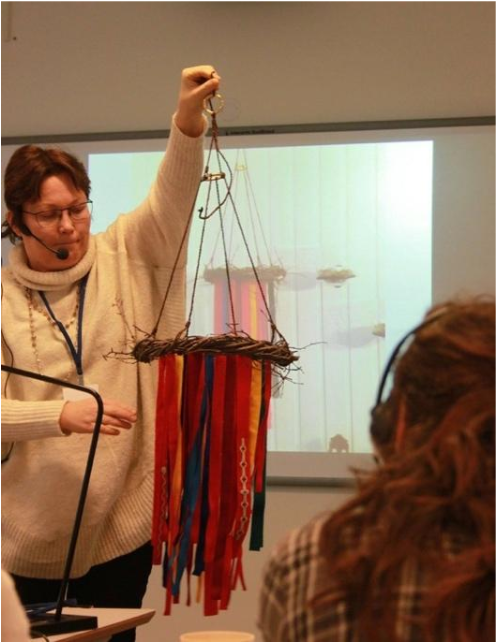 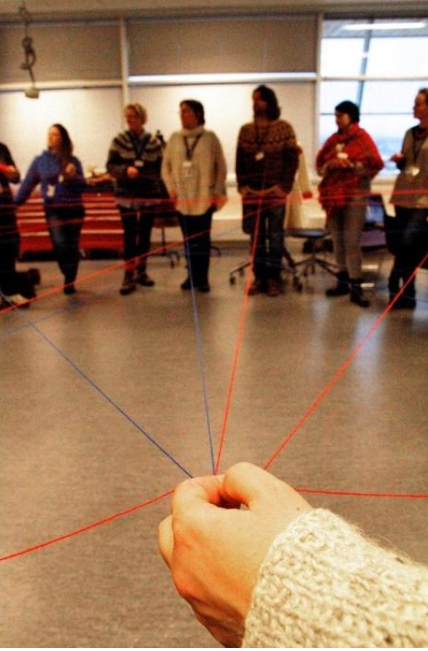 During the first two days along with different team building games organised by the students the participants looked for sustainability themes and created lists that were used to write final assignments which the students collaborated on and exhibited on the fifth day as part of the annual ASAD conference that took place at the Sami University in Kautokeino Norway.

The students developed their ideas and conversations in three art installations using participatory art practices. The whole process was student-led as the students themselves made all the managerial decisions.

Group one entitled their work Connecting the Dots: Celebrating Connectedness it was created from found objects and thread. This piece was about connections and showed curves and intersections between us. The intersections were connections between our cultures. The work was an enjoyable conversation and it was a kind of festival of decorators as everybody suggested references to the culture of the North. In the participants’ opinion, nature is the strongest link between people.

Group two created an Untitled work out of willow branches, reindeer horns and lasso. The circular form represented the earth, sun and moon and is a commonly used symbol in many cultures as in Sami. The work was placed on the hill, not only because it makes the artwork more dynamic, but because to us, it represents tradition that is on the move. Not downhill but forward to distance unknown.

The work by group three was entitled Threads of home. It was made out of textile, thread, paper and reindeer horns. The work was the attempt to link the cultures of those involved in the project. One could say that the threads that went around the lavvu structure (the structure for the cone shaped tent) were also connected to the northern sky. Threads that connect individual stars form a path through the whole star systems. The piece was based on the participants intuition where everyone of us suggested connections to cultural heritage. 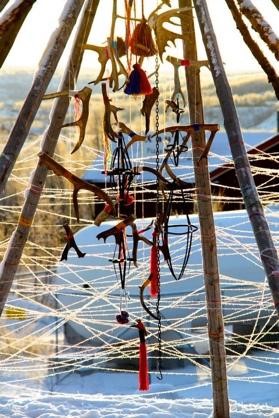 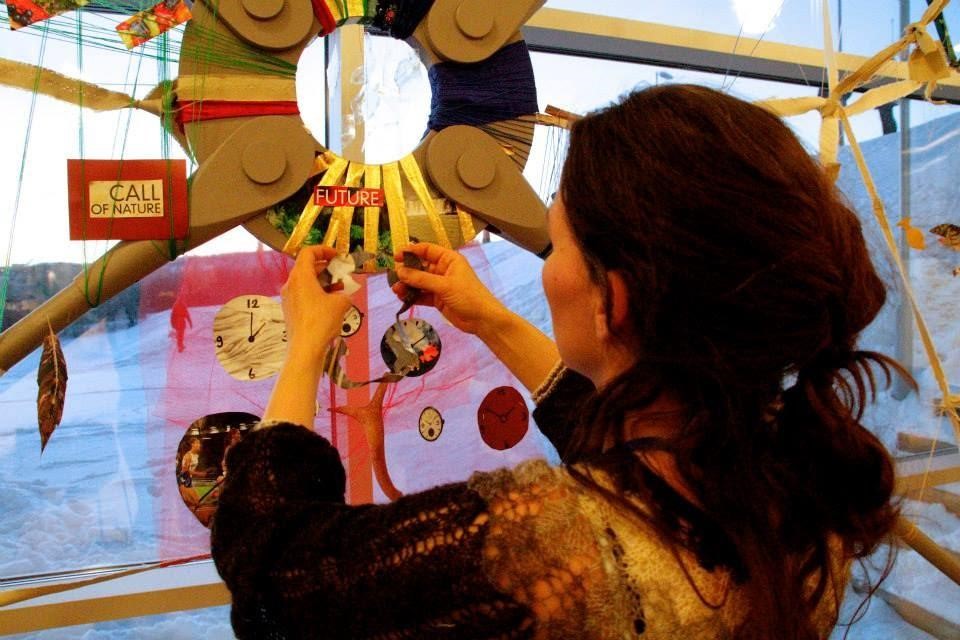 The core values of the course facilitators were shaped by the ActSHEN principles. In the course we did not regard education as a preparation for the future, it is for now.

In the workshop process the focus was on the present moment and learning for the present not only for the future. We looked at the knowledge building as a learning process, which is invitational in nature. This connects to Dewey’s (1938/ 1997) idea of learning by doing. According to his theories meaning-making is a complex and dynamic process. The knowledge building is not a lineal process as it undergoes change; knowledge grows and develops rather than just accumulates.

The focus of the Teach me something course was on the enhancement rather than performance and control.

This connects to the ActSHEN focus on action competence. A desirable indicator of an action competence approach should include quality criteria that enables and promotes learning. The focus of the Teach me something course was on the enhancement rather than performance and control. The criteria reflected on the democratic values that sought to promote, rather than focus on a correct knowledge and behaviour. The course reflected on participating universities institutional as well as individual learning with a strong connection to the need of each learner (Mogensen & Schnack, 2010).

A workshop like this gives potential for comprehensive knowledge development which is in line with what happened in the ActSHEN process of developing the principles and the framework previously discussed in the first case study under the section on vision and values.

[Comprehensive] Knowledge is always gained through action and for action. From this starting point, to question the validity of social knowledge is to question, not how to develop a reflective science about action, but how to develop genuinely well-informed action—how to conduct an action science. (Torbert, 2004)

All the Icelandic participants in the workshop Teach me something belong now to a research group for professionals interested in the potential of art in education for sustainability that functions as a support network for the IAA alumni. One of them has suggested that we should within that setting create a collaborative workshop that would mirror the approach of the course in Norway which indicates positive experience.

The experience of the course indicates the importance of focusing on student driven initiatives, where they take ownership of their own learning, giving them the potential to develop a stronger sense of self. Through their studies students at IAA have developed an intellectual community amongst themselves, which according to Cochran-Smith and Lytle (1993) is a fundamental value for developing teachers’ professionalism.

The ideas of visible thinking approach helped us to make concrete what a thoughtful classroom might look like. It also helped the preservice art teachers to ask themselves if thoughts are visible here. Through the presentations of the students collective artworks it was useful for us to think if the students were explaining things to one another, through visual representations? Are students offering creative ideas? Are they, and I as their teacher, using the language of visual thinking?

Focus on skills and abilities are not enough in transformative education. The key principles of ActSHEN helped us to design the course and keep the focus on student driven initiatives. It helped us and the students to identify and become alert for situations that call for thinking about sustainability issues in connection to different places. It was interesting to listen to when the students discovered how solutions for wicked problems in the Nordic countries are different in regards to local materials, social justice etc.

It was important to create a setting where positive attitudes toward thinking of human rights was fostered. By giving the power to the students we gave them abilities to influence how they learn, how they developed their own attitudes whilst at the same time respecting others, and to become alert of the importance of locating sustainability at the core of their practice theory. The process reflected what we refer to as the three a’s applied simultaneously.