The discourse accompanying the term action competence suggests that action to serve sustainability and the competence to do so are important qualities for citizens. Yet when these citizens are ‘also’ university students and are studying courses in sustainability they might reasonably expect that opportunities will be given to demonstrate action competence within the group and among individuals. This is not always the case. The purpose of this paper is to identify issues of control over learning and planning that appear in sustainability education (SE) lessons and course design. We develop a four phase design framework for use in course planning. Specific reference to courses of study and SE refer to developments over the last decade, and particularly in the last 3-4 years, in the School of Education at the University of Iceland.

Designing a course in sustainability education (SE) could be quite straightforward if the nature of sustainability and the function of SE is not considered to be problematic. Course designers write down a list of all the things they themselves know about sustainability, distribute them across the time allocated, add a list of references, divide that list into manageable pockets of information and prepare a set of assignments, mostly essays and perhaps one or two presentations. Some students make their presentations during regular sessions during the semester and the rest do their presentations at at the end of term.

Many of the second author’s early SE courses as a teacher at the University of Iceland were built on this read-discuss-write approach. For example, one week there had been a news item about open cast mining in Canada with the paradoxical situation of extreme damage to the environment yet excellent social services. Just before the lesson began, she decided to create a classroom activity out of this news, found it online and about 15 minutes later the class was absorbed in considering what might happen in small communities in north-east Iceland if drilling for oil began in earnest. The readings for that week were by the scholar Wolff-Michael Roth (2009, 2010) and many examples were taken from his own experiences in Canada. The students remembered this lesson as ‘the day they went to Canada’. They were deeply engaged throughout the lesson and found the news, readings and discussion quite memorable. Students were happy in this teacher-directed class because they were learning about all sorts of things and found it interesting.

In this example all control of communication about learning was in the hands of the instructor (Bernstein, 2000). Issues of power and specialist knowledge are also relevant and discussed by Bernstein (2000) but they will be addressed in a paper that is in preparation.

The purpose of this paper is to consider issues of control over learning and planning that appear in SE lessons and courses. We consider why some of the control and decision-making could be moved to the students and why this is important. We introduce a four phase design framework suitable for whole course design as well as for the individual learner.

It has been suggested elsewhere that even classes that specifically deal with issues of environmentalism and sustainability “have largely failed at creating change among students” (Frisk and Larson, 2011). Part of the answer might lie in the gap between what is being promoted as desirable action in course discussions and the learning context and the content being studied.

Ideally partnerships between students and faculty would move from high teacher input to fewer teacher directives and even if there is active engagement, the teacher would relinquish some control leading to more student decision making and with the aim of students designing their own research (Bernstein, 2000). Whatever the approach taken there is generally a need for students to become familiar with some definitions and key concepts early on in SE. Thus the first phase in the design, whether it be traditional or aligned with ActSHEN, is concerned with definitions and concepts.

In universities which have taken up quality assurance faculty are required to prepare a set of learning outcomes for every course in which they are the supervising teacher. An example of part of the description of the first course in the School of Education at the University of Iceland is shown in Box 1. The Ministry of Education has published a set of generic learning outcomes for all levels of university education and these have been revised to suit the curriculum of the 10 ECTS compulsory course modeled on earlier courses. 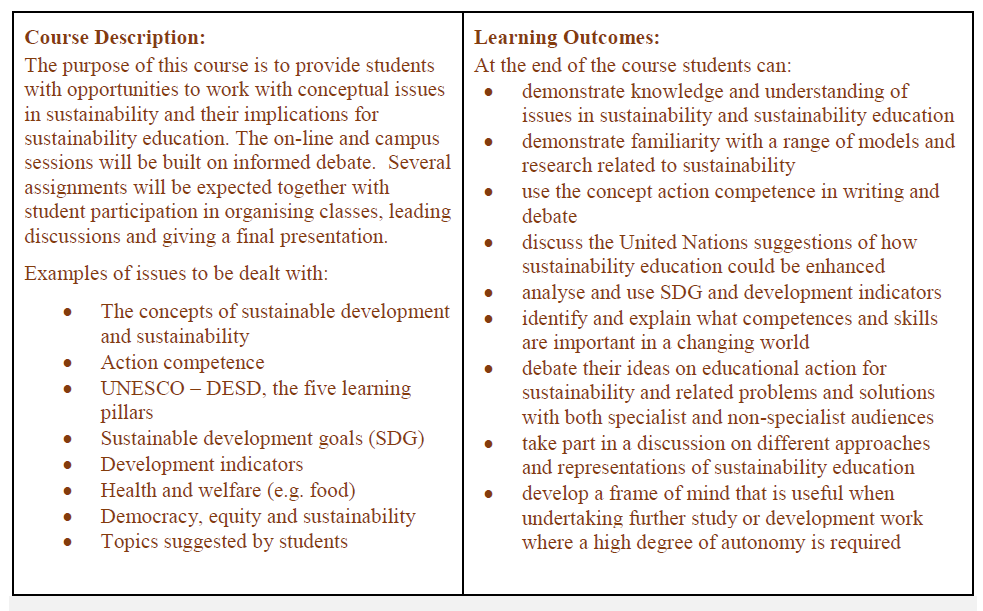 It is at this point that the difference between a traditional and an ActSHEN type of approach begins to emerge. For instructors following the list of learning outcomes there is not much more to do if the class has achieved all the outcomes. However those who prefer to be guided by the course description are now open to suggestions from the students, for example, on extensions of the topics listed or to move on to topics suggested by the students.

Instructors that choose to follow the list of learning outcomes adopt a formal curriculum approach to SE while those on the left would develop a topics based approach as they develop an understanding of key concepts and definitions.

Now that the basics of SE have been introduced it is likely that the approaches will continue to diverge. The instructor could ask the class to identify the issues in which they are most interested and then ask it for ideas on how to pursue these further. On the other hand the instructor could still choose to relate the course to what might be thought of as specialist expertise, either his own or that of guest teachers. This is exactly what we did in our first few courses in 2008-2010. The students did not have much influence on what they were offered although when actually in class they could glean considerable information from the visitors and enjoy. One student referred to the previous week’s guest, a retired philosopher with an interest in cosmopolitanism, as that ‘charming gentleman who was here last week’.

A traditional approach to SE is likely to recycle the material used in phase 1 and 2 as the curriculum demands little more. The second author caught herself doing this one day, said to herself ‘lazy slob’ and put her old files away, setting herself the task of developing assignments that would require new forms of assessment and more contextualised learning.

In the School of Education there are two advanced courses after the basic one described in Box 1. One is on sustainability and individual learning, and the other on sustainability and organisational learning. There is full reason to open the floor to the students’ ideas, interests and concerns in these two courses. The instructor can work with the students on finding ways for them  to cooperate with each other and to move beyond definitions and topics to interpretations. The instructor could encourage students by offering them two-dimensional assignments which is what we have chosen to call projects which offer students both a choice of content and of method (see case study on open assessment under the pedagogy section).

Action competence is a thread running through all our courses and students enrolled in the two advanced courses would be expected to develop this and make it visible. Whereas the first course and the first two phases are typically ‘classroom based’ the later courses could find students out in the community or in new learning contexts (see case study on contextual learning under the pedagogy section) improving their action competence. The students should have the opportunity to work with each other or in the community, integrating their studies and their experiences and bringing these back to class for discussion.

With this addition we expand our ActSHEN-initiated approach to one of concepts-experience-reflection-discussion.

A logical next step to these first three phases is to move towards a balanced relationship between teacher and student in which there is overt partnership and research and development work and other forms of production become possible, such as grant applications (see also the discussion on poetry in the open assessment case under the pedagogy section).

A design framework for learning, research and planning

The points raised in the previous section can be summarised in a four phase design framework (Table 1), the first three phases being curriculum-based lessons, instructor-based lessons and cooperation and integration. The fourth phase calls for partnership, planning and production. The change in emphasis between one phase and the next is summarised in Table 2.

Table 1 Elements of a design framework 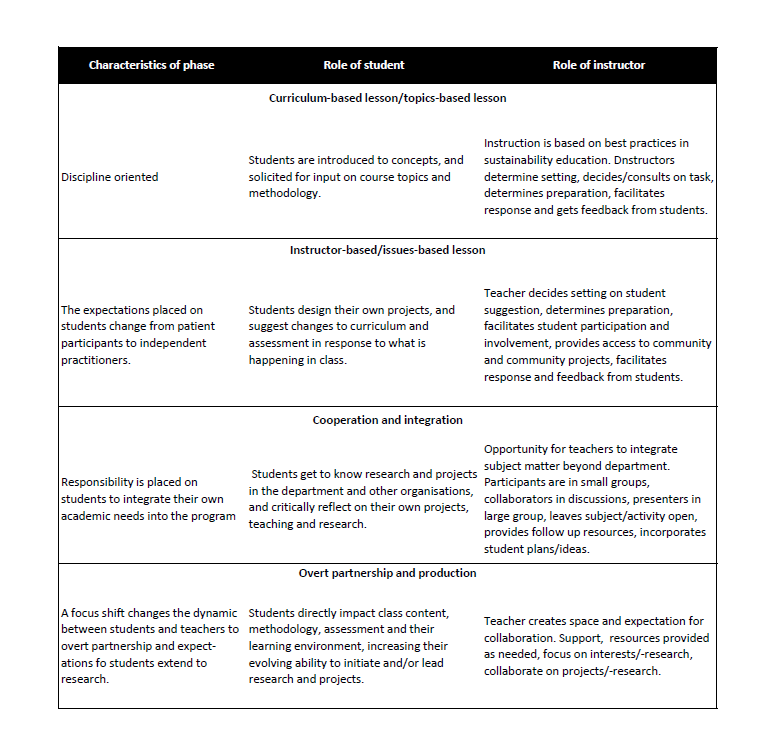 We suggest that the traditional approach to SE does not go much beyond the second phase. One key difference is the use of contextual learning opportunities, what Deurden and Witt (2010) described in findings for their own study as the direct experiences that appear “…to have acted as a catalyst, converting pre-existing knowledge into action”  to allow students to learn about complex and abstract ideas within the context of the issue.  These experiences may be off site though can also be virtual cases and are usually based on high student participation and engagement.  In this way, contextual learning fits well into the four phase system and is discussed further by us in another case.

Later in this set of case studies we will describe what we call ‘open assessment’ meaning that the form of assessment needed is not apparent until the assignment has been completed.

Whereas the performance of students in courses operating within phases 1 and 2 can be assessed through traditional and often standardised means, such as essays and presentations, this is not necessarily the case with phases 3 and 4. These two, cooperation and integration, and overt partnership, are likely to need something like ‘open assessment’ (discussed further in another case). Work at this level calls for students to make sure their own learning needs are being met, and calls for assignments which allow students to formally reflect on their own expertise and the value base from which they work. Here opportunities are provided for students to learn about the ongoing research and practices within the community, and enables students to initiate and lead projects in partnership with instructors.

The examples of contextualised learning given here are discussed further in another case.

The purpose of analysing our SE courses and classes has been to reframe the discussion around sustainability and SE and learn how we and/or students take action or demonstrate action competence. A framework designed to account for the variety of roles of teachers and students in different versions of SE has been presented  here for discussion. The analysis gives rise to four phases. The ActSHEN project aimed to develop ways to involve students more in the design and implementation of sustainability in higher education. This small study has shown how complex this aim really is, and we must concede that this is not ‘a one size fits all´solution. Although Huckle (1995) has argued that SE is a “frame of mind” we would suggest that providing meaningful SE is more subtle and more complicated than developing a frame of mind. At the same time it would be dangerous to conclude that the characteristics of one phase are better than another; they each have their purpose.