“Act of the Scribe: Transmitting Linguistic Knowledge and Scribal Practices in Graeco-Roman Antiquity” is a project funded by the Academy of Finland from September 2015 to August 2019. We work at the Department of World Cultures in the University of Helsinki. 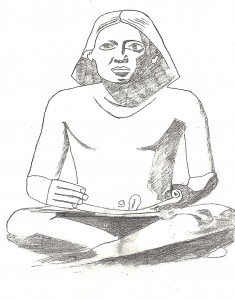 The languages of Graeco-Roman antiquity can only be studied through writing. Papyri, wooden tablets and potsherds preserve us the writing directly from the pen of the ancient writer. He was usually a middleman, a scribe educated for a certain task, be it merely to write a simple text on the papyrus from dictation or to compile an administrative document from scratch. Linguistic research of Greek and Latin has seen a rise in recent decades. However, the role of the scribe in the linguistic outcome has thus far been overlooked. Many nonstandard features, such as language contact effects, are visible in the texts due to the scribe’s personal linguistic background. This project will study the mechanisms of the language production in order to separate the technical effects from the linguistic and cognitive processes. This enables us to pinpoint the scribe’s part in language change. The methodology created in this project will aid other scholars studying language change in written corpora.

The ancient languages have mostly been seen as relics in a frozen point in history instead of treating them as the living languages they once were with nonstandard varieties and different registers. In recent decades, however, especially contact effects between Greek and Egyptian as well as Greek and Latin have been studied to some detail, but so far, linguistic study has concentrated on loan transfer, bilingualism and diglossia, i.e. various examples of the outcome of the contact.

One important aspect previously overlooked is the role of the scribe in tracing diachronic linguistic change. The main focus of our project is on how the scribal production’s cognitive and technical properties affected their linguistic outcome. In addition, we will show the importance of examining individual language use in a broader language situation. Scribes bore varied levels of competence depending on their education, amount of bilingualism, and personal language skills.