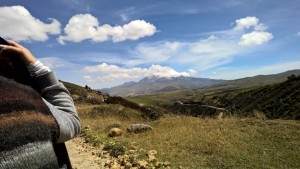 I had a chance to take part in the field trip in Ecuador that was organized for geography students last October (18.10.-31.10.2015). Our group was formed by 2 lecturers and 14 students from the University of Helsinki and 8 Ecuadorian students from the Universidad Estatal Amazónica (UEA) based in Puyo. We started the field trip from Quito, the capital of Ecuador by visiting some Ministries (and we even met a Minister!) and activists. We had carried out literature review earlier before the trip and this was the first time we could get firsthand information for our research projects. We had 4 different research topics, which I won’t explain in detail, and concerning deforestation, tourism and hydroelectric projects, accessibility of schools and ethnicity of indigenous Kichwa. You can learn more when the report gets printed out and published online. 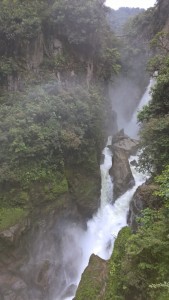 Our field trip continued from Quito through the beautiful city of Baños, surrounded by amazing waterfalls and cloud forest. As we reached Puyo and the local University UEA, we met the Ecuadorian students taking part in the field trip. The research would then be carried out by groups that had both Ecuadorian and Finnish students involved. Once we got to the Pastaza province, we stayed at the CIPCA research station, which was located near small town of Santa Clara. Typical morning at CIPCA started waking up to a rooster crow way too early. If it wasn’t the rooster, then it was some exotic bird that I couldn’t name. We got up early, had breakfast at the station cafeteria and after that we spread out to go on with our research in the field. I was in the ethnicity group, which worked closely together with the accessibility group. Over the next days we conducted interviews and carried out surveys at the schools of Santa Clara, Ahuano and Sarayaku. The two nights trip to Sarayaku was a once in a life time chance to visit a remote community in the Ecuadorian Amazon. Getting there meant a long canoe trip along the Bobonaza River and the return trip to Puyo was made by small aircrafts. Walking the same paths that the children use to get to their local village schools was an adventure in itself. 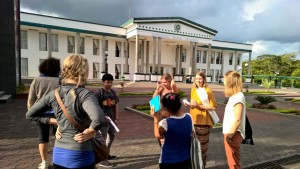 Presenting our research results at a formal event at the UEA was the great finale after working hard to get the data and analysis together. The presentations were given partly in Spanish, partly in English at the auditorium with full audience. Some of the local lecturers gave their comments and what really made the occasion special was that we were handed diplomas. After stressing out how the presentations would turn out, this moment was full of joy and relief! Unfortunately it was also a time to say goodbye to our Ecuadorian friends as we started our journey back home. At the end of the field trip we still had few days off, which we spent in Finnish like temperatures in Oyacachi that is located in the Andes around 3500 meters above the sea level. 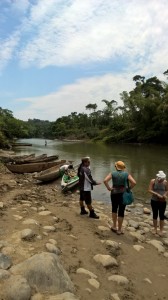 Getting ready for the canoe trip to Sarayaku

For me this was the first time in South America so the trip was full of new experiences. As I only knew few words (gracias, uno, dos, tres…) in Spanish, I was somewhat dependent on the translations provided by my fellow students. Obviously this could be quite frustrating and required an extra effort from others involved. The whole experience was a great lesson on how to do fieldwork in practice. Making decisions in a group had its own challenges, especially when there were conflicting interests among and between groups. Fieldwork also meant long hours sometimes without food and in this case in tropical conditions. It was also dealing with uncertainties as in the field things have a tendency to unfold differently than originally planned. Some things can’t be planned and it’s constant adapting to the new situations. Time gets whole new meanings and you better get used to waiting as moving in a big group isn’t always that smooth. 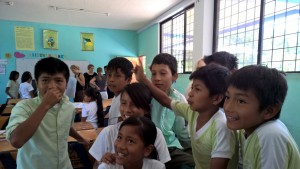 Despite all written above, we did have numerous unforgettable moments. The field trip made it possible to visit class rooms, conduct small surveys with children, interview teachers, principals and parents and interact with local people in a way that you normally wouldn’t. At the end of the day we had carried out a proper field research. That’s quite remarkable considering the limitations of time and defective language skills. All in all, the experience was amazing and it’s hard to put in words all the emotions and explain everything that happened during those two weeks. However, I do encourage everyone to go out there, travel, explore and take the chance of making a field research! 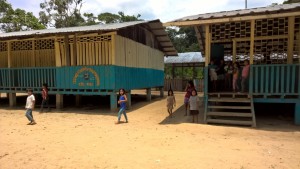 Children in front of the Kali Kali school in Sarayaku